Over the last two weeks, the Royal Australian Navy has been evacuating thousands of residents fleeing uncontrollable bushfires in the south-eastern part of my country. Amid scenes of desperate Australians being rescued from beaches, national-security writer Craig Hooper has called the operation a “mini-Dunkirk.”

At least 24 lives have been lost, and many others are missing. Hundreds of homes and businesses have been incinerated, as have more than 60,000 square kilometres of bushland. The Premier of my home state of New South Wales, the region that’s been worst affected, describes the crisis as “uncharted territory,” with some towns at risk of being completely wiped out. Prime Minister Scott Morrison, who took a brief holiday at the start of the crisis, has been accused of poor leadership. And critics have taken the opportunity to demand that Australia’s climate policy be immediately overhauled to reflect this national disaster.

But what exactly is causing this year’s extreme fire season? Climate change? Arson? Drought? In fact, it’s all of the above.

In 2019, short-term weather fluctuations in the Indian Ocean—the Indian Ocean Dipole, as scientists call it—pushed moist ocean air away from Australia’s shores, causing a severe drought, and drying out the leaves, sticks and soil on the bush floor.

This has come in tandem with unusually strong and sustained winds associated with a separate phenomenon known as the Antarctic Oscillation, which have pushed fires in all directions, turning isolated local crises into regional disasters. And of course all of this comes amid a steady increase in average temperatures across Australia, a phenomenon that climate scientists have warned us about for decades. They also have correctly predicted that long-term climate-change trends will increasingly interact disastrously with short-term climate phenomena in a way that catalyses and exacerbates extreme weather events. 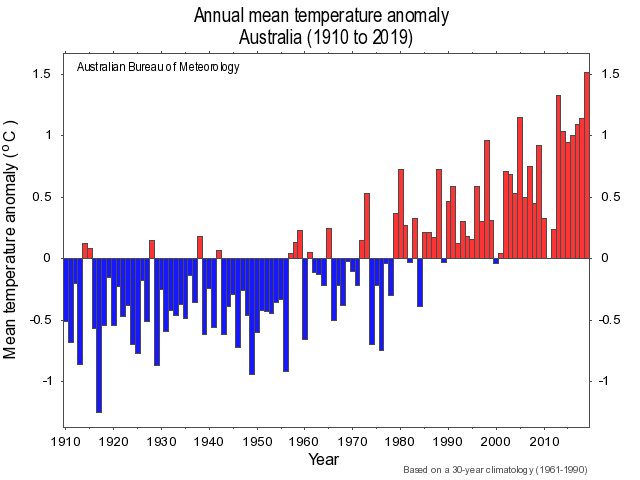 Unfortunately, successive Australian governments have failed to adequately heed these warnings. A more aggressive use of controlled burns might have given firefighters a chance to control this season’s bushfires. But, as has been the case in other nations, climate policy in Australia has been mired in partisan politics, with both sides using the issue to score points instead of implementing sensible and pragmatic policies.

Conservatives in Australia, under the leadership of former Prime Minister Tony Abbott, have rejected warnings about long-term climate trends. The Greens, on the other hand, err in the other direction, inventing direct causal relationships between individual politicians and unusual weather events, implying that short-term weather trends can be manipulated by national governments. Both approaches are wrong.

As recent events show, variations in the aforementioned Indian Ocean Dipole (IOD) can make Australian weather patterns inherently volatile, especially since the drying effects of a positive IOD phase often coincide with El Niño events in the Southern Pacific, which weaken (or reverse) the trade winds that bring rain to Australia from the east. (Indeed, an El Niño did arise in 2018-19, though its effects ended in late summer.) When the Black Saturday bushfires occurred in 2009, killing 173 Australians, the IOD was in a positive phase, as it is now. The same was true of the Ash Wednesday bushfires in 1982, which killed 75.

Although climate change affects the entire planet, the sudden stratospheric warming taking place above Antarctica has a particularly acute effect on Australia. The phenomenon, identified and named by Melbourne Bureau of Meteorology scientist Eun-Pa Lim, has caused an astounding 40-degree spike in localised upper-atmosphere temperatures. Lim predicted that this would exacerbate the spread of hot, dry winds across eastern Australia. And she was right.

Since at least the 1990s, researchers at Australia’s preeminent science organisation, the Commonwealth Scientific and Industrial Research Organisation (CSIRO), have warned that fire frequency would increase thanks to global warming. In 2005, a CSIRO research team published a report entitled Climate Change Impacts on Fire-Weather in South-East Australia, which concluded that “the combined frequencies of days with very high and extreme Forest Fire Danger Index ratings are likely to increase 4-25% by 2020 and 15-70% by 2050.” We can’t say we weren’t warned.

Local inaction also has contributed to this season’s catastrophe. CSIRO scientist David Packman has been warning governments for years to reduce fuel loads on the bush floor through controlled burns (also known as “prescribed burning”—or “backburning” when done on an emergency basis). Speaking to Sky News recently, Packman noted that the available fuel loads for fires now are “10 times greater” than existed before European settlement. “The concept has been [that] every fire is a bad fire,” he explained. But “in the Australian context, you need fire to keep the bush healthy and safe.” (When asked about the areas most at risk, Packman identified the north-facing slopes of the Dandenong Ranges east of Melbourne, Victoria, site of the Black Saturday tragedy. Future fires, he predicted, could produce death tolls in four figures.)

In 2002, a Parliamentary inquiry into bushfires noted substantial political resistance to fuel-reduction/controlled-burn strategies. “The fundamental issue in carrying out fuel reduction burning close to urban areas is that many of the inhabitants prefer living in green leafy bushland,” wrote Bill McCormick of the government’s Science, Technology, Environment and Resources Group. “Burning can be unpleasant, reduce amenity, kill plants and wildlife, and cause pollution so there is a build-up of political resistance to increasing the frequencies and proximity of the burns.” Another study found that the pollution caused by backburning aggravated health conditions in vulnerable people, likely causing premature deaths.

So what are Australians to do? Firstly, we need to depoliticise the issue of climate change. It should not be considered a “left-wing” issue, and the overwhelming evidence indicating the reality of anthropogenic climate change needs to be decoupled from moral arguments in favour of proposed solutions. It should be recognized that fair-minded and reasonable people can agree with the reality of climate change, while disagreeing about the best way to tackle it.

In some cases, ideological inflexibility has obstructed incremental measures that were at one point politically feasible. When a Carbon Pollution Reduction Scheme was introduced by a majority centre-left Labor government in 2009, the plan attracted the support of Australia’s centre-right Liberal Party, then under the leadership of Malcolm Turnbull. But it was the Greens who blocked the measure for not going far enough. The country has lacked a proactive policy ever since.

Today, Green MPs tweet about bushfires being directly caused by particular politicians, and fantasise about “climate trials,” at which their political opponents are tried (and presumably convicted). All this does is inflame conservatives, who feel that the climate-change issue is exaggerated and exploited for partisan reasons.

But conservatives must also wake up. It is hypocritical to complain about science denial when it comes to the reality of biological sex or gender differences while at the same time denying that the predictions made by climate scientists years ago are generally coming true. While all scientific and empirical claims should be subjected to scrutiny and doubt, it is unwise to simply dismiss entire fields of research out of hand. Trust in the scientific method should not be domain-specific.

Secondly, we need to talk about solutions to climate change that go beyond reducing consumption. Anyone who can read a graph knows that emission reductions made in rich countries are easily cancelled out by increases in emissions from developing countries. 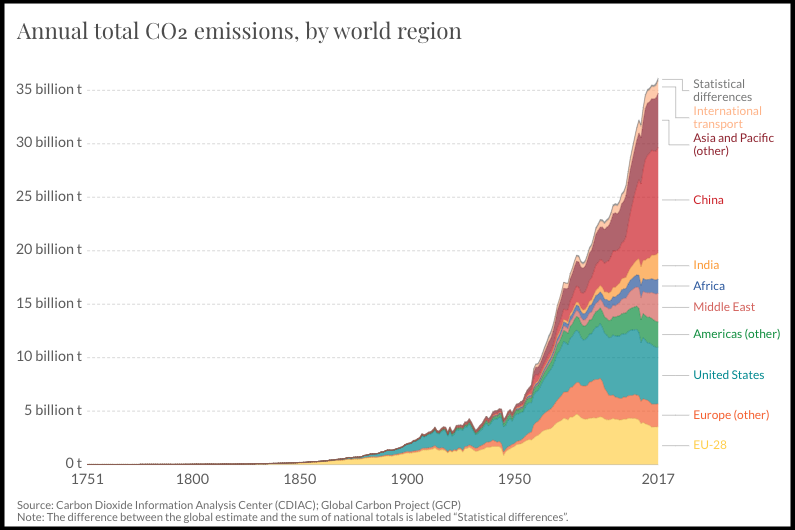 Unless rich countries want to start forcing poorer countries to stop improving their living standards, we’re not going to be able to deindustrialise our way out of this problem. We need to find a way to make clean energy cheap, not just make dirty energy expensive. Consider that Australia holds 33% of the world’s uranium deposits, and yet does not have a single plant generating (zero-emission) nuclear power. We also have a tremendously under-utilized capacity for hydrogen exports.

Rather than tweeting about fictional climate trials, politicians in wealthy nations such as Australia should be investing in research that will yield scalable and reliable clean-energy technologies. This can be done in a way that respects legitimate concerns about jobs in legacy energy sectors such as coal, which have provided a livelihood to generations of blue collar and middle-class workers.

The sight of huddled masses escaping the ravages of mother nature has created anxiety among victims, politicians and activists alike. And Australia’s leaders, past and present, should be held to account for the many missed opportunities they had to mitigate the damage that bushfires cause. But scapegoating these leaders for complicated climate phenomena will do nothing to stop the fires, much less cool the planet. Confronting the problem of climate change is one of the biggest challenges of our time—a global Apollo Mission for the 21st Century. With visionary leadership, resource-rich nations such as Australia can help establish a path forward. Once the immediate crisis is over, we must make that happen.

Correction: A previous version of this article indicated that Melbourne Bureau of Meteorology scientist Eun-Pa Lim had detected an 18C spike in localised upper-atmosphere temperatures near Antarctica. The actual figure is 40C.