China’s suppression of political dissent within its borders is old news. But more recently, the Chinese government has managed to project its power across the world—and even into the heart of an iconic American business sector: professional basketball. 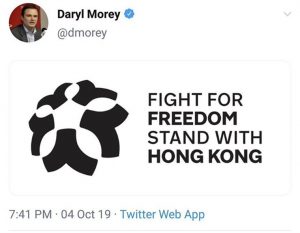 The saga began when Houston Rockets General Manager Daryl Morey—a well-known figure within the National Basketball Association (NBA)—Tweeted support for ongoing pro-democracy protests in Hong Kong. The Chinese consulate in Houston signaled its displeasure, with a statement indicating that it had “lodged representations and expressed strong dissatisfaction with the Houston Rockets, and urged the latter to correct the error and take immediate concrete measures to eliminate the adverse impact.”

Morey seemed to receive the message. He hastily deleted his Tweet. But the NBA—which is the most popular sports league in China—paid a price anyway. A series of NBA events in China were abruptly canceled, and a number of firms suspended co-operation with the Rockets.

Two days following Morey’s Tweet, the NBA released an official statement distancing itself from the Rockets GM, lamenting that Morey’s pro-democracy statement has “deeply offended many of our friends and fans in China, which is regrettable.” The league insisted that it has “great respect for the history and culture of China.” Putting aside the fact that Morey hadn’t criticized China’s “history and culture,” the statement seemed bewildering: How did it come to be that a multi-billion-dollar American sports league was apologizing to the Communist Party of China?

NBA Commissioner Adam Silver soon shifted into damage control mode, this time in the opposite direction, and insisted that the “NBA will not put itself into a position of regulating what players, employees and team owners will say or will not say on these issues.” Yet many of the NBA’s stars have been reluctant to back up Morey, who now has gone silent on the issue. Golden State Warriors coach Steve Kerr, a frequent and unrelenting critic of U.S. President Donald Trump, certainly didn’t seem too bothered by Chinese human-rights abuses when asked about them at a press event. “It has not come up in terms of people asking me about it, people discussing it, no,” he said.

Kerr shifted into cultural relativism: “Nor has our record of human rights abuses up either. You know, things that our country needs to look at and resolve, that hasn’t come up ether. So none of us are perfect. And we all have different issues that we have to get to.” He then went on to mention American mass shootings—as if the actions of criminals could be compared with those of a government.

LeBron James of the Los Angeles Lakers, one of the best NBA players in league history and a big-hearted philanthropist, also has no problem criticizing Trump. But when asked about Morey’s Tweet, he accused his colleague of being ignorant, and adopted the language of social-justice activists who claim that even fairly banal political speech can cause harm. “I don’t want to get into a word or sentence feud with Daryl, with Daryl Morey, but I believe he wasn’t educated on the situation at hand, and spoke,” James proclaimed. “And so many people could have been harmed, not only financially but physically, emotionally, spiritually. So just be careful what we tweet, what we say, and what we do, even though yes, we do have freedom of speech, but there can be a lot of negative that comes with that, too.”

Lakers’ LeBron James on NBA’s China controversy: “I don’t want to get into a … feud with Daryl Morey but I believe he wasn’t educated on the situation at hand and he spoke.” pic.twitter.com/KKrMNU0dKR

(On Monday, James even seemed to present himself as the victim, Tweeting, “my team and this league just went through a difficult week. I think people need to understand what a tweet or statement can do to others. And I believe nobody stopped and considered what would happen. Could have waited a week to send it.”)

My team and this league just went through a difficult week. I think people need to understand what a tweet or statement can do to others. And I believe nobody stopped and considered what would happen. Could have waited a week to send it.

But while the NBA has attracted enormous attention for kowtowing to Beijing, it isn’t alone. Activision Blizzard, the digital studio that has produced such popular videogames as Overwatch, Call of Duty and Starcraft, punished a player who, during a livestream, expressed support for Hong Kong’s anti-Beijing protests. The company brags about its approach to diversity and inclusion—but these values apparently do not extend to the Hong Kong teens being tear-gassed, or to the Uighur Muslims being imprisoned in Xinjiang province.

One Blizzard employee told Vice News that people in the company feels trapped: “We’re damned if we don’t take a stand—we’ll have lost a lot of support from fans outside of China. We’re damned if we do—you can’t keep the lights on when we lose income from China and [other companies] swoop in to take our place…Even if I did leave [for another employer], where would I go that’s not beholden to access or income from China today or tomorrow?”

That’s presumably the thinking behind Nike’s decision to remove merchandise featuring the Houston Rockets from stores in major Chinese cities. Yet this is the same company that recently built its brand around former National Football League quarterback Colin Kaepernick, who famously failed to find work after taking a knee during the national anthem as a means to protest police brutality.

“Believe in something, even if it means sacrificing everything,” Kaepernick intoned in Nike commercials released in 2018. It turns out the company itself isn’t quite ready to sacrifice its Chinese business interests—let alone “everything.”

Indeed, it may soon be more difficult to find a major firm that isn’t censoring itself in some way to maintain business ties with China. At Mashable, Natasha Pinon has compiled a list of companies that have self-censored in response to Chinese pressure. They include Audi, which “used a China map at a press conference that excluded Taiwan, South Tibet, and parts of the Xinjiang region; then apologized for their ‘incorrect geographical map’”; Disney/ESPN (“An internal memo distributed to ESPN employees prohibits reference to Chinese politics when alluding to a supportive tweet for Hong Kong protesters”); and Mercedes-Benz (“posted an Instagram photo accompanied by a quote from the Dalai Lama, then deleted the post, and offered a public apology to the Chinese people”).

At one level, it makes a certain kind of sense that some of America’s wokest companies are bending over backwards to avoid offending a dictatorship: America’s supply chain is deeply interwoven with China’s industrial back office, and it’s a massive growth market that presents western executives with hundreds of millions of new customers. But we are also asked to pretend that our corporate overlords have a moral compass, and that their much-vaunted mission statements and corporate social-responsibility pledges are meaningful.

Take the example of Delta, the world’s second biggest airline. The Atlanta-based company has for years benefited from a lucrative jet-fuel subsidy provided by the state of Georgia, but lost access to those funds in 2015 after its leadership lobbied against a “religious freedom” bill that many feared would empower conservative Georgian businesses to discriminate against gays and lesbians. Republican lawmakers were so offended by Delta’s stand that they ended the subsidy.

In 2018, lawmakers considered reviving the $40-million-a-year program. But Delta once again stepped into the culture wars, ending a discounted-fare contract for members of the National Rifle Association, a pro-gun-rights group. This act of virtue-signalling probably got Delta more than a few customers: Its Tweet announcing the policy change earned more than 470,000 likes. Yet Delta really wasn’t giving up very much: It apparently had sold only 13 tickets under the NRA contract.

The company made this announcement during a heated Republican gubernatorial primary, causing all of the candidates to come out against the subsidy, which died in the legislature, while Democrats in Georgia and elsewhere vigorously proclaimed that they’d be happy to subsidize Delta. Ultimately, the Republican Governor quietly restored the jet fuel subsidy, ensuring that Delta was able to have its cake and eat it, too.

Georgia’s taxpayers lost and Delta won, because the fight was never really about selling a few tickets to the NRA or religious freedom. It was always about money. And so it’s no surprise that this same company, which talked so tough to a state government, meekly apologized to China for listing Taiwan as an independent country on its website: Delta officials knew that their lobbyists didn’t have as much entrée in Beijing as they did in Atlanta.

China’s ability to make America’s biggest companies dance to its tune exposes woke capitalism as the sanctimonious scam that it is. Corporations don’t have intersectional ethics. They have bottom lines. In some cases, the two overlap—as when Delta bashed the NRA for brownie points. But often times, they don’t—as when Delta aroused Beijing’s ire over Taiwan. And remember that Nike, the same company that wants to save the world from police brutality, made its fortune in large part by peddling overpriced sneakers as status symbols for poor black teenagers.

In Hong Kong, Xianjang, Syria and elsewhere, protestors are risking everything to speak out against dictatorial regimes. The least we Westerners can do is express solidarity with them. While we cannot force corporations to join us, we can take stock of their cowardice. And when these same companies come back at us in a few months with some earnest new ad campaign built around a fashionable domestic social-justice cause, we should call them out on their bald-faced hypocrisy.

Zaid Jilani, a journalist, is currently on fellowship, studying political and social polarization at UC Berkeley’s Greater Good Science Center. Follow him on Twitter at @ZaidJilani.

Feature image: LeBron James, of the Los Angeles Lakers, can be seen on the promotional tour “More than an athlete.” Berlin, Germany. 02nd Sep, 2018.