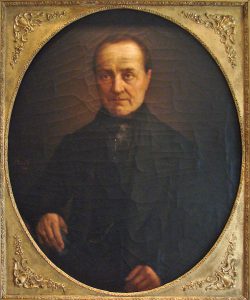 Auguste Comte was one of the most famous and admired thinkers of the early nineteenth century, but fell into obscurity in the course of the twentieth. This is a shame, because Comte’s philosophy is an optimistic one, and his methods are useful in resolving many of the problems we face in the West today.

Comte is best known as the inventor of positivism. His “law of three stages” theory earned him admirers such as John Stuart Mill in England, the Young Turks (not the YouTube commentators), and nineteenth century Mexican educational reformers. The motto ordem e progresso (order and progress) on the Brazilian flag is derived directly from Comte’s ideas.

Comte believed that societies naturally progress to the positive stage due to the human hunger for intellectual maturation. Comte’s theory therefore looks keenly towards the future. But it also looks fondly upon the past. According to Comte, every generation is more privileged than the last, because every generation has behind it a larger fund of learning and vicarious experience from which to draw in confronting its problems.

The idea that the past often holds the key to the future might seem obvious, but its acceptance is not widespread. The inherent danger of progressing to the third stage, as we are now seeing, is that our hunger for progress leads us to jettison what is tried and tested for what is different or new. This inclination may be desirable in fields like science and technology, but it is leading us down darker paths in the realms of aesthetics and politics.

Consider the examples of architecture, easel painting, and literature. In these fields, the trend is not to build on the past but to consciously break away from it. Painting passed through several golden ages, from romanticism to impressionism to surrealism, but has today devolved into the dots and random lines of abstract expressionism. Architecture had several golden eras, but the latter ones—brutalism, late modernism, and deconstructionism—are not, I suggest, among them. And in literature, the stream of consciousness style which began with Knut Hamsun’s novel Hunger has regressed into the obscurantism of postmodernism.

This is due to the view of many, particularly cultural elites, that art must be new if it is to be valid. One need only read the submissions guidelines of any literary journal to see evidence of this. Two things are generally called for. The first is “diverse” voices, a “progressive” idea that treats a person’s inherent characteristics as a relevant criterion for their suitability for publication. The second is work that “experiments with form” or displays “new styles of writing.”

It is notoriously difficult to write a good short story. It strikes me as odd, therefore, that writers are being invited to invent new forms when in most cases they have few proven skills as conventional story tellers. James Joyce demonstrated these skills in Dubliners before charting new terrain with Ulysses. Picasso was an accomplished portrait painter before he experimented with abstract forms. Artists are being hectored to run before they can walk, to produce something new before they’ve produced anything good.

The same trend is evident in politics. Among many, what is new is considered good seemingly by virtue of its novelty, with outcomes that are even more worrying than in the aesthetic domain. We are now at the point where an accusation of sexual assault is as good as a conviction, where punching someone the assailant believes to be a “Nazi” is not just accepted but applauded. We are now at a point where, if a group arbitrarily deems a person racist or misogynist, that person is excluded from debate and often has his or her livelihood threatened.

These are the new frontiers of progressive politics. But are they in fact good ideas? The fashionable answer is “yes.” The honest answer is “no.” What is new in politics is no more necessarily good than what is new in art. Ideas, like aesthetics, pass the test of time precisely because they are good, and for this reason ought not to be jettisoned lightly.

A system which demonstrates this is the common law, one of the finest examples of the positivist method. The common law is the English legal system in which abstract principles are applied to novel facts to produce a just resolution to a dispute. It uses reason to achieve equality and logical coherence, ideals safeguarded through a hierarchical system of review to rectify bias and human error.

It is no coincidence that England has never had a violent revolution of the type seen in almost every comparable nation in the world over the last few centuries. Indeed, modern Britain has been one of the stablest democracies in the history of human civilization. This is in large part because the courts of common law have slowly conferred rights on those subject to its jurisdiction through incremental reasoning, drawing upon a vast fund of accumulated learning.

And, contrary to popular opinion, Britain has, or at least, had a proud human rights record until politicians began to impose themselves in all aspects of civic life following the Second World War. In 1701, Sir John Holt, the Lord Chief Justice of England said: “As soon as a Negro comes into England, he becomes free.” This sentiment would not be repeated in most other societies until more than a century later.

The common law demonstrates the value of looking bravely towards the future while guarding jealously the values that have stood the test of time. It is a shining example of the potential of Comtean positivism to deliver human beings from discrimination and persecution.

So how would the common law answer the questions those committed to the politics of novelty today pose? It says that violence is only justified in self defence. That guilt must be proved beyond reasonable doubt. That the only limit to political speech is that which incites imminent violence. In sober moments, most would agree that these values are preferable to the reactionary calls to deprive people of their rights without the due process of law.

It is true that times change, and that our values require constant reflection and recalibration. But certain features of human nature—our desire to be free, to be equal under the law, to be able to voice our opinions and to determine our own futures—are immutable and universal. If we are keen enough observers of human affairs, and have enough regard for the wisdom of those who went before us, we accept these facts as axiomatic and are unlikely to want to disturb them.

It might be a good moment for us to stand back and place our contemporary problems within a wider historical context of intellectual inquiry. This is not an appeal to revert to old ways of thinking. It is an appeal to intellectual humility, to acknowledging that the questions we now face have been confronted before, and that the answers we came up with then might still be the right ones.

In the aesthetic domain, artists should focus on producing work which is good before attempting to invent new forms. Diversity is great. So is novelty. But these are means to an end, not the end itself. Happily, today we have more art and a larger reservoir of human understanding available to us than anyone who has ever lived. The past is not something to look back on with shame or contempt. Whether it is because we got things wrong or because we got them right, the past is our servant, the key to a richer future and higher states of consciousness.

So let us eschew the politics and aesthetics of novelty and reorient our thinking towards what, over time, has proved to be true and good.

RJ Smith is an Australian writer and academic living in Paris. He teaches law at La Sorbonne and runs a blog called Polite at rjsmithauthor.com. You can follow him on twitter @always_polite