The Australian recently reported that the University of New South Wales (UNSW) is advising its staff to avoid teaching students about the arrival of Australian Indigenous people onto the Australian continent.

As part of the development of materials used to guide teaching, the university has produced a diversity toolkit in regard to culturally diverse students. One of these, entitled Appropriate Terminology, Indigenous Australian People, provides guidelines about how staff should refer to Aboriginal people, their culture and events connected with the arrival of Europeans. For instance, it advises staff not to describe Australia as having been “discovered’ in 1788 (when the first fleet of British ships arrived at Sydney), since this implicitly denies the fact that Australia already was occupied by Aboriginal peoples. Such information already is standard for anyone in Australia who has familiarised themselves with the approved form of navigating discussion of Indigenous issues.

While the vast majority of the advice contained in the document is cultural in its orientation (albeit with a decidedly political flavour at some points), the guidelines occasionally wander into the domain of science. In particular, university staff are explicitly advised to avoid making reference to the fact that “Aboriginal people have lived in Australia for 40,000 years” (a figure that corresponds to the latest widely accepted date of the first arrival of humans to Australia from Africa and Asia). Instead, they are advised to date the Aboriginal presence in Australia to “the beginning of the Dreaming/s,” because such language “reflects the beliefs of many Indigenous Australians that they have always been in Australia, from the beginning of time, and came from the land.”

The document warns that “forty thousand years puts a limit on the occupation of Australia, and thus tends to lend support to migration theories and anthropological assumptions. Many Indigenous Australians see this sort of measurement and quantifying as inappropriate.” Such guidelines—approved by the UNSW Dean of Science—are in direct conflict with the scientific consensus about the origins of Aboriginal Australians.

The accumulated evidence has shown that Aboriginal people arrived on the Australian continent somewhere in the vicinity of 40,000 to 65,000 years ago, with recent evidence leaning toward the earlier part of this range. Given this bounded uncertainty, it makes sense for university staff not to assert a specific date for Aboriginal arrival. However, what is not the subject of debate amongst experts is the claim that the ancestors of Aboriginal people migrated to Australia as part of a larger human migration out of Africa and across the globe. 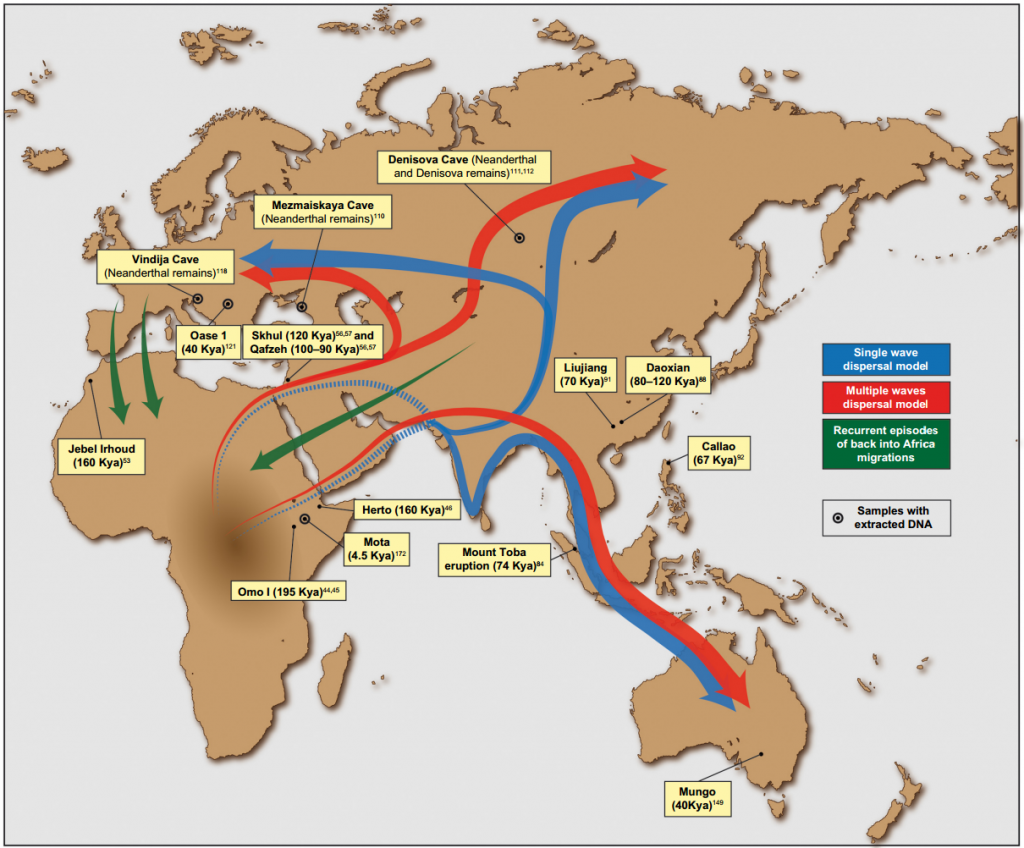 A figure from the 2016 article “Human Dispersal Out of Africa: A Lasting Debate,” by Saioa López, Lucy Van Dorp and Garrett Hellenthal,

The suggestion that Indigenous Australians have been on the continent since the “beginning of time,” and that they “came from the land” is not a scientific statement. The document urges that academic staff refer to such theories as “Teachings from the Dreaming/s” or “Dreaming Stories,” and discourages the use of more accurate terms such as “myths” and “legends.” But the idea of Aboriginals existing since the dawn of time and emerging whole from the Australian land mass is the Indigenous equivalent of traditional creationism, whereby our entire evolutionary history is dismissed in favour of the belief that humans and the natural world were created intentionally by one or more supernatural beings.

Why would a university—let alone the Dean of its prestigious science faculty—instruct staff to avoid articulating a scientifically coherent account of the origins of Australia’s Aboriginal people? It’s hard to imagine a university advising its staff, including its biologists and geologists, to refrain from teaching the scientific evidence for the age of life on earth because it may offend Christian young-earth creationists.

The double standard is a familiar one. Indigenous Australians are widely regarded as a marginalized group. And politically progressive academics have long felt compelled to acknowledge their alternative understandings of the world, lest they be accused of “scientific imperialism” or of dismissing “other ways of knowing.”

This is arguably a well-intentioned exercise. But consider the broader implications of a system of thought that includes these theories of Aboriginal creationism. If the ancestors of modern Australian Aboriginal people didn’t migrate, but instead “came from the land” on the Australian continent, then they cannot be said to share a common ancestry with the rest of the world’s human population. They would literally be of a completely different phylogenetic order, since they would have experienced an entirely separate evolutionary history that did not involve primates.

Is this not the very basis of racism—to believe that a particular group is not really human?

One traditional bulwark against racism has been the recognition that we’re all part of the same human lineage. While populations may differ superficially in regard to certain physical and physiological characteristics, we are all ultimately derived from the same origins, and share the same human potential. It’s ironic that the administrators of a university are encouraging their colleagues to embrace a view that serves to draw a thick line between Aboriginal Australians and the rest of humanity.

To be clear: Individual Indigenous people should not be blamed, or ridiculed, for holding unscientific views about their origins. All cultures and religions have creation myths—and billions of people around the world still believe in them. But universities aren’t religious or spiritual institutions. And the scientific supremacy of evolution over creationism is a battle that was won generations ago. The message in Appropriate Terminology, Indigenous Australian People is that the UNSW now regards its core mission—the pursuit of truth—as negotiable if it conflicts with the postures associated with social justice.

There is something condescending about this exercise, for it effectively endorses the prospect of lying to Indigenous people about what science tells us about their origins. It assumes they’re incapable of dealing with that knowledge.

Yet many Australian Aboriginal people are perfectly comfortable with migration-based accounts of their origins, and don’t feel that it compromises their identity as a people. In fact, a recent statement from the Australian Aboriginal community about their right to a formal voice in parliament identifies the country’s Indigenous peoples as having lived on the land for “according to science, more than 60,000 years.”

If staff at the UNSW were asked to adapt their professional methods to the creationist beliefs of Christian students, they would be justly outraged. And rightly so. The same approach should guide the University of New South Wales when it comes to more marginalized peoples. Religious creationism—be it Indigenous, Christian or otherwise—should have no bearing on what is or isn’t communicated at our universities.

Andrew Glover is a sociologist. Follow him at @theandrewglover.

Andrew Glover is a sociologist based in Melbourne.