Earlier this year, for the first time in history, the government of Britain appointed a minister for loneliness. Although not a medical condition, loneliness is starting to be described in such language, with descriptors such as “epidemic” and “public health crisis” bracketing the term. Large-scale studies have found that around ten percent of adults in Western nations experience chronic loneliness.

In a letter published this year in The Lancet, two neurologists from the University of Chicago asked readers to “imagine a condition that makes a person irritable, depressed, and self-centred, and is associated with a 26% increase in the risk of premature mortality.” They went on to explain that it is not a condition that only affects those with poor social skills, or those who are highly sheltered or introverted. Loneliness is not necessarily about being alone, either—we can feel isolated when surrounded by other people. Somewhat counter-intuitively, social skills training, social support and social contact have all been found to be ineffective as interventions for social disconnection.

Drawing on the work of Durkheim, social psychologist Jonathan Haidt theorises that religious practices are best understood not as the outcome of a set of propositional beliefs (i.e. that “God exists” or “there is an afterlife”) but as the means by which our species creates cohesive moral communities. From a Durkheimian perspective, the individual comes into “moral harmony” with those with whom he shares religious customs. This harmony then provides us with a “perpetual sustenance of our moral nature.”

Our species is unique in that our social structures are highly varied and complex. Sometimes we can see remnants of our primate ancestors in how we organise ourselves: a military platoon might resemble a roaming band of male chimpanzees, or a hippie commune might resemble a bonobo social group, yet although we have many similarities with the other great apes, our ability to live in very large communities, such as cities, is vastly different. No other primate can do so. Our ability to engage in large scale cooperation is a miracle of evolution. The only other species that are capable of such social structures are specialised “eusocial” insects, i.e. bees, ants, and wasps, and even then, most of the insects are related to each other.

So how did we become the only primate that can cooperate, build communities, and ultimately build cities? Where did this capacity come from? Haidt’s hypothesis, drawing on Durkheim, is that it comes from our ability to bind together into social groups which have a shared vision–a shared morality. Imagine early humans dancing around a fire after a successful hunt. Or German pagans sitting beneath a fir tree to celebrate the winter solstice. Circling around a sacred object, early humans formed the bonds of trust that allowed them to trust each other, putting their welfare in the hands of one another, allowing for the development of the specialisation and division of labour that comes later to be known as civilisation.

Long before the birth of Christ, pagans in Europe used trees in their festivals to mark the end of the first half of winter. The winter solstice marked a turning point. After the shortest day of the year had passed, it meant that the days would start to become progressively longer, and winter darkness would soon be replaced by light.

Right up until the 16th century, the first months of winter were a time of famine in northern Europe. Cattle were slaughtered so they didn’t have to be fed, and so fresh meat was available to be eaten. Wine that had been fermenting through the year became available. While the months were tough and cold, the people found ways to get through it: by coming together to feast and drink in the celebration of a rebirth. After the longest night, the sun would be coming up again. And it always did.

Similar to the mid-winter feasting of the German pagans, the ancient Roman festival of Saturnalia involved a sacrifice at the Temple of Saturn, a public banquet and private gift-giving. The Roman poet Catullus described Saturnalia as “the best of days.” 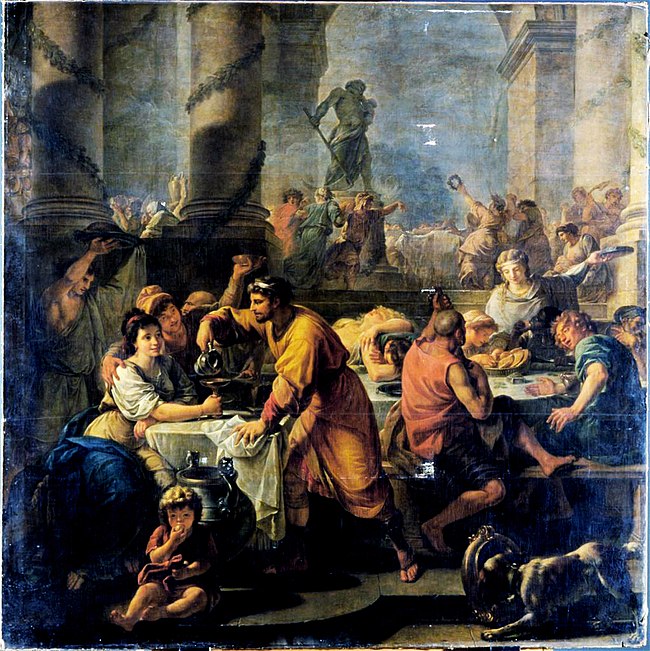 In the secular West, we decorate a tree and we give gifts to each other. We may not be aware of the pagan history of these customs, or how such pagan festivals were incorporated into the celebration of the Birth of Christ—the continuity in custom, however, does not diminish its importance. It shows just how important such customs are, regardless of the beliefs we hold around them.

The power of ritual to bind people together has some evidence behind it. In a psychological experiment, it has been demonstrated that groups of participants who walk, sing, or move their arms in synchrony with each other show increased liking, trust, cooperation, and self-sacrifice than groups performing the similar behaviors but not in synchrony. In his 2010 paper co-authored with Jesse Graham, Haidt tries to answer the mysterious question of why religious people are consistently found to be happier than the non-religious. Their hypothesis aligns with Durkheim’s:

[M]ost of the well-being benefits of religiosity appear to come from participation in a religious congregation. This view is consistent with Durkheim’s (1897/1951) finding of lower suicide rates in more integrated religious communities. If God is a maypole, then the health and happiness benefits of religion come from participating in the maypole dance, not from sitting alone at home thinking about the pole.

We too often equate religion with a set of propositions, with festivals and customs considered supplementary. The view that religion is about propositions generally stipulates that to be religious we must believe in the supernatural and suspend our belief in the laws of nature, evolution or the reality of a cold, indifferent universe. Religion is therefore rejected, often sensibly, on these grounds.

Yet more and more of us are coming to realise that this view is overly simplistic and one-dimensional. And while belief in organised religion, and participation in shared rituals is declining, loneliness is increasing.

When we come together at Christmas in small or large groups to share rituals with each other, and mark a turning point in the season, we celebrate human life and the human ability to cooperate. Without even being consciously aware, we reify the ability to move beyond the other great apes—through the creation of cohesive communities and ultimately civilisations. This year, on Christmas, remember that the religious rituals we partake in do not rely on an abstract belief in miracles—they are miracles themselves—and when we participate in them, what we are really worshiping is not the supernatural, but the miracle of trust itself.

Claire Lehmann is the Editor-in-Chief of Quillette