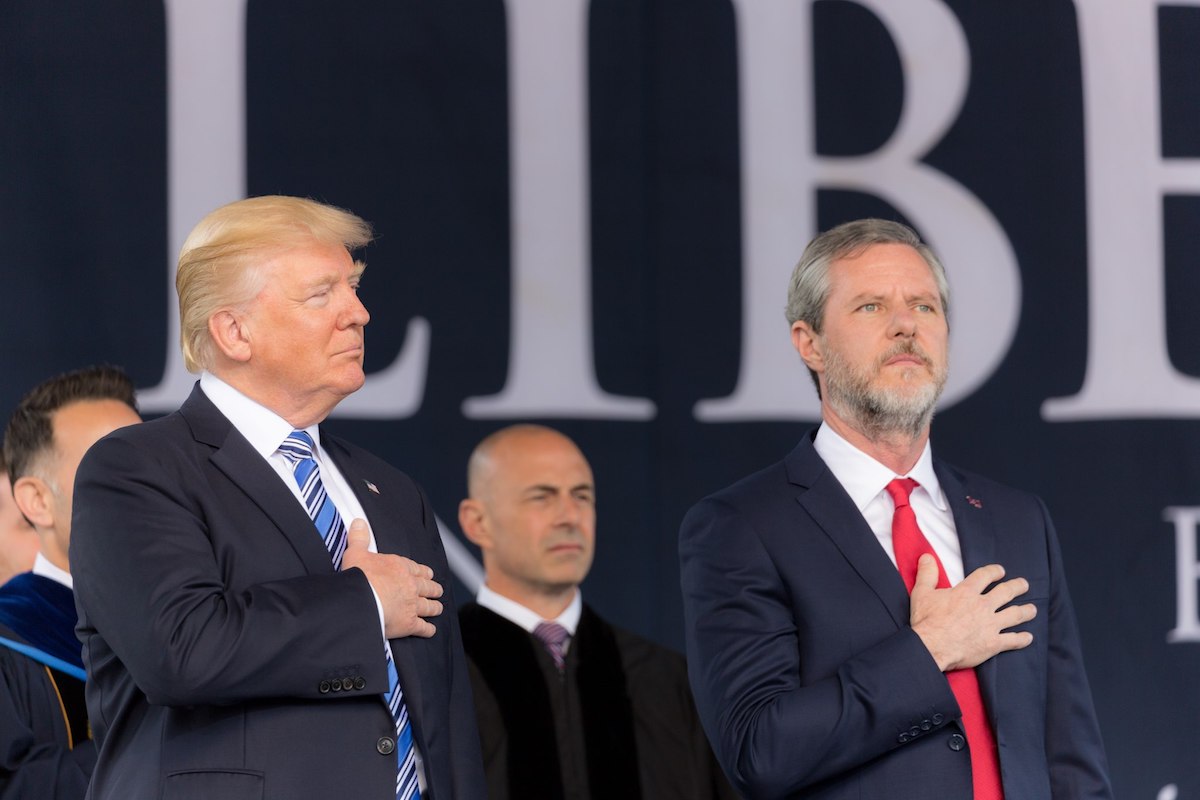 Fifty years ago, in conscientious reaction to the perceived erosion of biblical norms in society, religious conservatives began operationalizing the teachings of Christianity into a vigorous political program. Society’s accelerated liberalization in the 1960s—which featured the sexual revolution, drug experimentation, and enforced racial integration—prompted religious leaders to harness the power of “Judeo-Christian values” to build an electorally formidable monolith.

They succeeded. A ritual in Republican politics now involves presidential hopefuls prostrating themselves before religious conservatives in order to be anointed the next Great Godly Leader by the Christian masses. In other words, to even have a prayer in Republican politics, these candidates need their prayers. Today, though the individual battles are waged on different fronts, the nature of the conflict—the sociocultural clash between Christian political power and its rival frameworks—remains fundamentally the same. The debates over school prayer, stem cells, and evolution, have evolved into debates over religious liberty, transgender rights, and whether or not employees for functionally atheological corporate entities should be compelled to provide customers with a religiously-laden greeting during the winter holidays.

The prominence of these debates is evidence of the Christian Right’s capacity to retain and wield tremendous political power. You don’t propel the “War on Christmas” narrative—a fundamentally unserious pseudo-grievance—into a sustained national news narrative without it. Yet how is the Christian right able to do all this? It does it thanks to three independent but mutually-reinforcing factors, each like a leg on a stool. The platform on which the stool rests, however, is provided by the very way religious conservatism works in the first place.

A precondition for conservative Christian mobilization is the remarkable durability of the religious traditionalist’s mindset. Religious traditions can be impossibly stubborn things—adherents appreciate that they preserve ancient truths and practices, while detractors lament their frustrating unwillingness to modernize. Whether you like this feature or hate it, worldview consolidation is what enables Christian conservatism to remain a predictable movement. Despite the apocalyptic warnings on the Right about the society-dissolving acids of identity politics, conservative Christians are a bloc that votes largely in unison. What makes this possible is that conservative Christianity’s narrow set of values and beliefs get converted into a rigid set of political pursuits and goals.

But since Christian conservatism is built to withstand pressures to adapt, it becomes susceptible to all kinds of grifters and status-seekers. In many ways, belief consolidation sets up the perfect scam: Opportunists seeking fame and wealth can find in Christian conservatism a system that doesn’t require of its leaders continual reinvention—you master a fixed set of values and beliefs and let charisma do the rest.

With that in mind, let’s turn to the three sources of Christian political power.

Some conservative Christian personalities, such as the megachurch pastor, are locally significant; others, such as Pat Robertson and Franklin Graham, are nationally renowned. Every single one of them has a set of believers whose views they greatly influence and impact. This last point is significant. Above I wrote as though conservative Christians build their views independently of their teachers and leaders, as though these charismatic personalities only win the approval of conservative Christians by parroting back to them their antecedently-held beliefs. The dynamic is actually more complicated than that.

The views of ordinary believers are strongly shaped by those whom they see as Christian leaders in their lives. Describing this process more fully, we could say two things: (1) conservative Christians gravitate toward leaders they believe faithfully communicate Christian teaching and effectively model Christian living; and (2) self-interested actors within this space are able to personally gain a lot by taking their own preoccupations and packaging them as spiritual requirements or biblical imperatives.

Within American conservative Christianity, what these leaders do is funnel biblical content, cultural distinctives, and nationalistic tropes into a mix that ordinary believers imbibe as what it means to be authentically Christian. These leaders rely on Christians continuing to see them as enlightened and spiritually empowered. The moment they no longer see them this way, these teachers lose their power and influence—believers will just go to a different church, buy the books of other Christian leaders, or donate to different Christian ministries.

The Christian personalities mentioned above—pastors, authors, entertainers, etc.—help to solidify views and form political orientations, but they do not have an understanding of, or a familiarity with, political mobilization and policy formation. That’s where the politically active conservative Christian organization comes in. A few examples include The Family Research Council, The Heritage Foundation, The Southern Baptist Convention’s Ethics and Religious Liberty Commission (ERLC), The Federalist Society, and more.

These are ready-made channels for directing funding and assistance toward policy outcomes congruent with conservative Christianity. These organizations exist to secure a singular objective: the social and political hegemony of Christian moral teaching. They tend to be not-for-profit entities funded by rich donors and pastor-directed financial support. As a result, they’re kept in line by those in a position to shut them down.

Recently, I wrote about the ERLC for the Washington Post:

In recent years, the ERLC has been no stranger to backlash. Russell Moore, who is president of the commission, has faced calls for his dismissal over the Trump-critical stance that he took during the 2016 election. Some members of the conservative evangelical Southern Baptist Convention, the nation’s largest Protestant denomination, have seen in the ERLC’s actions a leftward drift toward “social justice.”

To cite an example of this power dynamic in action: Texas’ Prestonwood Baptist Church reportedly sought to withhold its recurring donation of $1 million unless Moore was ousted.

On many occasions, these organizations do great work. And they are critical for Christianity’s ongoing success in the public square.

Increasingly, this is the most decisive source of Christian political power. Right-wing media has found it astonishingly lucrative to package a set of political priorities as the only acceptable form of social conservatism. This is incentivized by the way the media market operates: there are entities and personalities whose hugely profitable positions in the Christian subculture entirely depend on how well they can embed the views of ordinary believers into their political narratives. Just as it is with Christian personalities, right-wing media entities don’t merely reflect the views of Christians back to them through their newscasts and coverage—these media entities actively shape the views of Christians to a significant degree as well.

In a superb piece for the New York Times, Amy Sullivan details the contours of our new “Fox Evangelicalism.”

[T]he nationalistic, race-baiting, fear-mongering form of politics enthusiastically practiced by Mr. Trump and Roy Moore in Alabama is central to a new strain of American evangelicalism. This emerging religious worldview—let’s call it “Fox evangelicalism”—is preached from the pulpits of conservative media outlets like Fox News. It imbues secular practices like shopping for gifts with religious significance and declares sacred something as worldly and profane as gun culture.

Day in and day out, right-wing media grinds out culturally revanchist appeals to the crassest forms of conservative and reactionary thinking. August marked the 200th consecutive month of Fox News’s ratings hegemony over its cable-news rivals. Though the conservative media landscape is broader than just one network, it’s interesting to note that in a recent Pew poll, 88 percent of “consistent conservatives” registered real trust in the coverage offered by Fox News. Right-wing media—Fox included—has exercised significant influence over committed conservatives based on the proposition that mainstream outlets are incorrigibly liberal. This is largely a fiction. But it is brilliant from a marketing perspective: News and commentary from the Right assumes a lofty importance when it can style itself in the credulous conservative mind as society’s last great line of defense against liberalism. Together, these mutually-reinforcing factors have produced an American colossus.

So the Christian Right, one of society’s most formidable voting blocs, is shaped to a significant degree by charismatic Christian personalities, politically-active conservative organizations, and right-wing media. It’s no wonder, then, that this group often makes theologically counterintuitive political decisions. On a simplistic theory of Christian political behavior—one that many Christians believe about themselves—faith-based conservatives simply vote for candidates who support their worldview.

Yet, in 2016, four out of five white evangelicals voted for a man whose life is a middle finger wagging in God’s eye—an uninterrupted desecration of Christ’s Sermon on the Mount. Roy Moore, who possesses the extraordinary distinction of being even more detestable than Trump, also managed to win the backing of a sizable portion of the movement. It got so bad that at one point, I felt the need to pose a semi-satirical question at my publication in the form of a thought-experiment: Would Evangelicals Elect Lucifer?

The best explanation is that a political agenda need not look anything like the true essence of a group’s core identity. There is no presumption that the three sources I’ve listed convey to ordinary Christians a set of genuinely Christian political ideals; in fact, what we are seeing is conservative Christians absorbing political values that are scandalously contrary to biblical Christianity. In other words, there is no correlation between thinking one is choosing the candidate God would want and actually choosing the candidate God would want.

The particular causes Christians see as spiritually significant may be altogether foreign to the sort of emphases we find in the Bible. For example, it’s hard to see how a boycott of Nike over the company’s arrangement with Colin Kaepernick squares with God’s commands, or, to bring up an example from the subculture’s not-so-distant past, how exactly those cringeworthy, nausea-inducing Christian-themed graphic tees are supposed to represent a spiritually superior alternative to t-shirts of a more “secular” kind. These are exogenous campaigns, pushed by influence-peddlers and status-seekers and business interests. It isn’t cynical to expect that a movement so large would be penetrated by grifters, charlatans, and megalomaniacs (MAGAlomaniacs, too). These are the opportunists who have found a way to leverage aggregate Christian power into individual influence.

There is a reason Trump sought the Christian vote so tirelessly. The interplay of powerful institutions  within Christian conservatism—churches, parachurch organizations, Christian personalities and leaders, the avatars of the consumer Christian subculture, right-wing media entities —together represent a massively influential political machine that Trump can pander to, and thus rely upon, in order to preserve power for himself. It’s a mutually negotiated power loop: they support Trump and he elevates their individual interests. This is ordinary politics, of course, but what makes this arrangement remarkable is that he is, on paper, everything they should despise and campaign against. And they are, to him, idiotic worshipers whose desires for holy living are incompatible with the Trumpian way.

Yet, curiously, despite this mismatch on paper, we get a happy marriage. I give you some of the most prominent conservative Christian leaders of today:

Ultimately, this is not an article about Trump; I bring him into the picture as a way to show how the magnetic pull of the presidency is what leads to theological and ecclesiastical capture. The perpetuation of Christian political power requires sycophancy—in return, these eminent leaders and organizations get access and status. This quid pro quo is not hard to spell out in more detail: the president grants evangelical advisors influence, prestige, importance, and what he gets in return is the renewable imprimatur of Christian legitimacy, with sermons, statements, and TV and radio appearances, bearing down on ordinary Christians until there is no escape from the complete identification of one’s faith with voting for a particular candidate. Conservative believers are bombarded with a message that conflates support for Republicans with what it means to possess a vibrant Christian faith, with the latter only being actualizable by faithfully and energetically embracing the former.

This is power. And, as an evangelical myself, I do not think we should have it.

Berny Belvedere is a professor of philosophy and editor-in-chief of Arc Digital. His work has appeared in The Washington Post, BuzzFeed News, National Review, Weekly Standard, and other places. You can follow him on Twitter @bernybelvedere