Mathematician James A. Lindsay, British writer Helen Pluckrose, and Portland State philosophy professor Peter Boghossian have become an overnight sensation. They’ve earned recognition from academics all around the world including high-profile figures like Jordan Peterson and Steven Pinker. But their detractors have also stepped out in full force. Lindsay, Pluckrose, and Boghossian have agreed to an exclusive interview with Quillette to address the issues raised by their critics.

For the record, I know the three writers but had no prior knowledge of their year-long project before the story broke. The following text has been transcribed from an in-person interview. It has been edited for readability and flow.

Andy Ngo: First of all, what are “grievance studies” and how did you identify which disciplines belong in this field?

Helen Pluckrose: What we’re looking at specifically is a particular epistemology that originally came from postmodernism in the late 60s and then underwent an evolution in the late 80s and 90s. It formed the disciplines we have now: critical race theory, intersectionality, postcolonial studies, and queer theory. These are subdisciplines within the field of identity studies that we’re calling “grievance studies.”

How did you come up with the term?

James Lindsay: I started using it on Twitter a year or two ago when trying to describe [this field of research]. If you just say “gender studies,” you leave out critical race theory, queer theory, postcolonial studies, etc. There was no succinct way to name these things en masse. At some point I started calling it “grievance studies” and we decided it was the appropriate name to uphold for this project.

Pluckrose: I used to call it “identity studies” because identity was the common feature. But you could certainly study identity rigorously and consistently. So, “grievance studies” gave it that clarity that we’re starting with the assumption of a power imbalance.

Lindsay: Which they call “critical constructivism” if you want the fancy academic term.

Moving on to the criticisms you’ve received since coming clean; in retrospect, do you think your project was unethical and a serious violation of academic norms?

Lindsay: It probably is something of a violation of academic norms. If we’re going to do a credibility audit of the field then what we did was necessary. For example, using pseudonyms doesn’t present any automatic ethical quandary. However, when major journalistic publications like the Wall Street Journal got involved, they contacted the [academic] journals who in turn started demanding that we prove our identity. That’s where the deception of a pseudonym could have become forgery [if we continued]. That would have crossed a line. When we set out on this project we had a few guiding principles. One of those was that we were going to come clean with whatever happens—positive or negative.

I do understand that academic research depends upon trust. But, the peer review system is designed to be able to weed out broken scholarship. Even though we took advantage of that trust, the papers we put forth should have been able to have been detected by a rigorous field as being bogus. Whether it was the data being ludicrous, or our arguments being completely specious, or our methodology being nonsensical—all of these problems should have been things that peer reviewers picked up on.

Pluckrose: We couldn’t inform journals that we were intending to test whether they’ll publish rubbish because then obviously they won’t. There was a need for a certain amount of deception. There wasn’t any other way to do this.

And what do you think would be different if you got to see your project go to completion?

Peter Boghossian: We had other papers that were scheduled to go out in January or February. We had more papers awaiting peer review. People can go to the Google Drive and decide for themselves how many of these papers would have gotten in.

The three of you have continually stated your leftist political identity in your writing and on your social media accounts. How is your political affiliation relevant to the project?

Pluckrose: It’s not a secret that we want to fix the left so that it will win and avoid right-wing problems like Trump.

Lindsay: It’s also in no way surprising that people would say we’re tools of the right. It makes sense to clearly articulate [our views]. We’re of the left. [Grievance ideologues] don’t speak for us and we don’t think they speak for the left either. These people are lunatics.

Pluckrose: This is the natural response if you feel that your own group is doing something wrong. The answer is to address it from within.

So then is your goal to improve academe or is it to further a political agenda?

Pluckrose: Liberal science needs to have a respect for truth and a solid epistemology based on evidence. It’s not doing social justice causes any favor to be shoddy and inconsistent. Our main objective isn’t to forward a political agenda. It’s to make scholarship more rigorous. We accept that sometimes that may produce results which we’d rather wish to not be true.

Are you uncomfortable that many of your vocal supporters right now are on the political right?

Pluckrose: Speaking for myself, I don’t have a problem with them being on the right. I’d try and persuade them to not be but the important thing is being liberal and rational.

Lindsay: To me, it’s important that I’m liberal. That means I don’t mind that people are who they are. People should be able to think for themselves and do as they will. I can’t control who supports me and I wouldn’t want to. Let them support me for the reasons they think are most valuable.

Critics have tried to delegitimize your work by saying your articles were only published in “obscure” or fringe journals. To that, you say what?

Lindsay: Yes, the Journal of Poetry Therapy is by no means big. But qualifying how big or small a journal is is difficult because they’re in disciplines that are subdivided in sub-disciplines, etc. Nobody can deny that Sex Roles and Hypatia are serious journals. Gender, Place & Culture: A Journal of Feminist Geography is the leading feminist geography journal. So if I want to criticize feminist geography, I better go to their top journal. Fat Studies is of course a niche, boutique journal. Fat studies as a discipline is boutique, so it’s going to be a small journal. 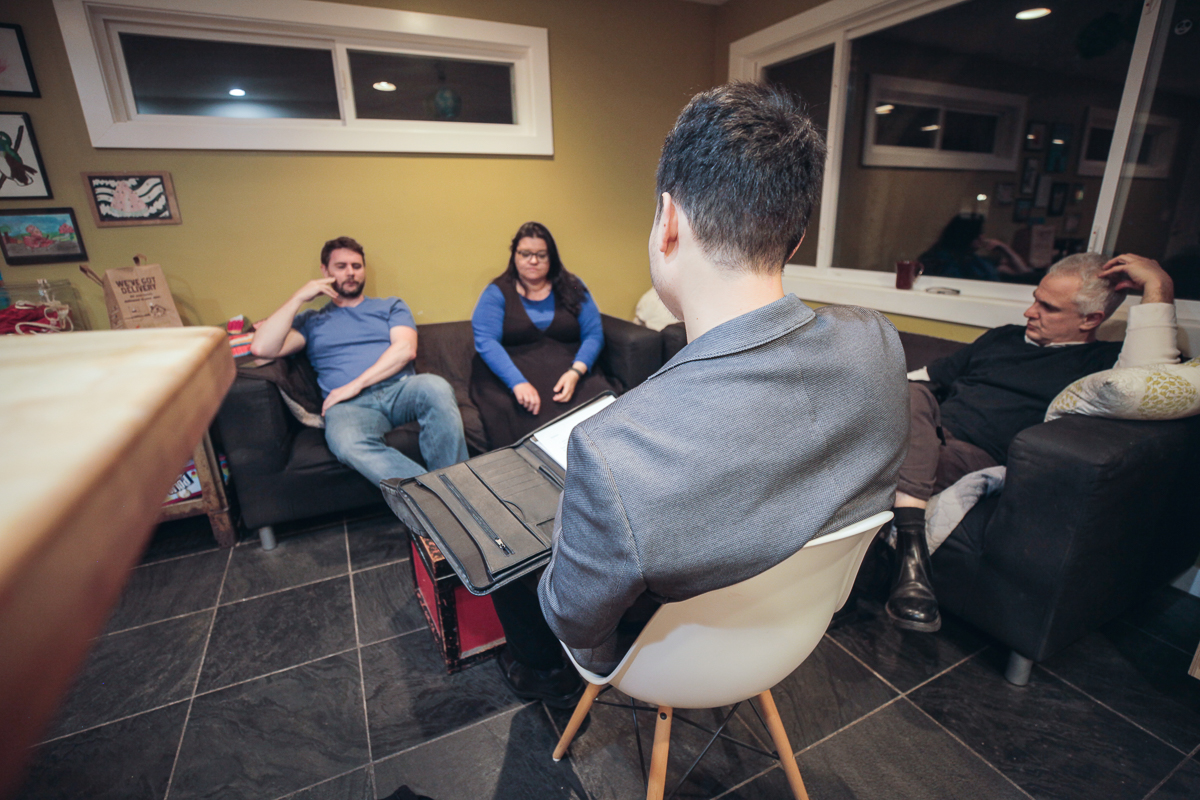 Does your experiment suffer from the lack of a control group?

Lindsay: What on earth would a control group be for if our test is to test “grievance studies” and not all of academic scholarship? The fact that some of our papers were rejected and we could see why they were rejected gives you the kind of data that serves in place of a control.

We’re not doing a comparative study. We’re trying to do an investigation. Somebody asked me why I didn’t do this to math. Why the hell would I do it to math? Yes, people make mistakes and stuff gets by, but I don’t see systematic error going on there.

Ms. Pluckrose, given that you came into this project after Dr. Lindsay and Dr. Boghossian had already written a hoax paper together last year, do you wonder if your addition was for the optics of having a woman on board?

Pluckrose: (Laughs.) I don’t wonder that, no. I’m fairly sure that what they wanted was my approach to theory.

Boghossian: We could not have done this without Helen. We are a team and everybody had a unique contribution. And Helen having certain anatomy had absolutely nothing to do with the choice [to include her].

What’s this documentary you’re working on and teasing in short segments on YouTube?

Lindsay: We committed to transparency from the beginning so we invited a documentary filmmaker, Mike Nayna, to work with us. We wanted him to document the process whether we succeeded or failed. If we made complete fools of ourselves, that would have been committed to the film so that we couldn’t have any possible way out. Of course, the story has also grown over time so it’s going to be a documentary about how this project came together and what the fallout was.

Pluckrose: We still don’t know precisely what the documentary is going to be because the story isn’t over yet.

Well, in the spirit of transparency, I have to ask: Who is funding this project?

Lindsay: This project was funded in the sense that I was funded. I have a handful of anonymous donors that span the political spectrum. And if anybody needs to know, more money came from the left than the right. The relevant question is, “Did the money influence the work?” And the answer to that is no. The funders had no creative control. They gave no direction. We were left totally to our own devices.

And what did the donors want in return for their contributions?

Lindsay: Nothing. They wanted the work to be done—if it could be done. They made this possible given the number of hours it took to do it.

With #MeToo dominating headlines again because of accusations against Judge Brett Kavanaugh, do you think the timing for your story is insensitive given that your project seeks to undermine some feminist disciplines?

Boghossian: We didn’t choose the timing.

Pluckrose: I don’t think that any time would have been better or worse. It’s not as though we are getting a break from scandalous news stories. It is always an appropriate time to look at things rationally and with evidence.

Dr. Boghossian, as the only one of the three currently working in academe, what consequences, if any, are you anticipating for your career?

Boghossian: I don’t know. Ask me again in two months?