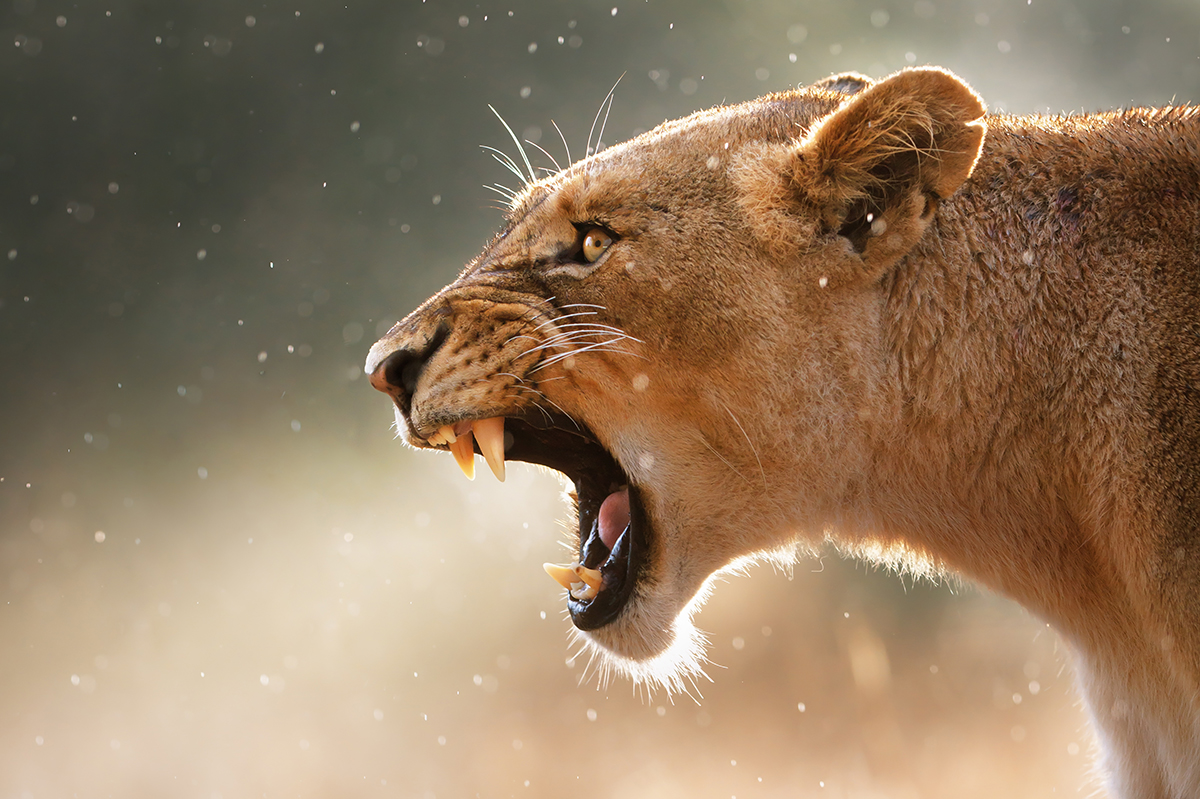 Male lions can be monsters, murderous and focused. Toxic, if you will.

Given the opportunity, male lions will kill the kittens in a pride over which they have gained control. They commit infanticide, which brings the new mothers, freshly childless, back into estrous. The females are quickly impregnated. This, we can all agree, is disturbing behavior, and may make some people feel rather less pleased with lions.

Given the opportunity, the vast majority of modern human males would do no such thing.

Those who argue that men are inherently toxic are, ironically, making arguments that are biologically essentialist. And they are making them badly, at that. Evolution built humans, as it did lions. But humans have longer childhoods and greater generational overlap, share more ideas with greater complexity, and usually live in more stable social groups than do lions. In humans, evolution has given us the capacity to shape personality during development to a greater degree than in any other species. As such, and because few human cultures would tolerate such behavior, the vast majority of men would not and could not kill babies, nor rape their grieving mothers.

Over 30 years ago, I came of age as a female in LA. Being a young woman in LA means being watched—watched for deviations from the norm, for indications of future fame, for signs of weakness. Watched simply for how one looks. There are, unfortunately, many examples, recent and not, that point to LA’s most famous industry being a place where young women need to be on guard. I never aspired to the industry, but even just living in LA, the culture is omnipresent.

Two anecdotes should suffice. Walking alone in my sun-kissed west LA neighborhood one summer, I was approached by a man looking for extras for a beach scene in a movie. Before I had said a word, he told me where to go, how much I would be paid per day, and what would be expected of me: that I stand around in a bikini, among others similarly clad. I told him I was going to college. He literally looked me up and down, adopted a frown, and assured me that I did not need to go to college. Beach scenes were my future, and from there—who can say? Better beach scenes, presumably.

Second anecdote: One of my many part-time jobs in high school, along with scooping ice cream and renting out VHS tapes, was staffing high end catering events. Dressed in classic, tailored black and white, I carried platters of hors d’ouevres around during cocktail hour, and ferried plated entrees during table service. At indoor events, male attendees would often stop me to engage in small talk, and ask for my number. I wished that they wouldn’t, but I felt no risk. One night, though, I worked an event on the backlot of Universal Studios. A group unaffiliated with Hollywood had booked it for a no-expenses-spared fete, and I was to do the usual, except that I would have to cover more ground. The kitchen was further away, the guests more spread out, with no walls to contain them. Before table service, my co-workers and I made the rounds with our platters of bruschetta and cured meats. On this Hollywood backlot, though, the lack of walls proved dangerous. A young man—older than me but younger than 30—maneuvered me away from the crowd. There were many shadows, and he stood too close. He looked at me with predatory eyes. He backed me into a hedge, rubbed up against me. And I got away from him before it went any further.

That was toxic masculinity, before the phrase existed.

Yes, toxic masculinity exists. But the use of the term has been weaponized. It is being hurled without care at every man. When it emerged, its use seemed merely imprecise—in most groups of people, there’s some guy waiting for an opportunity to fondle a woman’s ass without her consent, put his hand where he shouldn’t, right? That’s who was being outed as toxic. Those men—and far, far worse—do exist. Obviously. But wait—does every human assemblage contain such men? It does not. This term, toxic masculinity, is being wielded indiscriminately, and with force. We are not talking imprecision now, we are talking thoroughgoing inaccuracy.

Most men are not toxic. Their maleness does not make them toxic, any more than one’s ‘whiteness’ makes one racist. Assume for the moment that we could agree on terms: Is maleness more highly correlated with toxic masculinity than is femaleness? Yes. Ipso facto—the term is about maleness, so men will display more of it than will women. The logical leap is then concluding that all men are toxic. The very communities where ‘toxic masculinity’ is being discussed most are the communities where the men are, in my experience, compassionate, egalitarian, and not at all toxic.

Calling good men toxic does everyone a deep disservice. Everyone except those who seek empowerment through victim narratives.

For the record: I am not suggesting that actual victims do not exist, nor that they do not deserve full emotional, physical, legal, medical, and other support. I also do not want to minimize the fact that most women, perhaps even all, have experienced unpleasantness from a subset of men. But not all women are victims. And even among those women who have truly suffered at the hands of men, many—most, I would hazard to guess—do not want their status in the world to be ‘victim.’

All of which leads us directly to a topic not much discussed: toxic femininity.

Sex and gender roles have been formed over hundreds of thousands of years in human evolution, indeed, over hundreds of millions of years in our animal lineage. Aspects of those roles are in rapid flux, but ancient truths still exist. Historical appetites and desires persist. Straight men will look at beautiful women, especially if those women are a) young and hot and b) actively displaying. Display invites attention.

Hotness-amplifying femininity puts on a full display, advertising fertility and urgent sexuality. It invites male attention by, for instance, revealing flesh, or by painting on signals of sexual receptivity. This, I would argue, is inviting trouble. No, I did not just say that she was asking for it. I did, however, just say that she was displaying herself, and of course she was going to get looked at.

The amplification of hotness is not, in and of itself, toxic, although personally, I don’t respect it, and never have. Hotness fades, wisdom grows— wise young women will invest accordingly. Femininity becomes toxic when it cries foul, chastising men for responding to a provocative display.

Where we set our boundaries is a question about which reasonable people might disagree, but two bright-lines are widely agreed upon: Every woman has the right not to be touched if she does not wish to be; and coercive quid pro quo, in which sexual favors are demanded for the possibility of career advancement, is unacceptable. But when women doll themselves up in clothes that highlight sexually-selected anatomy, and put on make-up that hints at impending orgasm, it is toxic—yes, toxic—to demand that men do not look, do not approach, do not query.

Young women have vast sexual power. Everyone who is being honest with themselves knows this: Women in their sexual prime who are anywhere near the beauty-norms for their culture have a kind of power that nobody else has. They are also all but certain to lack the wisdom to manage it. Toxic femininity is an abuse of that power, in which hotness is maximized, and victim status is then claimed when straight men don’t treat them as peers.

I had a student on one of my study abroad trips who had a perennial problem with clothing. She was never wearing enough of it. She was smart, athletic, and beautiful, but also intent on advertising hotness at all moments. At a field station in a jungle in Latin America, she approached me to complain that the local men were looking at her. The rest of us were wearing field gear—a distinctly unrevealing and unsexy garb. She was in a swimsuit. “Put on more clothes,” I told her. She was aghast. She wanted me to change the men, to talk to them about where to point their eyes. Here in their home, where we were visitors, and one of the gringos had shown up nearly naked, she wanted the men to change.

For a spell before that, my job was to trek around tropical forests studying poison frogs. I was interested in their sex lives, in figuring out how they choose their mates and their territories, in how they parent, and in what that meant about the evolution of sociality more generally.

My research revealed, in part, how many different ways there are to be territorial, and to be successful, in male frogs. In Madagascan poison frogs, there are multiple routes to success, both naturally and sexually selected—males can succeed, evolutionarily, by holding high-quality territories, and they can also succeed by having no territories at all (but by being rather more sneaky). Wide variance in strategy, and shifting strategies under different conditions, is well studied in animal behavior and game theory.

Given that we know this to be true in non-human animals, why would we imagine that humans are less, rather than even more, flexible? There are many ways to be female, and many ways to be male, and some of each are bad news for everyone but the individual employing them. As a social species that has become the dominant ecological force on our planet, we can and should aspire to behave in ways that are not merely selfish, not merely competitive, but also collaborative. Toxic masculinity, and toxic femininity, are inherently selfish modes, and those not employing them should be interested in seeing them eradicated.

The movement that has popularized the term ‘toxic masculinity’ shares tools and conclusions with those who see signs of ‘white supremacy’ everywhere they look. Intersectionalists have in common with one another a particular rhetorical trick: Any claim made by a member of an historically oppressed group is unquestionably true. Questioning claims is, itself, an act of oppression.

This opens the door for anyone who is willing to lie to obtain power. If you cannot question claims, any claim can be made.

Thus: Racism is ubiquitous. And all men are toxic. I object—but objection is not allowed. Everyone who understands game theory knows how this game ends: Innocent people being vilified with false claims, and exposed to witch hunts. Sexual assault is real, but that does not mean that all claims of sexual assault are honest.

It is shocking that this bears saying, but there is a world of men who are smart and compassionate and eager to have vibrant, surprising conversations with other people, both men and women. The sex-specific toxicity that I have seen, when it has been obvious, has mostly been in the other court. All men are toxic and all women victims? No. Not in my name.

Heather E. Heying is a former professor of evolutionary biology at The Evergreen State College. She has a PhD in Biology from the University of Michigan, and is the author of Antipode, an investigation of life and research in Madagascar. You can follow her on Twitter @HeatherEHeying