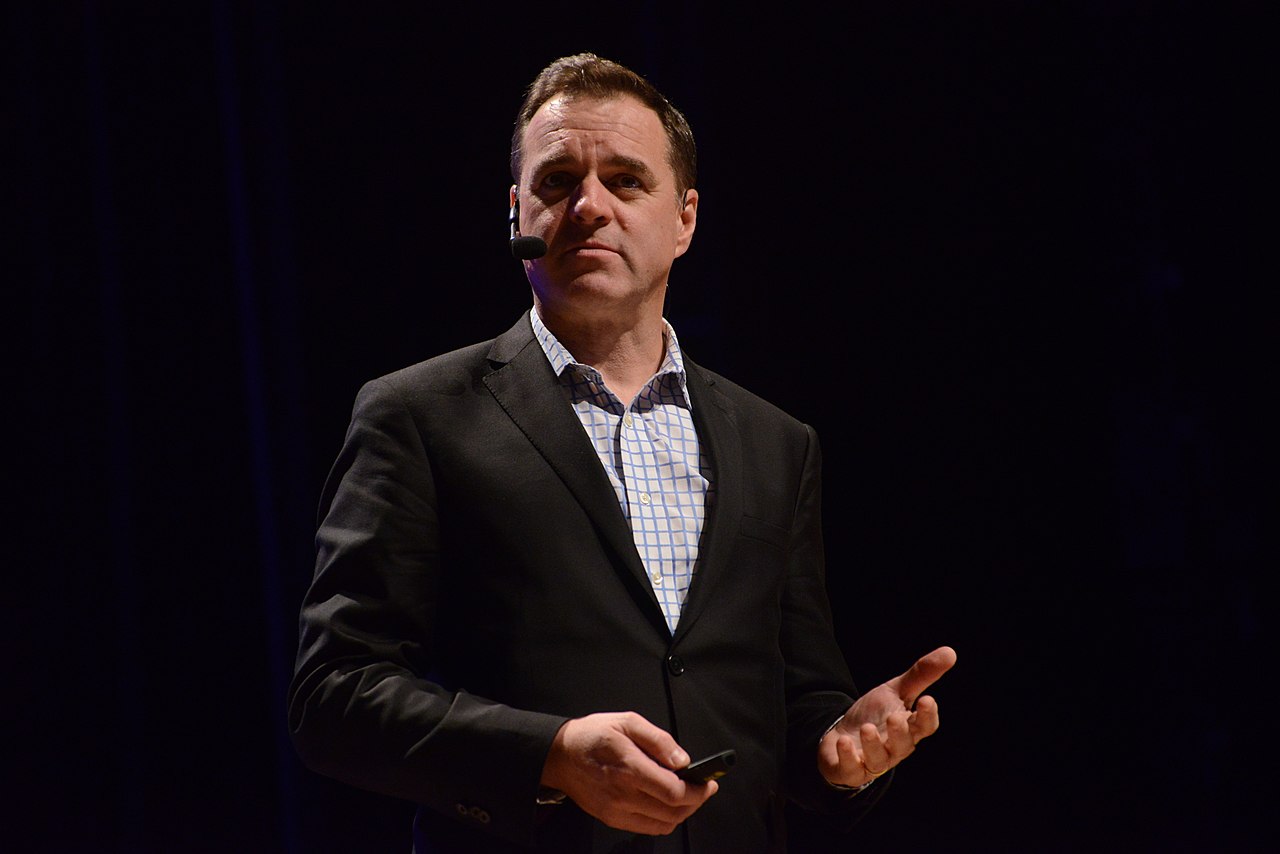 Niall Ferguson is a compelling writer, wry and puckish, intellectually curious. He has a knack for converting his deep knowledge of history and finance into narratives the average reader can grasp. There’s a generosity and a sense of excitement to his writing that have helped propel him to stardom in the publishing world and on the small screen. But for all his qualities, Ferguson didn’t know enough to pause before hitting ‘Send.’ Instead, by gleefully attempting to crush a coterie of left-wing Stanford University students who were trying to gain influence within his invited speakers series Cardinal Conversations, he threw gasoline on the blazing free speech wars and turned his own, noble-sounding words into ash. Ferguson has vowed to retreat “to [his] beloved study,” where presumably he will hunker down, reassess his methods and motives, and even, one hopes, re-emerge a better man.

One of our era’s most recognizable defenders of free speech, Ferguson co-founded Cardinal Conversations to foster open debate at Stanford. When it was announced that Charles Murray, author of the infamous 1994 monograph, The Bell Curve, would be speaking last February, several Stanford University campus groups began protesting a free speech initiative that seemed designed to stir up controversy and privilege right-wing voices. Ferguson became “deeply concerned” following an anti-racist rally on campus, and in a spectacularly ironic twist, began plotting with his young acolytes on the steering committee against a progressive student activist named Michael Ocon. Ferguson feared that Ocon would attempt to derail Cardinal Conversations, so he set about ensuring that the student’s views wouldn’t be heard. He advised the young Republicans that they “should all be allies against O[con]. Whatever your past differences, bury them. Unite against the SJWs.” He also recommended they do some ‘opposition research’ on Ocon in the hope of digging up dirt that could be used to discredit him.

It was a self-inflicted wound, foolish and silly and shameful, and his departure is a loss for historical scholarship. On some level, even his detractors must rue his slinking departure; debating his ideas was always challenging, stimulating, and fun. Ferguson has never shied away from the spotlight, no matter how glaring, and is known for taking melodramatic umbrage at criticism. Nevertheless, the knives have come out for him, sharper than ever, with outlets like Vox crowing that the Ferguson fracas is emblematic of the Right’s bad faith argument in favour of free speech.

How and why did this renowned author and academic allow himself to become entangled in the maelstrom of campus politics? What could possibly have driven him to conspire with 20-year-old students against their left-leaning foes and write incautious sentences like these: “Now we turn to the more subtle game of grinding them down on the committee. The price of liberty is eternal vigilance”? Niall Ferguson has long been sounding the alarm about the moribund nature of free speech on campus and in the media, and he believes that it is the Left who, given half a chance, will deliver the coup de grâce. He is hardly alone in worrying about the Left’s puritanical speech policing. Jordan Peterson is perhaps the most famous public worrier about left-wing anti-free-speech activism, but all the members of the so-called ‘Intellectual Dark Web’—including the more progressive ones like Bret Weinstein—have argued that the Left is more censorious than the Right, at least in the current context. Evidence that progressives are clamping down on free speech is clearest on North American university campuses, where university speech codes elaborated by progressive administrators spell out the limits of what students and faculty can say. Certainly, the prevailing view on the Right is that universities are hotbeds of ideological conformity.

There is no denying that Social Science and Humanities faculties contain far more progressives than they do conservatives; indeed, the data supporting this are overwhelming. While many professors in these disciplines are perfectly professional and haven’t thrown the baby out with the bathwater, the fact remains that these departments, while highly conscious of the importance of cultural diversity, are far less concerned with viewpoint diversity. This monolithic convergence of orthodox beliefs leads to a less congenial environment in which questioning received wisdom can be perceived as an assault. Deviation from ideology is strictly monitored on social media, where call-out culture can do most of the dirty work of shaming dissenters and detractors.

But monotonous left-wing virtue-signalling is not the whole story. The Right has its own techniques and apparatus designed to rally adherents to the cause of free markets and smaller government. Indeed, in the United States the right wing’s cavalry has already galloped ahead with all three branches of government. Right-wing individuals and organizations finance major universities and think tanks to the tune of billions of dollars. Turning Point USA regularly visits American campuses to stir up outrage against progressives and trumpet the imminent decline of Western civilization. As the Vox article points out, right-leaning campus groups are not above inviting controversial characters like Milo Yiannopoulos and Steve Bannon in the guise of promoting free speech when what they really want to do is cause outrage on the part of their idealistic fellow students on the other side. This kind of trolling taints genuine efforts to stimulate dialogue, leading to massively disproportionate protests against comparatively mild-mannered speakers. Indeed, in a shockingly pusillanimous move in 2014, Brandeis University caved to pressure from Muslim groups and progressive activists and rescinded its offer of an honorary PhD to Ferguson’s wife, Ayaan Hirsi Ali. Hirsi Ali is an author and promoter of women’s rights who was born in Somalia and endured all the humiliation and oppression that the Islamic world can deploy against Muslim women, including female genital mutilation, forced marriage, and Islamist indoctrination.

Ferguson is an unapologetically revisionist academic who has long enraged his more progressive colleagues by making arguments that dispute some of the Left’s most sacred shibboleths. In his 2003 book Empire: How Britain Made the Modern World, he argued that Britain’s embrace of capitalism, which led it to explore and eventually rule vast swathes of Africa, Asia, and North America, also contributed the foundations of modern democracy and the rule of law. 2011’s Civilization: The West and the Rest makes the case that Europe and America came to dominate the world thanks to six “killer apps” (competition, science, property, modern medicine, consumerism, and the work ethic), and that we in the West would do well to study how we got here, and what we need to understand in order to stay ahead. His unapologetic defense of capitalism and other ‘Western’ values has often grated on the sensibilities of left-leaning historians.

And left-leaning historians, Niall Ferguson has often argued, dominate the field so thoroughly that students are rarely presented with the kinds of ideas he writes about—ideas he considers crucial to the preservation of our modern, democratic societies. In his view, the contemporary, politically correct, post-colonial narrative which holds that Empire and Imperialism were unalloyed evils that served only to advance the interests of oppressive powers and crush the aspirations and natural evolution of victimized nations and peoples, is hopelessly simplistic at best, and perniciously ahistorical at worst. For all the violence, racism, and rapacity inflicted around the world by European colonial powers (and which he readily concedes), Ferguson believes that the West should be credited for the ideals of fair play, the rule of law, free trade, and democracy.

Despite being well-versed in the world’s great cultures, Ferguson has more than once been accused of bigotry—a charge he hotly denies. There is certainly a long and not always noble tradition in America and Britain of fretting about the decline of Western values, much of it a reaction to the necessary and liberating political and intellectual work of colonial subjects, blacks, and women articulating ways and reasons to throw off the shackles of oppression. Ferguson is aware of this history of maligning other cultures and peoples in order to preserve the dominance of Western power, but his focus is on the positive contributions brought about, especially, by the capitalist system and its necessary corollary, the rule of law. Still, Ferguson’s affection for counterfactuals—for example, imagining how things would have turned out if Britain had stayed out of WWI, or if India had never been colonized by Britain but instead had continued to be ruled by the Mughals—lead him to advocate for positions that are anathema to the Left.

When he was a student at Oxford, the academic world had already begun its great shift leftward. Yet, as he explained to Dave Rubin in the course of a recent interview, it was still possible to debate the ideas that would one day become academic orthodoxy. As a student, he relished the opportunity to take on the consensus, and indeed was “egged on” by the few conservative professors who remained. Turned off by the sanctimonious groupthink of most of his fellow students and bewildered by their wholesale dismissal of what he perceived as the good that British culture and politics had contributed to world history, Ferguson strode onto the public intellectual stage swinging, and hasn’t stopped since.

Perhaps he never quite shook his adolescent pugnacity. Perhaps, despite his worldly success, Niall Ferguson is a Peter Pan, a boy who never grew up. He has since sheepishly conceded that “student politics is best left to students.” The Vox article argues thinly that “his track record of controversial statements—such as attacking the work of liberal economic giant John Maynard Keynes on grounds that Keynes was gay—suggests that’s only part of the story.” In other words, if a historian suggests that a certain economist’s outlook on the future might have been influenced by his sexuality, then his claim that the Left dominates campus debates must be spurious. This is nonsense; one can obviously believe that free speech is in peril and advance theories, however crackpot, about human sexuality and its psychological implications. Unfortunately, by making the bizarre decision to aid and abet his youthful disciples at Stanford as they ganged up on another student, he crossed an abundantly clear ethical line, using his position of power and authority to undermine one of his own charges. Worse still, he shot friendly fire at his own side and undermined a legitimate debate about free speech. He claims that, while he regretted having written the emails, “It seemed to me that the Cardinal Conversations student steering committee was in danger of being taken over by elements that were fundamentally hostile to free speech.” This is something of an explanation, but far from an excuse.

The Stanford email scandal will no doubt chasten Niall Ferguson, and there’s little doubt that he will give student politics a wide berth in the future. In a supposed attempt to foster free speech and open debate via the Cardinal Conversations initiative, Ferguson went to great lengths to crush his opponents’ rights to express dissenting views. But Niall Ferguson’s foolhardy actions, far from indicating the mendacity of the Right’s free speech argument, may in fact demonstrate just how beleaguered even a successful conservative historian can feel in an academic environment almost wholly dominated by progressives.

In a former life, Genevieve Weynerowski co-founded a personal carbon trading company. She now works as a writer and translator for film and magazines and is currently writing a murder mystery set in the age of migrant crises and climate change. You can follow her on Twitter @GWeynerowski