Islamic headscarves and veils continue to be the subject of intense debate in Europe. Countries’ approaches toward the burqa and niqab, which cover the face, range from tolerance in the UK to an outright ban in France. Reactions of Muslim women to restrictions have varied, including protests by some, reluctant acceptance by others and also support for bans.

But what happens when a woman who has worn a niqab, sometimes for years, makes the decision to leave it behind? 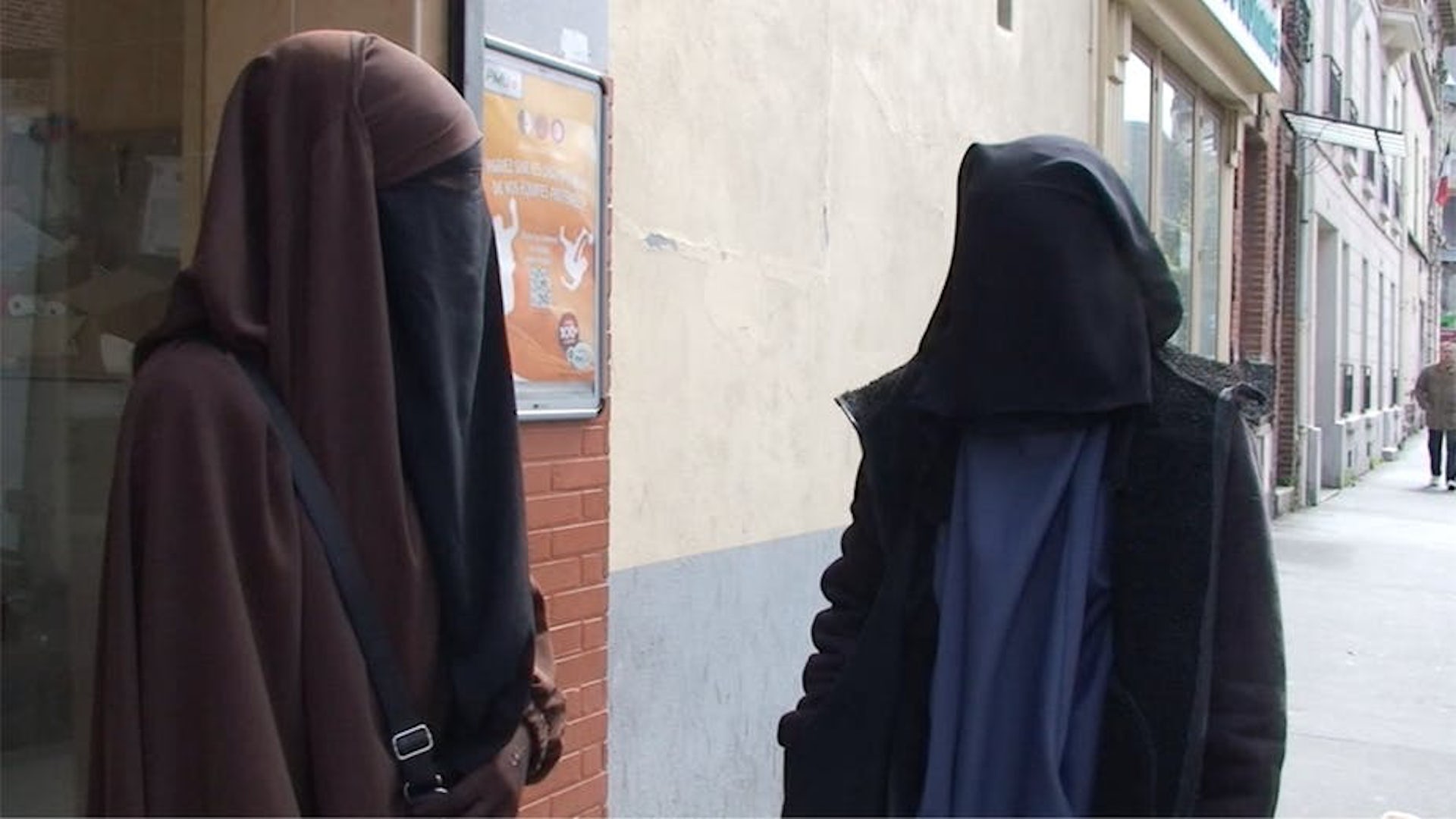 Hanane and Alexia – whose names are pseudonyms to protect their identity – were both born in France. Hanane grew up in a non-practicing Muslim family, while Alexia converted to Islam at age 22. For five years they both wore a niqab. Hanane began in 2009, just before France banned the full-face veil, while Alexia adopted it later. Once ardent defenders of the right to wear the niqab, both women have now completely abandoned it. But the transition took place gradually and was accompanied by a growing distance from extreme Salafist ideology.

On January 10, during the New Year’s discount sales in France, Alexia and I met near Paris’ Gare du Nord train station. She wanted to buy clothes and “start living again”. In the first shop she bought four slim pairs of pants and a trim jacket. She then tried out some Nepalese clothes designed for Western tastes, including a colourful jacket and pants with huge bell bottoms.

As she came out of the dressing room, Alexia gauged herself in front of the mirror: “It’s really me, I finally feel like myself again after years of being locked up.” With her hair brushing her face, she looked like a modern woman, fully alive. I was impressed with her metamorphosis: it’s hard to imagine that she wore a niqab for five years and was one of the most radical women I’d ever met.

I met Alexia in August 2011 in the context of my research on the full-length veil during a demonstration by the Salafist group Forsane Alizza (literally Knights of the Pride) in a city near Paris. She was wearing a niqab and presented herself as the wife of one of the group’s leaders.

We considered all Muslim supporters of the French Republic to be unbelievers. We were doing the takfir (excommunication) against those who did not practice like us. We were opposed to the taghout (idolatry in the broad sense), i.e., the state and institutions. We defined ourselves as ghûlat, which means ‘extremists’ in Arabic.

Estimates of the number of women who wear the niqab vary widely, from a few hundred to several thousand. In terms of even France’s Muslim population the percentage is tiny.

‘The niqab was protecting me’

I’ve known Hanane even longer than Alexia. We met during a January 2010 demonstration of women in niqab at the Place de la République in Paris and then in front of the National Assembly. She and others were protesting a proposed measure that would outlaw concealing one’s face in public.

At the beginning of 2017, Hanane reached out to ask me to help her write a book about her life. In the book she’d like to write, Hanane doesn’t want to denounce the niqab, but to tell the story of the rapes she says were repeatedly inflicted by her father-in-law. To her, they help explain her involvement in Salafism.

Religion brought a lot that helped me escape from the trauma of rape. I was 19 to 20 years old when I started wearing the niqab, I took it off when I was 25. The further I went, the more I wanted to cover myself. The niqab protected me, I liked hiding from men. I could see them, but they couldn’t see me.

Unlike Alexia, who decided on her own to begin wearing a veil, Hanane remembers the influence of her social circle at the time:

We were a bunch of girlfriends and wore niqab almost all at the same time. In our group the earliest was Ayat Boumédiène, who adopted it more than two years before the law. At first everything was normal with her, and then she started to organise gatherings to encourage us to take up arms. It was her husband, Ahmadi Coulibaly, who turned her head – he was low-key until he went to jail. Ayat wanted to introduce me to a man she said I should marry, she really pushed hard. He was later imprisoned for murder. Thank goodness I didn’t give in – I’d be in Syria today.

On January 9, 2015, Ahmadi Coulibaly attacked the Hyper Cacher market near Paris. Boumédiène left Paris one week earlier, and was spotted at the Istanbul airport. She remains at large. Coulibaly killed five people during his attack and died when the police assaulted the grocery store in which he was holding hostages.

‘I felt like I was getting out of jail’

When France banned full-length veils in 2010, some of the women who wore the niqab switched to the jilbab, which covers the whole body except the face, while others gave in to public pressure and ceased wearing it. Both Alexia and Hanane are different: they say they’ve turned the page completely.

Alexia has even become a fierce opponent of the Islamic veil and Salafism. She continues to define herself as a Muslim but reads the texts with a critical eye. Hanane admits that she has become less diligent in her rituals: “I often skip prayers or make them late. Some days I don’t even have time to pray. When I wore the niqab I was a little more regular, even though I was often late.”

Both say they’ve put aside the more radical texts they once favoured, and no longer frequent fundamentalist websites. But this process didn’t happen all at once – it took several months. Alexia says she decided to remove the niqab on the advice of the man who shared her life at the time. A convert to Islam and Salafism, he was a supporter of conservative dress for women, but nonetheless suggested she cease wearing the niqab:

When he saw my physical condition, he asked me to remove the niqab – he feared for my health. I had worn it to please Allah, but because of the lack of sunlight I wasn’t synthesising vitamin D any more – my health was failing. I followed his advice, but it’s been long and hard.

When I took the niqab off, I felt like I was getting out of jail. But that doesn’t mean I was released – I still felt bad. It takes years to get by and I haven’t finished cleaning my head yet.

Hanane abandoned her veil after the attacks on the French satirical magazine Charlie Hebdo in 2015 because she feared for her safety, facing more and more insults in the street. She said the hardest part has been the exclusion from her social circle:

Since I removed my veil, many of my Muslim sisters no longer want to talk to me. I find them stuck-up and unfair, because anyone can choose to take off their veil. A few rare ones talk to me, but it’s not like it used to be.

For a long time Alexia would put her veil back on when returning to her old neighbourhood in northeast Paris where social and religious conservatism is strong in certain communities. Then she finally changed her life entirely.

My life began to change when I enrolled in a gym, which allowed me to get out of the Salafist social networks that were my only source of socialisation before. Then I got a job and then I finally said goodbye to my past.

And it was at this job that she met the man whom she would marry. He is not Muslim and the civil marriage took place at city hall, an unthinkable choice for this woman who once hated French institutions.

In hindsight, neither Alexia nor Hanane spoke of their “exit” from the niqab as a liberation. Instead, the experience has left them with a bitter taste. They say they were convinced at some point in their lives of the importance of wearing a full-length veil: Alexia believed that she was achieving Muslim perfection and giving meaning to her life – she imagined meeting the pious and virtuous man who would save her from her life as a single mother. For Hanane, the goal was to heal the wounds of an adolescence torn apart by family trauma and foster care.

Alexia now feels that this period cost her years of her life and expresses anger at the propaganda coming from Saudi Arabia. She blames the entire system that indoctrinated her, even though she acknowledges it was, in a sense, voluntary. According to her, the Islamic State benefits from the naivety of those who believe they are committed to Salafism for legitimate reasons.

Even if they’ve both renounced the niqab, neither Hanane nor Alexia support the 2010 ban. Hanane told me recently: “The law is counterproductive. The only way out is by yourself. The ban will never convince any woman to take it off.” Alexia has the same reaction, saying that the law that has led some women to cut themselves off from society and that some might adopt it as a rebellious gesture.

Testimonies of those who’ve chosen to “leave the niqab behind” are rare. The number of women who have adopted it is extremely low, and the ones who then choose to renounce it must often sever their old relationships and adopt what is in many ways a new identity – they change their e-mail addresses, phone numbers and move on completely. For them the full-length veil has become something firmly in the past, representative of a transitional stage in their lives.