A Review of The Elephant in the Brain: Hidden Motives in Everyday Life by Kevin Simler and Robin Hanson, Oxford University Press, (January 2, 2018) 418 pages. 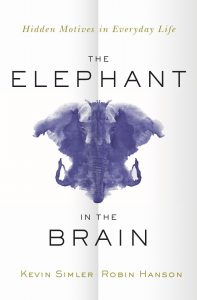 “The elephant in the room” is any important and obvious fact that, for whatever reason, no one is willing to talk about. In their new book, The Elephant in the Brain, authors Kevin Simler and Robin Hanson extend the concept to one the most important and obvious, yet unspoken, facts about the human mind: that we are masters of self-deception, equipped by evolution with an “introspective blind spot” that hides our deeper, selfish motives, even when the same motives are easy to spot in others. The result is an entertaining and insightful book that sheds light on a diverse collection of perplexing human behaviors — from laughter to religion to the origin of language.

For fans of books like The Selfish Gene and The Mating Mind, The Elephant in The Brain will be familiar territory. But for almost everyone else, the core thesis is likely to be extremely challenging. That’s because our introspective blind spot is not unlike the literal blind spot in our eye, located where the optic nerve connects with our eye’s disc of photoreceptor cells. Thanks to an evolutionary adaptation, our brain automatically fills in the hole using information from the surrounding context, creating the illusion of a continuous field of vision. We can easily verify that the deception is taking place with imaging techniques or simple optical illusions, and yet knowledge of its existence cannot make us any less blind to our own blindness.

Unconscious self-deception in the social domain works similarly: easy to demonstrate but impossible to switch-off. Thus for any action with a mix of sacred and profane motives — as much Good Samaritan as quid pro quo — we are willfully blind to the latter, not as conscious manipulators, but because strategic ignorance of our Machiavellian side had survival value for our ancestors. As the renown evolutionary psychologist Robert Trivers once put it, “We deceive ourselves the better to deceive others.”

The core thesis of The Elephant in the Brain is that this has major implications for public policy that we are loathe to admit. Thus spending on health care, we learn, isn’t merely about improving our health; it’s also a wasteful way to signal our caring for others. Admitting this, we could conceivably cut medical expenditure in half and be no worse off. Likewise, charitable giving isn’t just, or even mainly, about doing good in the world; it’s also a way to flex one’s wealth and generosity while bathing in the “warm glow” of peer approval. A movement dedicated to “effective altruism” could rectify this by subjecting philanthropic causes to utilitarian rigor.

In short, everything from higher education to belief in god is best understood through the prism of an elaborate mating ritual predicated on innumerable intersecting status competitions. The corollary is that evolution has made us strategically blind to these ulterior ends, so much so that we are often deeply offended by the suggestion that our motives are anything less than pure — which may be why it has taken a tenured professor and an independent writer to do the job comprehensively.

Many readers will chafe at the reductive, cynical view of humanity offered by Simler and Hanson. But the correct response is much closer to: No duh! The ubiquity of sexual selection in the animal kingdom is beyond dispute — from the peacock’s tail to Trump Tower. Adults are happy to admit this of their younger selves given sufficient emotional distance. But for the typical middle school nerd whose neocortex dropped before their balls, the brief window of unfiltered pattern recognition into hormonal human dynamics may be as close to the alien-scientist ideal as any human observer can come. Nonetheless, for our contemporaries, a meta-norm against discussing our continuity with the animal kingdom leads to polite denial of our biological imperatives. Simler and Hanson are clearly cognizant of this fact, which explains why the book is largely an exercise in simply convincing the reader of the elephant’s existence by hammering away with example after example.

As a result of that hammering, The Elephant in the Brain ends up being light on public policy upshots — far more Theory of Moral Sentiments than Wealth of Nations. That’s unfortunate, since the ideas in the book are bursting with potential applications. Worse, however, is the scant attention paid to helping the reader pick up the pieces of their shattered psyche. Instead, Simler and Hanson simply highlight the need to better align public institutions with our hidden motives, leaving the all-important “how” question relatively untouched.

Take cheating. “Everybody cheats,” declare Simler and Hanson. “There’s no use in denying it … Most of us honor the big, important rules, like those prohibiting robbery, arson, rape, and murder. But we routinely violate small and middling norms.” Even our ancestors were incorrigible cheaters, as shown by “the fact that our brains have special-purpose adaptations for detecting cheats,” manifested in the elusive search for sincerity in the eyes of a suspected liar. The best liars are therefore the ones who believe their own lies, and “drink their own kool-aid.” It’s a feat humans accomplish with the aid of self-serving excuses, what Simler and Hanson call “pretexts” (“I didn’t steal it. I borrowed it.”), that help us construe our misbehavior in a better light.

Fascinating, but now what? Rather than provide a set of policies for addressing our cheating nature, the book simply moves on to another human frailty. Fortunately, criminologists have been studying the use of self-serving pretexts, known in the field as “techniques of neutralization,” since the 1950s, and have developed a small but real literature exploring their public policy application. The philosopher Joseph Heath, for example, has used the theory of self-serving pretexts to propose that conventional business-ethics courses, which today focus on abstract readings in meta-ethics, be replaced with practical training in how to identify and preempt self-serving behavior. “The goal,” Heath writes, “would be to bring to conscious awareness certain patterns of self-exculpatory reasoning, and to flag them as suspicious, so that students will be less likely to accept them at face value when they encounter them later in life. The goal, in other words, would be to neutralize the neutralizations.”

“Conscious awareness” is the key term. Like our visual blind spot, our cheating natures are impossible to excise. Hypocrisy is our evolutionary original sin. Yet unlike our ancient visual system, it at least seems possible to tame the social aspects of our adaptive unconscious with the right self-help techniques, from classroom exercises to mindfulness meditation. This was essentially the strategy developed by the Cynics of ancient Greece. Through rigorous training, the Cynics managed to forgo the pursuit of wealth, sex, and fame in favor of mental clarity and rational ethics.

This is the direction I had hoped The Elephant in the Brain would lead. After all, the elephant in the brain is located squarely in what psychologists call our brain’s “System 1,” or the automatic, noncognitive, and fast mode of thinking. That still leaves our “System 2,” or analytical, cognitive, and slow mode of thinking, as a potential tool for transcending our lowly origins. By failing to give our System 2 mode a balanced consideration, The Elephant in the Brain inadvertently falls into the expanding genre of pop-psych books that simply recapitulate David Hume’s famous assertion that “reason is, and ought only to be the slave of the passions.”

The psychologist Jonathan Haidt has been at the forefront of the Humean revival. In his book The Happiness Hypothesis, Haidt advances a version of Hume’s position with the metaphor of “The Elephant and the Rider,” to which the title of The Elephant in the Brain is clearly indebted. According to Haidt, our rational self is like the rider of a large elephant, our non-rational or emotional self, who believes they’re in control, when in truth the rider is at best an auxiliary to the elephant’s whims.

Work like Haidt’s, and by extension Simler and Hanson’s, represents an important corrective to the naive Enlightenment belief in all-powerful human reason. But it is equally important to recognize noncognitivism’s practical limitations. By seeing human motivation as, in a sense, “passions all the way down,” the classical Humean view generates an infinite regress (“The elephant in the elephant in the elephant in the…) that has a kind of Cartesian skepticism (doubt about the content of one’s own beliefs) as its logical conclusion. This concern is what ultimately led Immanuel Kant to reject Hume’s pure psychologism, not by refuting Hume directly, but rather by arguing that Hume’s view was in a sense cognitively inaccessible — that it represented a position that was literally impossible to conceptualize.

Haidt’s more recent book, The Righteous Mind, helps to illustrate the pragmatic problem. In it, Haidt argues that Liberals and Conservatives derive their disparate political positions from differences in disgust sensitivity and responses to theorised moral foundations such as Care/Harm, Loyalty, Obedience to Authority, Fairness and Liberty. Haidt, and other psychologists theorise that people construct their rational belief systems to justify their moral intuitions. Without denying Haidt’s empirical findings, an inviolable application of this theory raises an obvious question: How can one ever hope to hold to a rational political philosophy at all?

How to Train Your Elephant

The thesis of The Elephant in the Brain runs up against a similar impasse. How can one write sincerely about everything having a cynical motivation? Simler and Hanson hint at the paradox when they address their own motivation for writing the book — “To put it baldly,” they write, “we want to impress you; we’re seeking prestige” — but ultimately fail to do the question justice. After all, there are many ways to seek prestige, and yet they chose this one in particular. Simler, for instance, walked away from his dream job at Palantir in 2013 after seven years in order to pursue readings in psychology, while honing his writing in an obscure corner of the internet. As a reminder, Palantir is among Silicon Valley’s most powerful technology companies, and Simler no doubt left behind substantially higher earnings and social status in the process.

That’s not to say that signalling for prestige didn’t still play some role in Simler’s decision to co-write The Elephant in the Brain. It’s just to say that the cynical motive dramatically underdetermined his ultimate life course. Instead, it seems like Simler was ultimately able to transcend the Silicon Valley rat-race with the employ of his System Two, or cognitive, mode of thinking. That is, he was rationally persuaded to pull the elephant by the reins and steer his life towards truth-seeking.

Hanson, for his part, runs a blog predicated on the notion that we can “overcome bias,” particularly of the noncognitive variety. In fact, between Simler and Hanson there may be no two people better qualified to write a how-to guide for rationally wrangling our mental pachyderm. Perhaps that should be their next project.

Samuel Hammond is the poverty and welfare policy analyst for the Niskanen Center. He tweets @hamandcheese