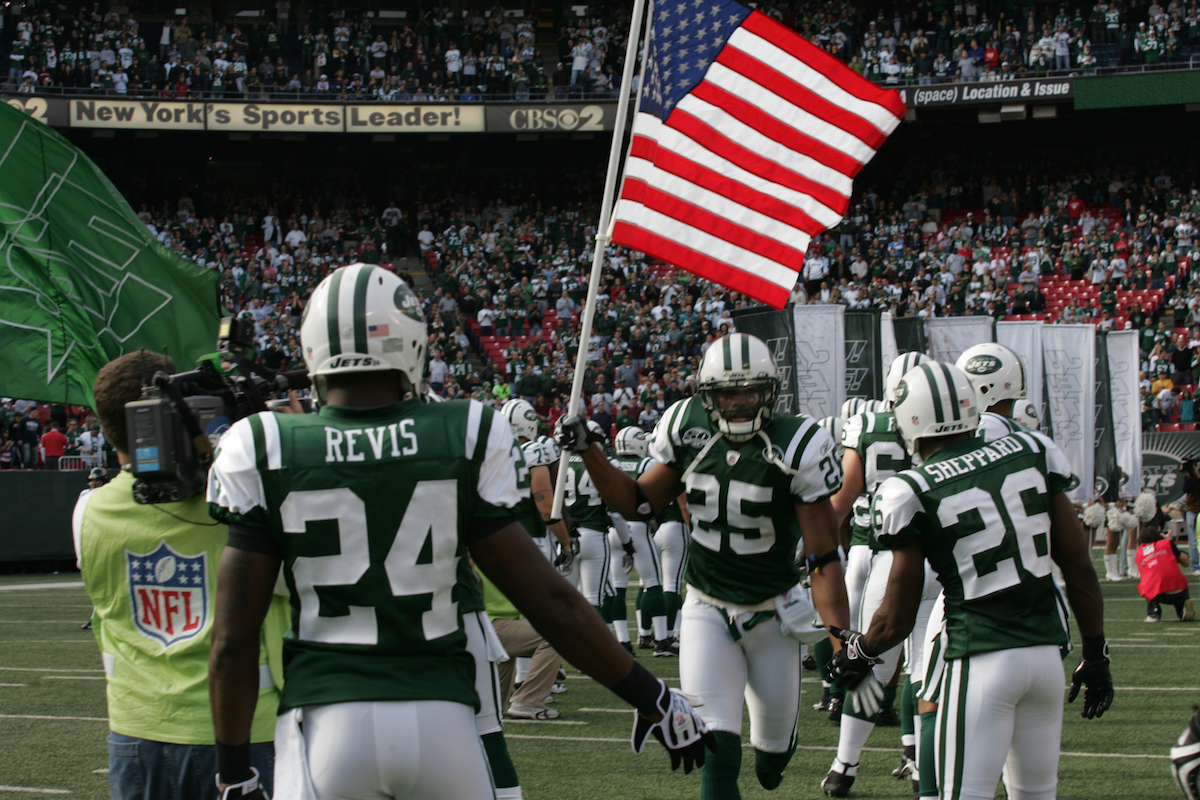 The NFL “take a knee” efforts continue. On Sunday, October 15, German soccer team Hertha Berlin took a knee and asked “for an open-minded world,” hip-hop artists such as Eminem are writing songs in support of the protest, and former San Francisco 49ers quarterback Colin Kaepernick has filed a grievance claim against the NFL, alleging the owners colluded to keep him from being signed.

When Mr. Kaepernick first refused to stand during the playing of the national anthem, he was asked by a reporter about his actions. Mr. Kaepernick responded:

I am not going to stand up to show pride in a flag for a country that oppresses black people and people of color. To me, this is bigger than football and it would be selfish on my part to look the other way. There are bodies in the street and people getting paid leave and getting away with murder.

Mr. Kaepernick is sincere, but protesting the flag to protest police brutality is just throwing the ball in the wrong direction. His statement calls for a clarification of the definition of oppression by a country, and a further clarification of what the United States flag and the national anthem actually represent. This is the difference between structure and content. The structure–that is, the foundation and framework of our country–is represented by the Constitution and the Bill of Rights. Problems within the country are the content, and the founding documents allow us to solve these problems–albeit in piecemeal and incremental fashion–just as we have for the last 241 years. The flag and the national anthem represent the structure, not the content.

Mr. Kaepernick is correct in one part of his statement: we absolutely do need to have an objective national discussion about how to prevent wrongful police action that results in the death of a civilian. I don’t agree that the police were guilty in all the cases that have become public knowledge in recent years. I am generally pro-police, and cops face their own mortality on a regular basis. Other than soldiers, none of us knows what that is like. But there have been enough situations in which police officers have been culpable in these deaths to warrant an open, honest discussion. (One side shouting “black lives matter” and the other side shouting “blue lives matter” does not qualify as a discussion.)

Some of these cases have exposed serious problems within a police department overall. Freddie Gray, for instance, was not the first person to suffer a “rough ride” from Baltimore police. It was common practice for some officers to give rough rides to those in their custody, despite the fact that this practice violated Baltimore Police Department policy. Other lawsuits relating to this practice preceded the death of Mr. Gray. If police officers are regularly ignoring department policy, and if they are doing it over time without leadership taking firm action to stop it, that is by definition a systemic problem.

But is it “oppression”? There has been a tendency in recent years to water down definitions of certain words and then to misapply them. The word “oppression” is thrown around far too casually. The educational system is oppressive, lack of universal health care is oppressive, male egos are oppressive. There are two ways in which this is done: lowering the bar on what qualifies as oppression, or generalizing a local offense to the larger society (which is what Mr. Kaepernick did).

The problems with lowering the bar on what qualifies as oppression are that we lose perspective on what true oppression looks like; we forget that many people in the world suffer far more than we do; we keep ourselves in a state of perpetual victimhood; and we forget to be grateful for the hard-won progress that has been made in the United States on various issues over the years and decades.

The problem with generalizing a local problem to the country as a whole is that it indicts the entire national system for the actions of a few. It is sort of like saying “men are pigs” or “liberals are crazy.” It is simply inaccurate as a blanket statement, and will win resentment from those who, rightfully, don’t deserve that description.

We need a bit of perspective, and for this, we will go to the work of Freedom House, a non-governmental organization which produces an annual report entitled ‘Freedom of the World.’

Freedom House was founded in 1941. Bipartisan from the beginning, its early supporters were both Republican (Wendell Willkie) and Democrat (Eleanor Roosevelt). It was created in response to the threat of Nazism, and continued its work against totalitarianism after World War II. True to its bipartisan nature, it was an active voice against Communism, yet firmly opposed the McCarthyite reaction of the 1950s. More recently, it has criticized both Barack Obama, for leaving the United States in a weaker position globally, and Donald Trump, for espousing positions during the 2016 campaign that raised concerns his administration would disregard America’s traditional strategic global commitments to democracy and human rights.

The Freedom of the World reports contain analyses of the state of freedom in all countries and territories of the world. The Freedom House methodology scores each country on both political rights and civil liberties. They use questions grouped as follows:

Each country’s political status on rights and civil liberties is then rated on a scale of 1 (most free) to 7 (least free), and the country is placed into one of three categories: free, partly free, and not free. Each country also has its own narrative report, in addition to its numerical score.

In Saudi Arabia, political parties are forbidden, dissent is criminalized, and the authorities take strong action against anyone who calls for change, including Raif Badawi, a human rights activist who was sentenced to 10 years in prison and 1,000 lashes for “insulting Islam,” and Sheikh Nimr al-Nimr, who was imprisoned for leading an anti-government demonstration, and was executed in 2016.

In North Korea, surveillance is pervasive, random arrests and detention are common, there are no known associations or organizations that are not actually created by the state, and the state maintains a system of camps for political prisoners, who suffer from torture, forced labor, starvation, and other atrocities.

In Syria–which has the worst record of all 195 countries evaluated for the 2017 report–freedom of assembly is severely restricted, the regime controls most domestic news outlets, and civilians who criticize the state face detention, torture, and death; a fact that was graphically illustrated when a military police forensic photographer defected in 2014 (three years after the uprising began in 2011) and brought 55,000 photographs that showed large-scale torture, starvation and death of prisoners.

Finally, here is the record for Cuba. It is included even though it does not have a 7/7 score (it narrowly escaped this distinction by receiving a 7/6) because in August 2016, Colin Kaepernick wore a t-shirt with an image of Fidel Castro on it to a press conference. When asked about this later, he said that he supported only the investment in education and healthcare by Castro, and not the oppression.

To this, I would ask Mr. Kaepernick: if literacy and free healthcare are so valuable, why have hundreds of thousands of Cubans left their homes to come to the United States? I believe that some people in the United States have a naive, soft-focus view of what it is to live under a totalitarian regime. They talk blithely about admiring a government-controlled healthcare system from the vantage point of living in a free country. Clearly, for many Cubans, their education and healthcare are not worth the sacrifice of individual rights and liberty.

In Cuba, all political organizing outside the Communist Party of Cuba is illegal, associations and organizations must be registered with and supervised by the government, and political dissidents are harassed, detained, physically assaulted, and imprisoned using laws such as “public disorder,” “contempt,” “disrespect for authority,” “pre-criminal dangerousness,” and “aggression.” The regime uses a form of neighborhood-watch groups, known as Committees for the Defense of the Revolution, to encourage vigilance against opposition. The groups use “acts of repudiation,” which are basically mob attacks, to intimidate political dissidents.

A note to all who are kneeling: this is what oppression by a country and its state apparatus looks like. It is primarily about the laws and policies that a government implements, and the inability of citizens to change those laws. Does the United States have oppression in its history? Yes. Do we have problems that need to be solved and work still to do? Absolutely. But nothing about the current challenges in the United States comes even close to the government-sanctioned offenses against citizens listed above.

It is the United States Constitution and Bill of Rights that prevent us from suffering as the citizens of Saudi Arabia, North Korea, Cuba, and Syria do. These inspired documents ensure that the people of the United States have the right to address any grievances we have against the government without fear of reprisal or punishment, that we can talk publicly about the issues, and that we can vote out people with whom we disagree. We the people can effect change, up to and including changes in the Constitution itself. It’s up to us.

The flag and the national anthem are symbols of this freedom. They do not represent any problems the nation has; they represent the ability of the people to solve those problems. They represent the hope that freedom brings. That is the bottom line, and that is why people get upset when the flag and the anthem are not respected. That is why Mr. Kaepernick’s aim is untrue–he is actually kneeling and refusing to honor the symbols of the very freedom that gives him the right to kneel and refuse to honor those symbols.

Another consequence of Mr. Kaepernick’s poor aim is that we are talking about his protest, and not about the issues he says he wants to discuss. Imagine if Mr. Kaepernick had decided to go on strike from football, planted himself on the steps of a police department (perhaps in Baltimore), and refused to move until we had a national conversation about police violence. That would have been a protest directly related to the topic he wishes to cover, and he wouldn’t have offended people by aiming at the basic structure (freedom) of the country. He might have been fired for refusing to work, but if this is truly bigger than football for him, is that a risk he would be willing to take? He might well have received more support from fans that way.

Speaking for myself, when I hear the national anthem and get up on my feet, I stand a little bit taller, my heart full and grateful, that I live in a country where one person can stand and others kneel, we can disagree with each other and with authorities in public and in peace, and we can improve our country through our own efforts. That is our foundation. I hope that those who do kneel, including Mr. Kaepernick, will consider it.