Are you a conflicted carnivore – loving meat but also hating that you love it? Perhaps you are worried about the carcinogenic, heart-clogging properties of cooked meat or the industry’s use of antibiotics creating threatening superbugs. Maybe you’re ashamed of all the wasted water and food that goes into meat production and the deforestation and damaging emissions caused by animal agriculture. Many of us also simply struggle to accept the justifications used to defend the killing of intelligent, emotionally sensitive animals.

But despite all the great reasons to opt for vegetarian alternatives, you might find that when you sit there in a restaurant with a menu in your hand, you simply cannot resist the smoky, umami-infused aroma of grilled hamburgers or sizzling, mouth-watering bacon. You wouldn’t be alone – initial findings recently presented at a conference suggests that more than 30% of meat eaters in the US, Germany and France are conflicted about eating animals. Here are five ways in which psychology may be able to help.

Most of our eating is mindless, meaning it is governed by habits, rituals (“eat turkey at Christmas”) and what is available. Mindless eating can prevent us from realising that we are being tempted. If you’re craving a carb-loaded, fatty meal when you’re hungover, you may order a burger because that’s what you’ve always done. But a falafel or a vegetarian pizza may also do the trick. Yet our power to overcome temptation depends on us first identifying that there is a conflict we need to address.

One way to counteract mindless eating then is to prepare ourselves for an upcoming temptation. If we want to cut down on meat and we know we are about to confront a situation where this goal will be challenged (for example eating out with a friend), we have an easier time achieving this goal if we commit ahead of time not to give in. One way of doing this would be to look at the restaurant menu online before you arrive and determining what to order.

The opposite of mindless eating might be called “mindful” eating, or mindfulness applied to food. This means placing greater attention on food-related thoughts and cravings as they arise. In one study 19 overweight individuals attended 10 weekly meetings on healthy eating, followed up by either a seven-week course in mindfulness centred on food cravings, or no mindfulness training at all.

The mindfulness training involved paying attention to various parts of the body for arising sensations, and attending to food-related thoughts and cravings – noticing them but not acting on them. While both groups lost weight, the mindfulness group also showed a decreased preoccupation with food. There’s no reason why this shouldn’t also apply to meat eating.

Another trick from the psychology of self control is to adopt a wider mental frame.
This is where you think about a decision, not in terms of a solitary event (eating meat in this meal), but as part of a larger set of events. For example, you may want to think about all the meals you will eat or all the animal lives you will save in your lifetime. Setting aside fish and seafood, that’s about 30 lives per year for the average American.

Wide mental frames help us cast our momentary choices within the larger goals we have for ourselves, such as helping the planet or helping animals. Putting a positive spin on your decision – “saving lives” rather than “giving up meat” – might also help you avoid thinking in terms of what are you are losing.

People currently avoiding meat tend to have a richer understanding of the cognitive and emotional capabilities of farmed animals – for example, they understand that pigs, like humans and dogs, have sophisticated emotional lives. They also are quick to connect the meat on the plate with the once-living animal source. When they see meat – they see an animal. 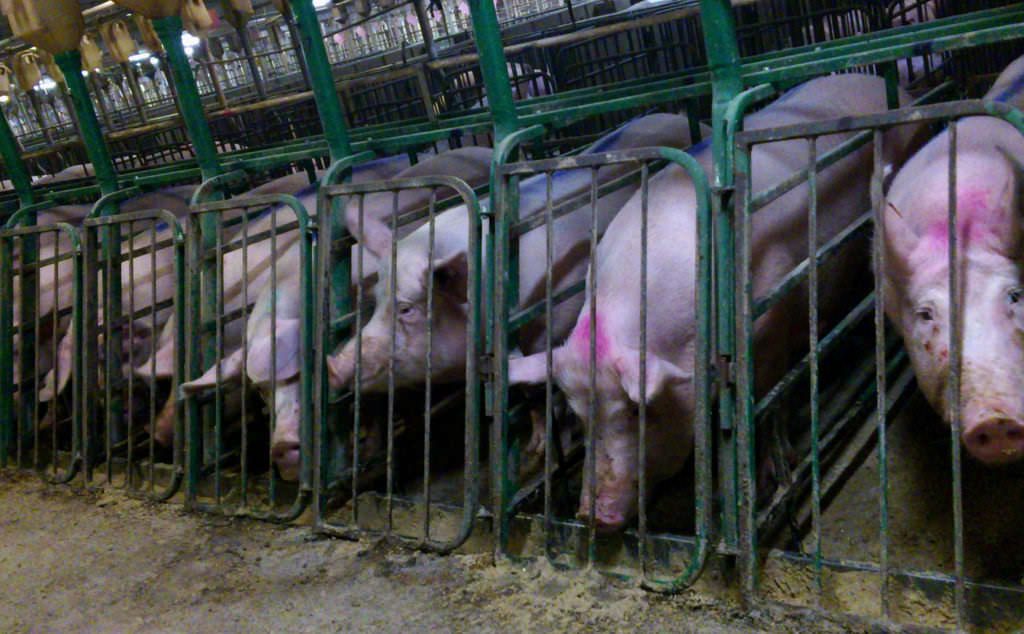 We know from recent studies that connecting meat to animals or animal suffering can spoil appetites. For example, many people find roast pork tasty, but much less tasty when the pork comes with a pig’s head on the plate. Getting to know the emotional lives of farmed animals and developing the habit of associating meat with animal suffering may be a potent tool in the meat reducer’s tool kit.

Many people who have given up being vegetarian say that they struggled to find a supportive network of like-minded eaters. Women in particular seem to be vulnerable to the challenges of coordinating their diets with others (they are often inclined to accommodate their meat-loving partners).

But it’s likely that some of your friends may have similar levels of discomfort with meat as you. So don’t fall into the trap of assuming you’re alone. And when dining with less amenable friends, you might scout out restaurants that integrate vegetarian options into their menus (as opposed to having a separate “vegetarian/vegan” section). This will avoid splintering the group into opposing pro and anti-meat factions. In addition, some research suggests it might increase the chances of everyone ordering a meat-free meal.

So if you’re struggling to become a vegetarian or just want to cut down on meat, why not give some of these strategies a try? The worst cravings may go away when you realise you can actually do it.

Jared Piazza is a Lecturer in Social Psychology at Lancaster University.

Jared Piazza is a Lecturer in Social Psychology at Lancaster University.