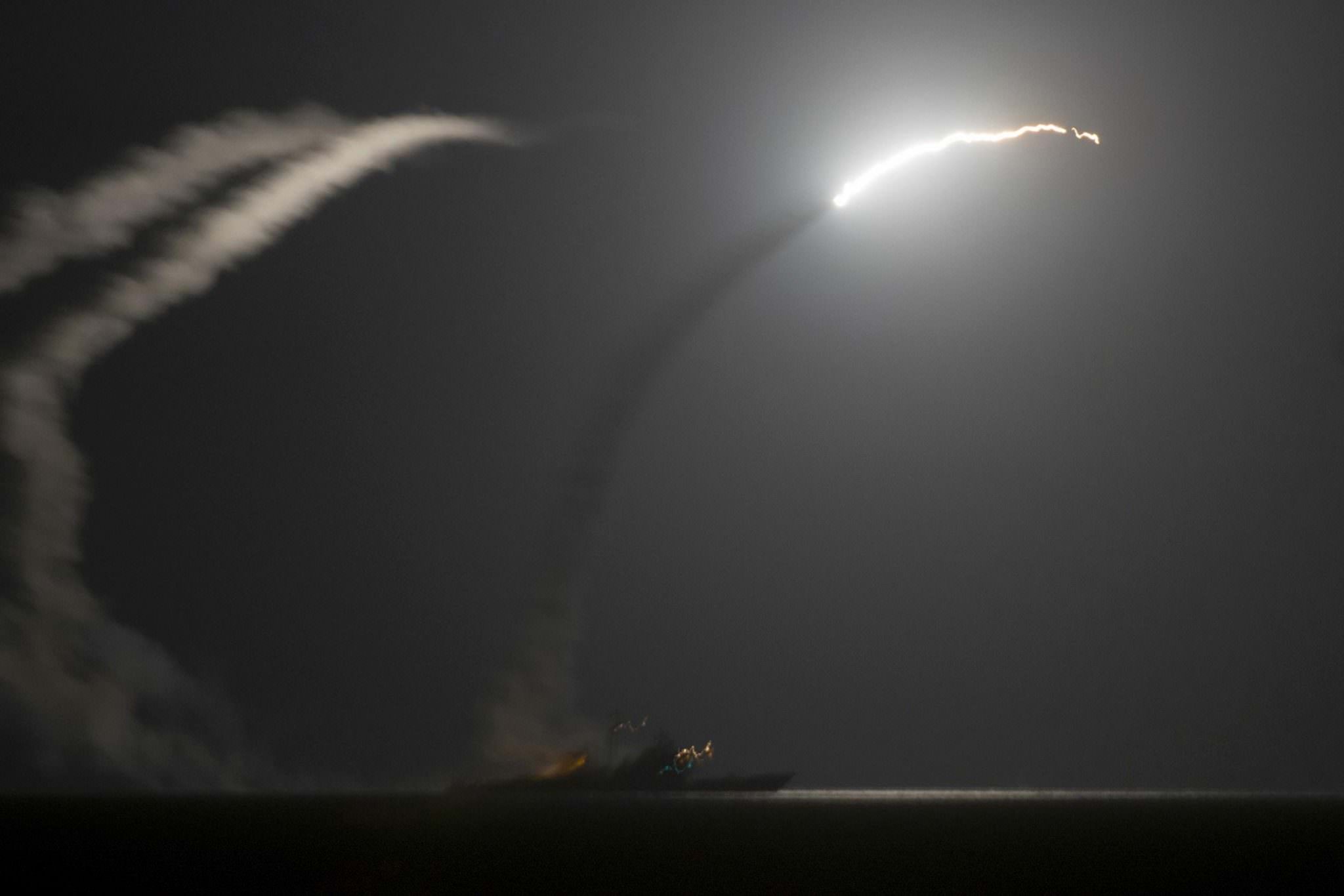 Sumantra Maitra is a regular contributor to Quillette, and is a PhD candidate in International Relations at the University of Nottingham and is a member of the Centre for Conflict, Security and Terrorism (CST). His area of research is in Great power politics and NeoRealism, with a focus on Russian foreign policy and military strategy.

What follows is a QandA session regarding the US strikes on Syria.

Hi Sumantra. Thanks for chatting with Quillette. You’ve said that the airstrike on Syria is a good show of deterrence from the US? Can you expand on this – who do you think this message of deterrence is aimed at?

The airstrike on Syria is a fall back to a more conventional US foreign policy. Since 1993, the United States has been a leader of the Western liberal order, and has often used airstrikes and missile strikes to deter principal adversaries as well as defend liberal norms. It is, of course, questionable how effective that strategy was, but it has been standard practice. That changed during the second term of President Obama, when he refused to intervene in Syria after the first time chemical weapons were used. With President Trump there was a question about whether he would continue President Obama’s detached Middle East policy, or fall back to a more conventional template.

The recent chemical attack, arguably by the Syrian regime, may have been considered a test of the Trump White House by the Assad government. It may have been a test to find out if Trump was indeed serious about a detached foreign policy, or whether or not he would defend the “liberal order”. While it’s still too early to say, it seems that the Trump White House determined that it is imperative that deterrence is re-established, at least with regards to the narrow question of the use of chemical weapons, which has been considered taboo since the First World War. So the message of deterrence is most likely a show of force that chemical weapons’ use will not be tolerated and is aimed at Assad, as well as Russia and Iran, who are the primary backers of Assad.

Why is it important to send a message of deterrence at this time? What is going on in the world that makes it important for the US to do this?

The aim of re-establishing deterrence could be a hint at the Assad regime that their use of Weapons of Mass Destruction (WMDs), even in a negligible amount will not be tolerated, as well as to Russia and Iran. In broader geopolitics, it could be considered a tacit signal to China as well.

There is an ongoing debate in the International Relations (IR) community on how President Trump views the world. There was an earlier argument that he is a Realist, which would imply that he would focus on broader geopolitical equilibrium, a Détente with Russia, and possible balancing of China, without much focus on norms, values and human rights. There are also two different opposing schools of thought within the Trump administration, with regards to focusing on Russia/China and other great power rivals or focusing on Islamism as the bigger threat facing the US Some of Trump’s personal instinct during the campaign mode touched upon Realist ideas of balancing China, cutting down unnecessary tensions and finding grounds of cooperation with Russia, demanding greater financial accountability from NATO free-riders, and opposing EU expansion and the EU itself as an economic and ideological hegemon, from a more nationalist perspective. While it is still too early, it seems like Trump is moving to the center and tempering to a more traditional liberal foreign policy approach.

The reason that it was imperative for re-establishment of deterrence was primarily one of interests. Regardless of intentions, structural factors beyond anyone’s control end up influencing the actions of a great power, and American interests are fundamentally different from Russia’s. While there are valid questions about continuous involvement in the Middle East, which is a zone of rapidly declining geopolitical importance, America cannot completely and immediately withdraw from a region even when it is prudent to do so, or look away if there are direct human rights abuses, as that might influence its relationship with other allies in other parts of the world. A case in point is China and North Korea. If this missile strike is viewed from China or North Korea as a symbol of a more proactive unilateral American administration willing to use force, compared to a more restrained Obama one, it might affect their behaviour in the South China Sea and Korean Peninsula.

Is it possible that this air strike was strategically timed to coincide with Trump’s dinner with the Chinese President?

That is unlikely. The Trump-Xi meeting was planned well in advance, and there was no inkling that the Assad regime would suddenly use chemical weapons. From what we now know, immediately after the use of chemical weapons, President Trump was briefed on his options by his administration, and within a day and half, he ordered the airstrike. The airstrike had limited operational utility, but was chosen as a symbolic use of force. It was planned and operationalized in a very short frame of time, and, therefore, it is likely to have been coincidental to the Trump-Xi dinner.

That said, it is very likely that the airstrike during a dinner would be viewed quite differently in China. What hint they will take from it, only time can tell. Chinese government and policy makers focus on scripted events, and anything that might make their leader look weak is carefully avoided. Therefore, an American unilateral airstrike in the Middle East, during the dinner with the World’s second most powerful state’s leader, might be a signal that a new sheriff is in town, who is more cavalier than his professorial predecessor. It might lead to China militarizing even more in the South China Sea thereby escalating a Security Dilemma, or it might lead China to temper its client in North Korea. We will have to wait and see which direction the wind blows.

If you're a Jihadist, nothing will please you more than watching two Great Satans battling it out. https://t.co/Ub4FgV0XRO

What are you getting at here?

There is a minor school of thought among Politically Conservative-Realist circles (mostly in Europe, a little in the US) who consider there should be more cooperation with Russia against Islamic Jihadism. The reason being, Russia, even when she is a geopolitical rival and adversarial power, is, at the end of day, a regime focused on survival. Even prior to 9/11, Russian Intelligence and policy makers were already warning the West of an “arc of instability” spreading from Afghanistan to Tunisia, which was of course, ignored by the West. This Huntingtonian school of thought believes that the West is not facing just random political terrorism as occurred with the IRA and its political demands — but a sort of insurgency — with Islamist sleeper cells and their suited apologists within Western society. Russians are not mowing down random 8 year olds in European capitals, and, therefore, by definition, Russia, the US and EU should cooperate over intelligence sharing and a joint counter insurgency to eradicate the Jihadist problem, even when there will be broader geopolitical differences between Russia and the West. A hardcore Jihadist, won’t differentiate between Russia and the US, as both are considered Crusader nations to them.

Would China be pleased to see the US drawn into another drawn out Middle East conflict? How would they benefit?

Yes, China is poised to take the mantle of US leadership when it comes to trade and climate. China has also benefited from the liberal western order, without having to share the global security burden. Moreover, China has recently started to implement their own version of the Monroe Doctrine, by militarizing their immediate neighbourhood, which they consider their sphere of influence. Their only concern is an American pivot to Asia and rapid reinforcement of American naval presence in the Asia Pacific. China, like any other prudent Realist power, considers the Middle East a geopolitically cancerous zone, and would be more than happy if the US and Russia were busy focusing on stabilizing that region, which would divert their attention away from Asia.

Will escalating tensions between the US and Russia push Russia into a closer arrangement with China?

To an extent, yes. The biggest flaw in US grandstrategy post-Soviet collapse was pursuing a liberal hegemony and promotion of values across the globe, regardless of narrow geostrategic interest. That resulted in NATO expansions, meaningless misadventures and interventions in the Middle East, and promotion of democracy in the spheres of influence of other great powers. Theories of Realism dictate that great powers are by nature skeptical of a hegemon, especially a hegemon aggressively promoting a certain ideology. Naturally, Russia and China find themselves in a tactical alignment against the US. Russia gains economically from Chinese investment and Chinese backing in  the U.N.’s Security Council, and China gains from Russian military technology.

However, there are also areas of difference between China and Russia. Russia is a stagnated mono-industrial economy, bogged down in two separate military quagmires, and demographically declining, and Russia needs China a lot more than China needs Russia. It is an asymmetric relationship.

What other thoughts have you had on these airstrikes, and Trump/Tillerson/Mattis’s developing military and foreign policy?

It is still too early to decide, as, overall, Trump’s foreign policy actions are to date very standard, and very different from his campaign rhetoric, which was sort of expected.

As a Realist, personally I’d prefer that the West wouldn’t get involved in the Middle East any further. It is a region where we have no geostrategic interest, and we reflexively oppose Russia and Iran, without ever questioning why we do need to oppose them there, and what difference it makes. There are alternatives of buckpassing, bloodletting and offshore balancing in the Middle East, but our reflexive foreign policy is one of a liberal loop of military intervention, financial aid, and managing refugees. The Western public is also tired of this loop, as evident from the non-interventionist and anti-mass migration mood from various surveys.

We have tried intervention and nation building (Iraq), intervention without nation building (Libya) and proxy war (Syria), none of them have worked. It destabilized the entire North African coastline, thereby resulting in people smuggling, uncontrolled migration, and terrorism in Europe, and arguably even Brexit. I’d personally rather focus on improving policing and Intel gathering and counter insurgency within Europe, broadly balancing China in Asia, and Russia in Europe, as well as finding common ground with both the powers if possible. But that’s just me!

Thanks for joining us Sumantra. Where can we find your scholarly articles on international relations?

In essays for Quillette, of course. I also write occasionally for The National Interest, and War on the Rocks. I also regularly write for the Centre for Land Warfare Studies. You can also follow me on Twitter @MrMaitra.

Claire Lehmann is the editor of Quillette. You can email her at claire@quillette.com and follow her on Twitter @clairlemon.