It is exhausting to write similar ledes but the subject demands special attention. The world has entered a new era, a pole was switched almost overnight, and a completely different order than the one that was followed since 1945, is upon us.

The best way to know what’s coming in front of us, is by having an open and skeptical mind, particularly towards the conventional wisdom which is now emanating from the mainstream commerical media. Unfortunately, the reactions in the last couple of days, and the hysteria which seems to be the natural state of Western politics is evidence enough that the “anti-Trump/anti-Brexit” liberals are now determined to take the completely wrong and ahistorical lessons from 2016.

The liberal reaction of Trump’s win is one of brokenness and despair, but worse than that, it is an open season of fake expertise and fairly straightforward misrepresentation. David Frum, editor of Atlantic, tweeted that Trump is the worst President in the history of US, including those who owned slaves.

The worst human being ever to enter the presidency, and I include all the slaveholders.

Susan Hennessey, editor of Lawfare and former NSA lawyer, tweeted that Trump is already violating nepotism laws. (He isn’t.) Others were even more ridiculous, in what seemed like a sea of hysteria not seen unlike the collective wail of third world communist dictators and their apparatchiks, who lost their banker with the collapse of Soviet Union.

Almost all of these are deterministic predictions, and are therefore inevitable to fail or be proven wrong, but that’s beyond the point. I am not going to make any such predictions. Rather I will try to probabilistically chart some potential courses the new Trump administration might take. Real political scientists know, that every contingency is determined by a number of unknown variables, and it is foolish to opine a conclusion about something before it has even started.

To start things off, it should go without saying, that Trump is not a Nazi (more on that here, here, and here). It is also borderline hypocritical and absurd to accuse Trump of white supremacism, and then in the same breath accuse him of nepotism by promoting his Jewish son-in-law as the most powerful aid in the White House.

I am no fan of Trump, and I completely oppose his devastating trade war plans with China (more on that in a minute), but he knows how to communicate in a simplistic, easy to understand way to uncomplicated minds. Regardless of the content, therefore, one needs to admit, it is a very effective strategy. But we also need to ask why what he has said has resonated so strongly with the masses rather than dismiss his statements out-of-hand.

A careful analysis of Trump’s platform during campaigning, as well as in his inauguration speech will point to three broad ideas, two of which makes complete sense, and one being (in my view) absolutely insane.

The first idea is nation building. Trump wants to invest heavily in infrastructure, and focus on inner US. He constantly assures his policies will focus on bridges, cities, roads, infrastructure, space exploration, innovation and hard science. It is a commendable goal, and it is about time US refocusses on these issues. Infrastructure helps in boosting economy, and invites investment. A new space age is also needed as quite simply, humans need to be a space faring/colonising species to survive, simply because Earth’s resources are finite, and cultural and structural differences between different parts of the world will mean ever growing inequality, differing rates of births, jobs and peace, and chances of future civilisational conflict.

His second idea is of American retrenchment. Here he is a little incoherent, but one can imagine the overall drift. America is a uniquely safe country, and will now look after national interests more than safeguarding an international order. It will stop promoting democracy in geopolitically cancerous zones with ever declining geostrategic interests.

This means simply three things: firstly, the days of allies milking American taxpayers for their own security is over. The reason rich European great powers atrophied their own hard military power is because they could concentrate on increasing social spending, at the cost of American security umbrella. Those days are over.

Secondly, the U.S. will get out of the nation building business, from regions which are, quite frankly, at a different stage of societal evolution, and which have been ungrateful and antagonistic to American stabilising/nation building/democracy promoting efforts to date.

Thirdly, it will mean, the U.S. will align itself with any Great power (including secular authoritarians) which will stand against Islamism. As I have written before, this is by far the broadest departure from bipartisan “Not all Muslims” rhetoric post 9/11. One can agree or disagree with any or every of these policy choices, but the American public support him.

There is however, one position, which I believe is counterproductive at best and dangerous at worst. That is Trump’s idea of a brinkmanship with China.

Trump wants to get back to lily white, 1950s style manufacturing in US, as well as prescribe economic protectionism, raising tariffs and confronting China in South China sea, while simultaneously opposing TPP. Unfortunately, these policies are frankly unrealistic and are not possible without a mutually destructive trade war, or worse, outright war.

First of all, the economic center of gravity has shifted Eastward in the last twenty five years. That is an irreversible trend. There is simply no easy way to explain this, but Western societies, with their high labour wages, sky high social security, and ever growing institutional barriers, are no competition to a lean decision making apparatus and low cost state backed production system in Asia.

Raising tarrifs and making foreign production punitive will lead to either companies moving their innovation and production out of US, or raising the cost of the product, which will both be devastating for the middle and working classes. Not to mention, it could damage most vital allies of US in the region, it could lead US allies to lean towards a Chinese led globalised trade order, or it could lead to outright bandwagoning with China.

A confrontation with China over Taiwan or the South China sea would be even more baffling. Taiwan is of no vital strategic importance to US, and the simultaneous attempt at balancing China and Russia is one of the biggest geopolitical blunders of United States in recent history. To put it simply, China is not like the expansionist and confrontational Soviet Union of the 1950s-60s. It is also heavily integrated in global burden sharing, trade, and intelligence cooperation. All that can be jeopardized with needless brinkmanship.

What I have outlined above are valid critiques of Trump’s policies which need to be vigorously pursued through constitutional channels and via Senatorial and Congressional opposition.

Unfortunately, the last two days have proved that the lessons of 2016 went unheard for many middle class liberal elites. There’s a patent surrealism in Madonna calling herself marginalized in an allegedly patriarchal society, while talking about blowing up the White House. There’s a rich irony in thousands of women marching in a movement led by someone who has promoted sharia law in the US: 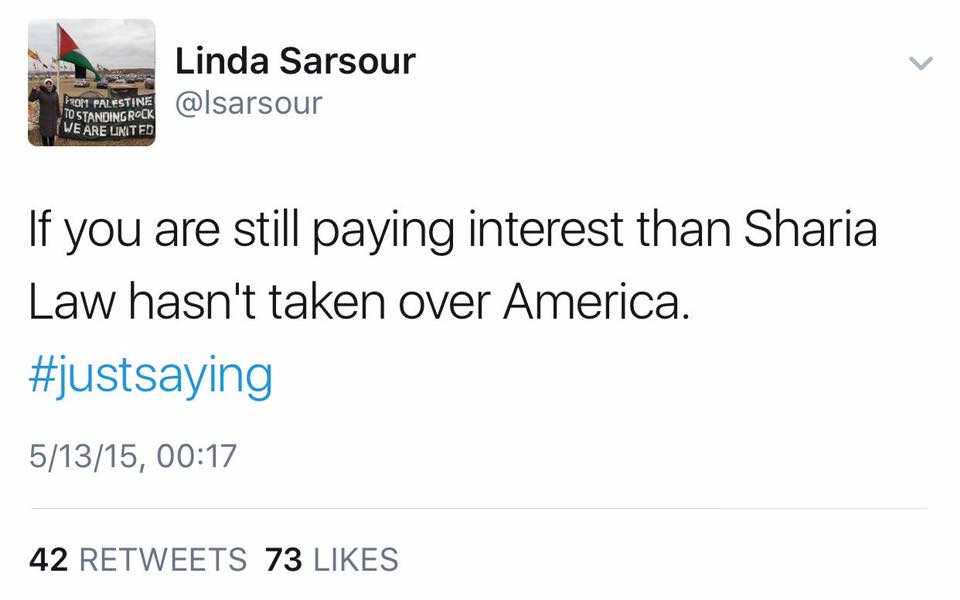 It is also ironic to see full black clad “activists and protesters” burning Limos, smashing Starbucks and the Bank of America, while apparently opposing “fascism”.

Protesters smashed windows of a Starbucks and Bank of America in Washington, DC, during Pres. Trump's inauguration https://t.co/1y4sqXWCep pic.twitter.com/iupe72TeNt

It’s unnervingly Weimarian, when a flawed — but legitimately — and democratically elected government faces relentless rioting and opposition. And an opposition that decries almost every supporter of the said government to be fascists or foreign agents. This will only accelerate polarization, and paves the way for real Nazis promising order and retribution against uncontrolled hooliganism, next time.

Chaos begs for order and revolutionary forces inevitably lead to more reactionary forces. All black clad middle class marchers burning flags and taking photos with their iPhones, while being encouraged by celebrities indulging in their five minutes of virtue signaling, will do well to remember this centuries old wisdom — because sometimes what you fear, you end up creating.

Sumantra Maitra is a doctoral researcher at the University of Nottingham, UK. His research is in Great power politics and Neorealism. You can find him on Twitter @MrMaitra.

'The Genetic Lottery: Why DNA Matters for Social Equality'—A Review