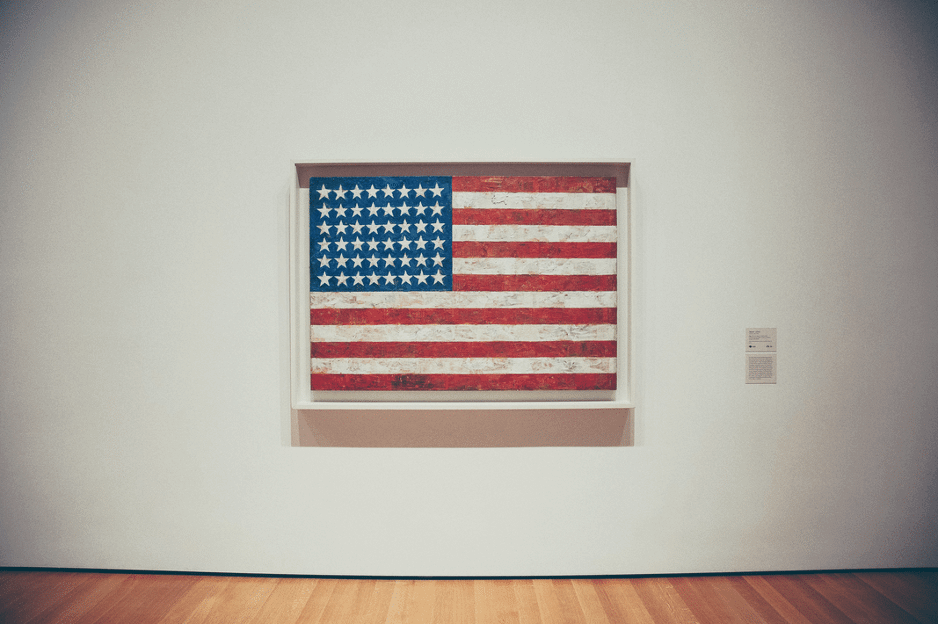 As a French-American philosopher, I’m increasingly struck by how much the American scene has come to reify the cold Thatcheresque vision of a post-society society. Where all that actually exists is a collection of swashbuckling individuals duking it out on the open market of self-interest. As anyone who has lived in this country for any length of time will attest, Americans see themselves first and foremost as consumers. Their status as citizens is decidedly second place.

Still, they share a considerable degree of nationalist sentiment. Americans love to see the stars and stripes at virtually any place and time, be it at athletic events, draped over businesses, stitched into their clothing, or flying proudly above their homes. Interestingly, these sorts of things don’t happen nearly as much in other developed countries. That’s perhaps because unlike them, many Americans see their country as a city on a hill — a nation that answers a higher call to let the human spirit achieve all that it may. Setting aside the fact that this is also pretty much the founding ethos of every other modern democracy on the planet, it does underscore an important truism: America stands for something. It has a common culture, no less distinctive than England’s, France’s, or Japan’s.

And yet, if we ask Americans to define the values that bind them in their culture, they may find themselves at a loss. The French however will have no trouble answering this question. They’ll usually exclaim something like “la cuisine!” They invented the word “gastronomy” and are nothing if not Epicureans. Quality food and drink are at the core of the French character. They function as a gateway to a wider appreciation of great art and beauty, which are essential to their conception of the good life. France is clearly very proud of this tradition and strives to ensure that all its citizens understand and respect these values and have access to their fruits at least to some significant extent. Schoolchildren for example, are given ninety minutes for lunch — long enough for many of them to walk back to their house for a home-cooked meal. Through such traditions, the French instill a culture of refinement in their people, so that they may learn to take the time to recognize and appreciate good food through their own senses without having to rely on the intermediary of nutrition labels.

When I ask myself what activities, on the other hand, Americans spend most of their spare time doing, the first thing that comes to mind is buying and selling. Americans are nearly always consuming and marketing. They devote inordinate amounts of time to purchasing and thinking about purchasing and building relationships around purchasing. They happily spend countless hours rating products and services for the benefit of complete strangers — discussing and promoting those that they approve of face-to-face and on the Internet. Theirs is a thrilling consumerist world where anyone’s likes offer a golden opportunity for capitalization. Even a disaster memorial can generate a brandable slogan like “Boston Strong” to be sold on T-shirts and bumper stickers for years to come. No one seems to consider for an instant that this might be tacky or distasteful. A dollar is made and that’s what it’s all about.

Americans love advertising. They can’t get enough of it. To such an extent that it’s almost as if their entire lives are subsumed by it. For many, their very personal identities have become branded platforms to capitalize upon. This more than anything is what sustains American culture. It’s not even a culture so much as a marketplace, where quality gets subordinated to quantity. Americans scarcely write books, create music, make films, or design much of anything anymore that isn’t striving above all to rake in as much money as possible. As a result, consumers are king — utterly spoiled and capricious — expecting to get everything at a bargain if not completely free. If their attention isn’t entirely captivated and sustained as long as their fickle wants dictate, they turn to something else. Why take the trouble to acquire and develop refined tastes when the crudest impulses can be satisfied at a moment’s notice?

Pinpointing consumer demand and satisfying it as effectively as possible is what America has come to stand for. It’s what binds us as a culture. It’s the drive that gets us up in the morning. And that’s the problem. It’s far too flimsy a fiber to weave a social fabric. For society is not a mere collection of consumers. If it is to exist at all, it must be in shared ideals to progress beyond past achievements by building on the teachings of its elders.

So what sources of knowledge do American turn to these days? Do they study history, literature, and philosophy anymore? Hardly. History departments in particular, along with most of the humanities are struggling to survive. Nearly everyone wants to major in something practical and vocational — usually some form of business. There are many reasons for this, one of which is the increasingly elevated cost of college, which naturally fuels debt anxiety. But beyond that, even our relatively cultured President Obama couldn’t resist taking a shot at the humanities, going so far as to suggest that we don’t need more art history degrees. Can you imagine the head of a European state marginalizing art history? It would never happen. For cultivating an aesthetic sensibility is the pinnacle of human attainment for them.

Americans seem to act as if culture — like the market — will take care of itself. But neither of those claims is true. Both markets and cultures require rich societal soils in which to thrive. And while our marketplaces are thriving like never before, our culture has sunk so low that it has finally propelled us into the most embarrassing and toxic presidential election year in modern American history. It is now possible for a gaudy reality-show huckster to win a major political party nomination for president on a jingoistic authoritarian platform. And to do it without having to raise any funds whatsoever. For our ad-driven media are all-too ready and willing to provide him with the steady stream of free coverage demanded by countless hungry eyes and empty heads eager to consume news as spectacle.

Our president’s callous remarks about art and history betray a longstanding American contempt for culture itself. The French language actually has an adjective for this attitude: inculte. Although the common English translation is “uncultivated” it really means uncultured — that is, a lack of awareness, instruction, or interest in culture. Collectively, it amounts to an absolution of civic responsibility to preserve the ideals of a culture at the institutional level. This, I am convinced, is the root cause of our current malaise. American anti-intellectualism is nothing new. But the situation has gotten so bad of late that the symptoms should be undeniable to anyone with half a brain. Practically every time you turn on the television, go to the movies, or glance at one of the few remaining newsstands or bookshop windows, there it is, yawning out at you: Garbage culture. Great gleaming gobs of it. So what, if anything, can be done about it?

Almost every other great nation takes care to cultivate certain traditional values in its people. It does this in myriad ways, one of which is through government offices charged with doing exactly that. A glaring example is that they each have a presidential cabinet position devoted to it. It’s usually simply called the ministry of culture and charged with promoting the arts and funding public education campaigns on important issues of public concern. Unfortunately, we have nothing like this here, which is quite telling. What would happen if Hillary Clinton promised to create a new Secretary of Culture cabinet position? Imagine the kind of push-back she would get. We would hear countless sneers of scorn along the lines of “how dare the government try to tell us what kind of country this is??”

And yet, there is already a variety of ways that our government deliberately shapes culture — via the National Endowment for the Arts (NEA), the Smithsonian, and The Corporation for Public Broadcasting (CPB). The president himself will at times remind us of the core values we stand for. Obama just did so in his June 14 speech on the Orlando shootings. He very eloquently pointed out that the rich diversity of race, religion, and gender that we possess in this nation of immigrants is perhaps our greatest source of strength. It’s also true that the multiculturalism this creates can make defining our common culture somewhat more challenging than it might be in other nations. Still, we often manage to come together when it really matters. And let’s not forget those wonderful Ken Burns documentaries on the American experience.

But we need much more. We need public education campaigns on core American values like trustworthiness, the spirit of fair play, and the importance of critical independent thought. A secretary of culture cabinet position could help restore our appreciation of the utility of a solid liberal arts education and disseminate crucial information on pressing issues of social inequity and environmental conservation. Europeans on the whole are already on board with this. Americans however, are barely even sure that global warming is a problem. Every one of our great European allies, plus Australia, Canada, and Japan has a cabinet-level secretary of culture. They all recognize that maintaining a rich and vibrant culture is key to protecting the future of any great democratic republic.

Many will no-doubt be hesitant to create a new potentially wasteful government agency. However, spending one billion dollars a year on culture and the arts is arguably more beneficial than leaving it in the trillion dollar defense budget to design another fighter jet. If we really want to keep the government from wasting money, the answer isn’t to starve it of funds. It is for us to participate more in our democracy. That is, we have to pay attention to what our elected officials do with our money and hold their feet to the fire so that they spend it effectively. But to do that, we need to restore our people’s flagging interest in participatory democracy itself. That’s why we ultimately need something like a department of culture — to rekindle the very civic values required to regain it. We could start by requiring that all public schools provide significant training in civics and the arts. And we would accomplish that not by hiring more bureaucrats with business degrees but by hiring qualified historians, musicologists, educators, and yes, art historians.

Having neglected culture far too long, Americans must now face the music of what promises to be the most relentlessly embarrassing general election season in our nation’s history. As Winston Churchill famously said: “You can always count on Americans to do the right thing — after they’ve tried everything else.” Let’s hope he was right.

Julian Friedland teaches philosophy at the University of Hartford and is the author of American Steam, a satirical novel on the culture of narcissism, set on a college campus.