Although young people have long been hailed as more open-minded and politically tolerant than their parents and grandparents, there is evidence that this is no longer the case (see How Marcuse Made Todays Students Less Tolerant).  The problem of political intolerance is clearly demonstrated on college campuses in recent months, as student groups clash over issues of immigration, race, and even support for presidential candidates.  While debate and protests can be healthy displays of free expression, many of these efforts seem aimed at shutting down unpopular speech or punishing people with offensive viewpoints. In the past several months, scholars at Heterodox Academy have collectively made a compelling case that free speech at America’s colleges and universities does not enjoy the protected, valued status that a “marketplace of ideas” would demand.

In January 2016, the American Council of Trustees and Alumni (ACTA) issued a report identifying another problem inflicting college students: political and civil knowledge appears to have declined for this generation as well.  The report, titled A Crisis in Civic Education, argues that few college students are required to take basic courses in American history or government, and that they score low on measures of civic knowledge.  For example, ACTA’s survey of over 1,100 liberal arts colleges reveals that only 18% require students to take a course in American government or American history.  Accordingly, the report finds that college graduates lack basic knowledge of American government.  For example, more than half of college graduates don’t know how a constitutional amendment is ratified and 40% don’t know that Congress has the power to declare war.  Almost half of college graduates can’t properly identify the terms of office for members of Congress.

I argue that these two issues are related and that declines in civic awareness and political knowledge contribute to political intolerance.

The marketplace of ideas is premised on the notion that when people exchange competing ideas, they assign value to those with the most intellectual merit and discard those without merit.  However, in order to trust that this process will advance one’s own political values, one must both believe that one’s ideas are most meritorious, and also have some confidence in one’s ability to promote and defend those values to others.  In other words, participation in a free marketplace of ideas requires a certain level of confidence in one’s own political acumen.

There is already evidence that political expertise leads to greater tolerance.  As acrimonious as political dialog is in Washington, political elites have historically shown high levels of support for democratic norms and exercise considerable tolerance compared to the masses.  While they may not engage in polite discourse, elites are nonetheless protective of discourse.

On the contrary, what we see on college campuses are student demands for intellectual trade protection.  I argue that protectionism of ideas, like protectionism of goods, is based in insecurity and accomplished through restrictive practices.  Certain ideas may be embargoed, prohibited from entering the marketplace at all through speech codes and student conduct policies.  Other ideas exact a social tariff, such that the psychological cost of exchanging them discourages trade.  And of course, students are demanding that universities implement their own form of import quotas, placing restrictions on outside speakers and even professors who would shift the balance of ideas away from the Left.

While there are several possible theoretical explanations for this behavior, previous research connects political intolerance to psychological insecurity.  Insecure people more easily see others as a threat and perception of threat is a consistent predictor of political intolerance.  Similarly, a lack of political understanding may lead to intellectual insecurity, as people lose confidence in their ability to market and defend their ideas.  Evidence from the General Social Survey supports this theory.

The figure below is based on the GSS data from 2012.  Respondents were asked whether they would allow members of six controversial groups (communists, racists, militarists, homosexuals, atheists, and radical Muslim clergymen) to speak in public, teach college, or have a book they authored on loan in the public library.  The combination of six groups and three prohibited acts creates an intolerance scale ranging from 0 to 18.   Someone who scores a 0 would allow members of all groups to do all three activities, while someone who scores 18 would prohibit members of all groups from all activities.   The x-axis is a measure of one’s agreement with the statement, “I think most people are better informed about politics and government than I am.”  On a scale of 1-5, a higher number indicates greater confidence in one’s own political knowledge. 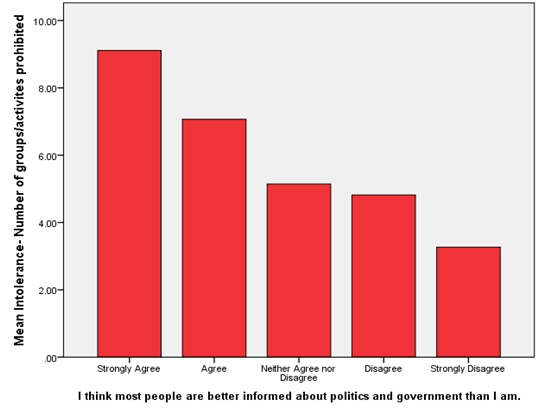 In fact, this particular measure of efficacy (one’s assessment of one’s political knowledge relative to others) is consistently one of the strongest predictors of political intolerance no matter which other variables are included in a statistical model.

For example, while there is a significant relationship between education levels and political tolerance, controlling for education does not change the relationship between tolerance and efficacy.  In the figure below, the blue line represents individuals who have no college education, while the green line represents those with junior college or higher levels of education.  People who go to college are more tolerant than those who do not.  However, even among more educated people, confidence in one’s political knowledge increases tolerance.  In other words, students who come out of college with confidence that they understand government will be more tolerant than those who lack such confidence.  This seems to support ACTA’s claim that declining emphasis on civic knowledge in higher education will have negative impacts on civic life. 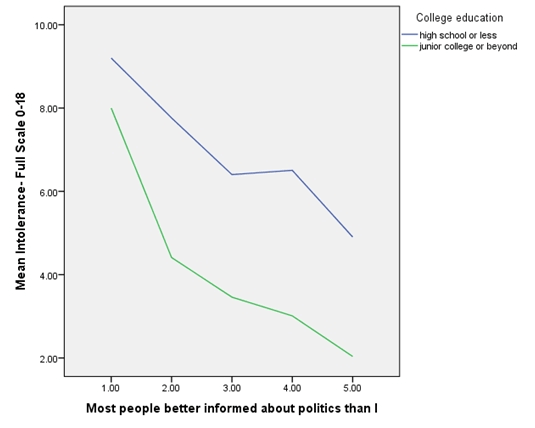 Similarly, the relationship between political confidence and tolerance does not vary significantly by self-reported ideology.  Although the terms “liberal” and “conservative” are imperfect measures of ideology, for the reasons that some of my colleagues at Heterodox Academy have noted, these are the terms that the GSS uses and thus are the best measures available for this data.  Based on these terms, there is no relationship between ideology and tolerance.  Yet, for both liberals and conservatives, greater confidence in one’s political knowledge does predict greater tolerance, as shown in the figure below. 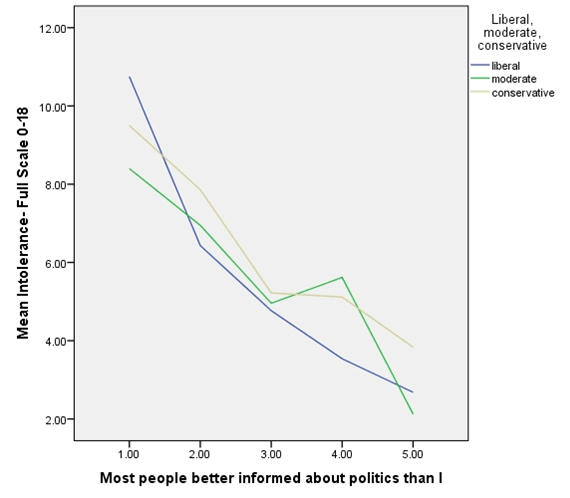 While ideology does not predict tolerance or political confidence, in my previous post I referenced a relationship between political tolerance and a social justice orientation, measured by the belief that the government should do more to help blacks and the poor to get ahead.  Those who are more inclined to social justice are less politically tolerant than others, at least among younger people.  This relationship still holds but appears to work partially through political confidence, as the two variables are correlated.  Those who have a stronger social justice orientation are also less confident in their own political knowledge (Pearson’s R = -.171, p.< .01).

In summary, the data indicates that political tolerance is exercised more frequently by those who believe they are equipped with the information needed to defend their ideas.  As brash and bold as students may be when demanding limits on expression, there is a world of difference between being confident in the righteousness of one’s position and being confident that one can defend and justify that position through reasoned debate.  The impulse to silence others rather than debate them is correlated with intellectual insecurity.

Thus, colleges and universities can promote the free exchange of ideas not only by removing trade barriers (restrictions on speech) but also by providing students with ideas worth trading and the confidence to engage in the vulnerable process of defending them.   If students are silencing others because they lack the skills and confidence to defend their own ideas, civic education may be a key to creating intellectual free trade zones.

April Kelly-Woessner is Professor of Political Science and Chair of the Department of Politics, Philosophy and Legal Studies at Elizabethtown College.

This article was originally published at the Heterodox Academy. Read the original article here.

April Kelly-Woessner is Professor of Political Science and Chair of the Department of Politics, Philosophy and Legal Studies at Elizabethtown College.

In recent months, a sense has emerged that the tide might finally be starting to turn in the gender debate: Things that most everyone believes to be true, but that no one has been allowed to say, are now increasingly being said by writers, lawmakers, and litigants. Certainly, the battle