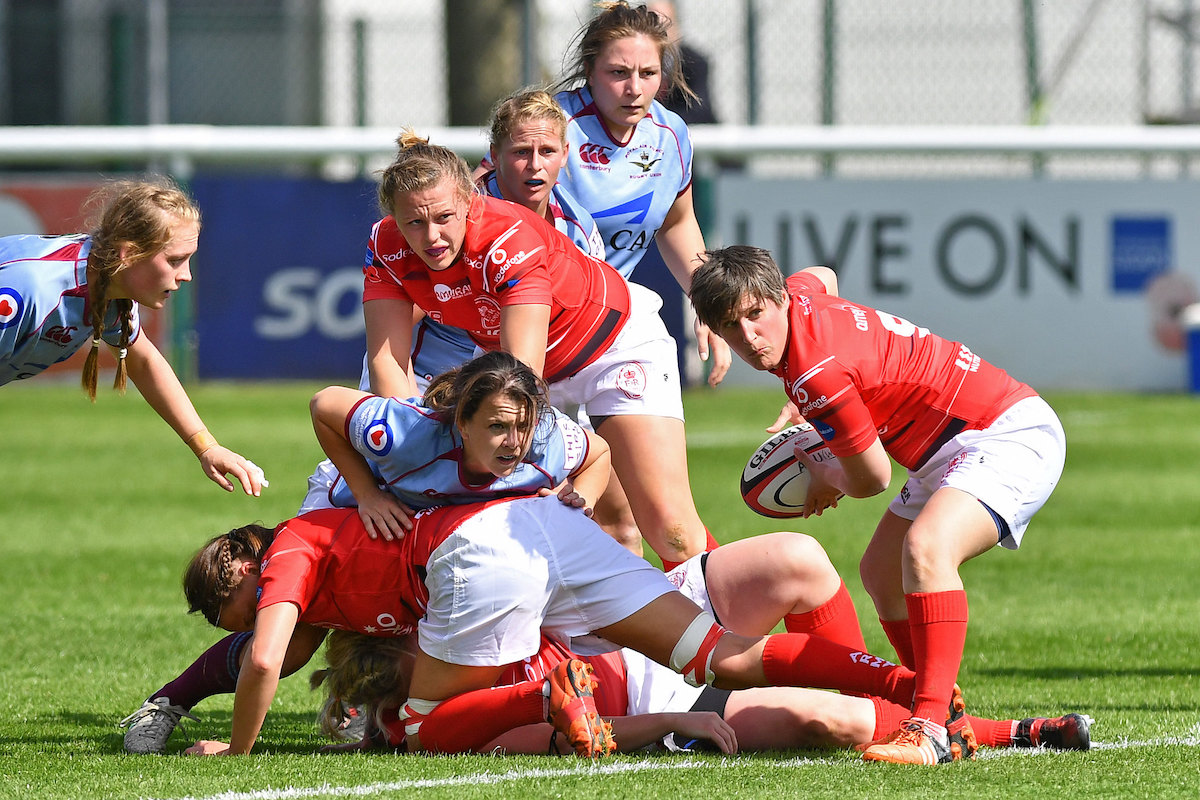 From November 2015 until February 2020, World Rugby, rugby’s global governing body, incorporated guidelines established by the International Olympic Committee (IOC) on transgender participation in sports. According to these rules, males who wish to self-identify into women’s rugby could do so if they committed to reducing their testosterone levels to 10 nmol per liter or lower for at least 12 months. (The average level for men is about seven times that level.)

During this period, instances of biological males playing in the women’s game increased, and some participants began to express alarm. One rugby referee posted on the website Fair Play for Women, for instance, that “being forced to prioritize hurt feelings over broken bones exposes me to personal litigation from female players who have been harmed by players who are biologically male. This is driving female players and referees out of the game.” Another wrote, “I volunteer my time to officiate matches because I love my sport. But I won’t continue much longer if I have stay quiet about the unfairness I see on the pitch or risk abuse by getting called transphobic if I turned a player away.” A chairperson of one UK rugby club expressed shock upon discovering that, as she reported, “If anyone suspects someone on the opposing team might have an advantage because they are transgender, ‘they must not ask.’ They must simply accept that all teams will be ‘complying with the rules.’”

In some cases, female rugby players and their coaches would show up to matches to discover that there was a biologically male athlete playing on the opposing team. As one player put it, “I have to play or forfeit my place even when I know it’s unsafe for me.” Those who enjoyed the advantage of having a trans-identifying player on their team, on the other hand, were sometimes found to be lacking in sympathy. On one occasion, a team captain was quoted as saying that their male-bodied player had “folded an opponent like a deck chair.”

With worries mounting about safety—especially concussions—and financial liability, World Rugby undertook a review of its transgender policy in February 2020. This might seem to be a common-sense step. Yet among global sports federations, it was actually seen as a ground-breaking moment. World Rugby turned out be the first sport to bring to the table experts on all sides of the eligibility issue, including sociologists, biologists, kinesiologists (my own specialty), and those with a background in human rights. The consultation is reported to have been respectful and thorough. All relevant opinions were heard.

The dominant view that emerged from this summit was that World Rugby would have to amend its policy. It was simply too risky to continue to allow male bodies into the women’s game. The decision-makers relied on data that had been published by the renowned Karolinska Institute (Sweden) in September 2019. Even after a full year of hormonal reduction in accordance with IOC guidelines, the researchers concluded, there was no appreciable loss of mass, muscle mass, or strength in transitioning males. In physical terms, it was just a man playing with women.

World Rugby had to come to terms with reality: Irrespective of hormonal intervention, male athletes are, on average, 40 percent heavier, 15 percent faster, 30 percent more powerful, and 25–50 percent stronger than their female counterparts. And these differences pose obvious risks for female players in full-contact rugby. World Rugby’s new policy document has not yet been made public. But according to those who’ve seen it (and the various media leaks), the organization is proposing a comprehensive ban on biological men in the women’s sport—though these recommendations won’t become official policy until they are reviewed and voted upon by the World Rugby Council later this year.

Women’s rugby isn’t a particularly popular mass-participation sport. But because World Rugby’s proposal, if enacted, would represent one of the first big cracks in the dam for those who insist trans-identified males should be allowed to compete with women, the case has attracted plenty of lobbying. The Canadian Women’s Sex-Based Rights group (CaWsbar), for instance, sent a letter to CEO Brett Gosper, thanking World Rugby for becoming “the first world sports federation to have undertaken a thorough and balanced review of the 2015 International Olympics Committee consensus.” Social-media commentary has been abundant. Even my own little August 20th tweet urging readers to send their appreciation to World Rugby generated (what was for me) unprecedented public support (and, notably, scant pushback).

Activist groups opposed to any reconsideration of the IOC’s rules, on the other hand, put out statements—many of them picked up by the press—with headlines suggesting that World Rugby was implementing a “ban” on trans athletes. In fact, no one would be “banned” under the proposal. Athletes would simply be required to compete with athletes of their own sex, as had been the case in rugby, and numerous other sports, until very recently.

Some observers may be tempted to conflate World Rugby’s proposal with the controversy surrounding elite runner Caster Semenya, which was the subject of a recent decision by Switzerland’s Federal Supreme Court. Under World Athletics guidelines introduced in 2019, which were subsequently upheld by the Court of Arbitration for Sport, Semenya would be allowed to compete in long-distance running events only if she agreed to take testosterone-reducing drugs, a condition that Semenya opposes. But that case is distinct, because Semenya is one of a small number of people who exhibit differences of sexual development (DSD)—“a group of congenital conditions associated with atypical development of internal and external genital structures,” as experts define it. The trans rugby players who seek to participate in women’s leagues, on the other hand, are simply biological males who have changed their pronouns and social identity.

Nevertheless, both situations highlight the tension that exists between biological determinants and human-rights claims when it comes to access to women’s sports. And in both cases, there are at least two clear lessons: (1) sports federations should assert their authority to set their own eligibility guidelines; and (2) the sooner a governing body asserts such boundaries, the better. Once opportunists have taken advantage of a lax regulatory regime, they will do everything in their power to resist change. And they will have the media on their side, because they will be able to present themselves as victims.

A decade ago, prevarication and a lack of corporate discipline by World Athletics—then known as the International Amateur Athletic Federation (IAAF)—resulted in a decade of unnecessary upheaval in the sport of athletics (which includes a broad range of pursuits, including track and field). Semenya had only recently broken onto the scene as a junior athlete, and already had demonstrated performance levels that were raising eyebrows. After failing to make the 800m finals at the 2008 World Junior Championships (with a time slower than 2:04), Semenya finished the 2009 season as reigning World Champion in the senior women’s division, with a time that was almost nine seconds faster. This kind of quantum-leap improvement isn’t normal, and the IAAF had no choice but to investigate.

Notoriously, this included a humiliating sex-verification test. It was supposed to be private, but somehow the information leaked. In the ensuing uproar, the IAAF chose to clear Semenya in 2010 without really dealing coherently with the results of the test. In one statement, it was announced that, “The IAAF accepts the conclusion of a panel of medical experts that she can compete with immediate effect.” In another, the general secretary said: “She is a woman but maybe not 100 percent.” Needless to say, this sort of comment set off lurid speculation about Semenya’s biology. So while Semenya continued to run, accumulate accolades, and win races, there was a cloud of suspicion that affected spectators and fellow runners. This is exactly the sort of protracted and degrading process that World Rugby can avoid by acting decisively.

What saddens me as a Canadian, someone who has long worked within the sports sector as both coach and provincial sport-association president, is the official response from Rugby Canada, which I had hoped would have endorsed the commitment made by World Rugby to “work with relevant groups to explore appropriate participation pathways for transgender athletes.” Placing male athletes in with female players for full-contact rugby isn’t the only option available for trans rugby players. There could very well be safer alternatives, if organizations such as Rugby Canada were interested in exploring them.

Instead, Rugby Canada used its voice to channel the opinions of one-note gender activists. Its official statement, released in early September, declared that the proposed new World Rugby rules “are not policy that can or will be adopted should they move forward.” Rugby participation in Canada, the organization said, would continue to be guided by the existing Trans Inclusion Policy, which states that players “should be able to participate as the gender with which they identify and not be subject to requirements for disclosure of personal information beyond those required of cisgender athletes. Nor should there be any requirement for hormonal therapy or surgery.” That’s right: The policy is pure, no-questions-asked self-identification. The only reference to safety in the entire document relates to the suggestion that someone might not feel “safe” if his “gender identity and gender expression” weren’t respected.

It seems to me that Rugby Canada can ill afford to posture against biological reality. It was only two years ago that a young man named Brodie McCarthy died as a result of a head injury suffered in a rugby tournament. Five years before that, it was a women’s team captain, Rowan Stringer, a 17-year-old from Ottawa, who died from a blow to the head during a game. In response, Ontario passed Rowan’s Law, requiring all youth sports, whether at the club or school level, to observe strict safety protocols pertaining to head injury and concussions. Canada’s federal government extended the movement nationally by developing its own public health advisory on the dangers of concussion. The advisory specifically identifies rugby as one of three especially dangerous sports: “Ice hockey, rugby and ringette are the sports with the highest proportion of brain injuries among children and youth 5–19 years of age, ranging from 27 percent to 44 percent of all injuries that happened while playing these sports.” Now imagine how much more dangerous it is for women who face men on the rugby pitch.

This month, British trans activist groups have been scrambling to update their policies to accord with new British government rules that prohibit schools from using materials that encourage children to question whether they are in the “wrong body.” These groups are doing this because failing to do so will now have legal and financial implications. Gender clinics, moreover, are now starting to get sued for recklessly transitioning children on the basis of flimsy or non-existing health science. And rightly so: Those who put women, children, and other vulnerable populations at risk for ideological reasons must face the legal consequences. One can only hope that Rugby Canada, and its counterparts all over the world, come to understand this before someone gets hurt—or goes bankrupt.