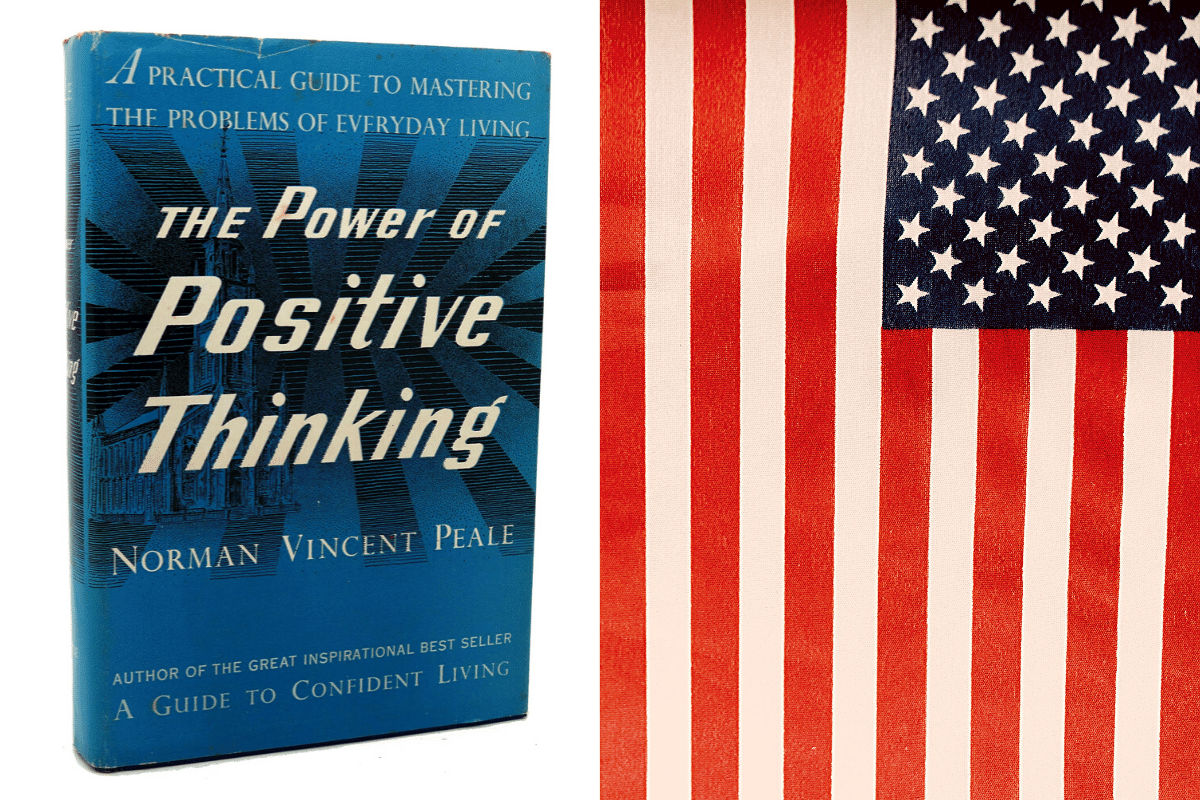 The COVID-19 pandemic has left many Americans with a lot of time to think about how we’ve arrived at this calamitous national juncture. One question it raises is whether our national addiction to looking on the bright side has prevented us from dealing with the continuing hardship this situation entails?

Between Donald Trump’s miracle-cure claims and the press impatiently hounding Anthony Fauci about how much more lockdown we’ll have to endure, one can observe the durable spirit of American optimism—the conviction that life, far from being a vale of tears, is fated to get better and better, if only we roll up our sleeves and keep smiling. It’s been bred into our bones by pop culture, ratified by the Constitution, symbolized by the Statue of Liberty, and mythologized (falsely) though Horatio Alger. It’s a secular religion with many sects and preachers, few as influential as Norman Vincent Peale.

Dubbed “God’s Salesman,” Peale (1898-1993) was the author of The Power of Positive Thinking, which first appeared in 1952 and went on to sell more than five million copies. He was also head pastor at the Marble Collegiate Church in Manhattan, where a young Donald Trump prayed with his family and drank in Peale’s sermons trumpeting the value of determination. In a 2009 interview published in Psychology Today, Trump said that he’d read Peale’s book, and that it helped him overcome life’s obstacles. Peale’s influence and writing style (“Believe in yourself! Have faith in your abilities!”) may even help explain Trump’s use of forceful, hyperbolic mantras to describe his “spectacular” and “amazing” project to restore American “greatness.”

A philosophy of optimism was central to the flourishing of the American project. But it’s also useful to consider whether insisting that success and greatness lie around every corner can become a maladaptive response to problems that are complex and brutal. Robert Lowell famously quipped that “the light at the end of the tunnel is the light of the oncoming train.” But the opposite of febrile optimism isn’t necessarily pessimism per se, nor is it the nightmarish apocalypticism that Trump uses to describe the agenda of his enemies. Rather, the opposite of rosy thinking is a resolute and grinding realism, which is sometimes a necessary outlook, but one that Americans have trouble collectively embracing.

It’s telling that one of Trump’s first instincts in the face of COVID-19 was to insist that we’d all be back in shopping malls by Easter. That was more than a month ago. Yet his promises of instant relief—chloroquine, sunlight, humidity, disinfectant—have only gotten more manic. This virus isn’t going to disappear any time soon, and things probably aren’t going back to the way they were before—perhaps not ever—however much “positive thinking” we apply.

This isn’t just about Trump; American optimism has always had its downsides. Theodore Roosevelt was widely admired for his energy and dynamism, whether he was running a cattle ranch in the badlands or prosecuting the Spanish-American War as a cavalry leader with the Rough Riders. His cockeyed sense of gung-ho—“Oh, but we had a bully fight,” he quipped after a battle—no doubt served to boost morale. But it also betrayed evidence of a childish streak. One British diplomat, Cecil Spring Rice, advised others, “you must always remember that the president is about six.”

The etymology of the word “optimism” runs through 17th-century German polymath Gottfried Wilhelm Leibniz, who sought to explain the presence of evil in a world created by a benevolent God—the age-old Christian project of theodicy. Leibniz gave us the phrase “the best of all possible worlds” (“die beste aller möglichen welten”), which would survive in inverted, satirical form thanks to its inclusion in Voltaire’s Candide. That book was written in the shadow of such tragedies as the 1755 Lisbon earthquake, which, like COVID-19, made grim mockery of optimist conceits.

In regard to individual mental health, modern studies suggest that optimists tend to be more resilient and exhibit stronger coping strategies, just as Peale believed. But as recent events show, when optimism is indulged as a dogmatic national ethos, it can lapse into a sort of cult, leading to grandiose delusions. Realists, meanwhile, are denounced as morbid, or even unpatriotic. As social critic Barbara Ehrenreich argued in her book Brightsided: How Positive Thinking is Undermining America, the “tyranny of positive thinking” and America’s “reckless optimism” have laid the groundwork for all sorts of tragic overreach.

In Civilization and its Discontents, Sigmund Freud, one of the great cultural pessimists of all time, described man as homo homini lupus—“wolf to another man.” When German pacifist Arnold Zweig wrote to Freud to say he had “discovered, and derived a certain consolation from the discovery, that the explanation of the pile of ruins on which we and the dictators now live like rats, is to be found in your work,” Freud replied: “I cannot imagine what ‘consoling explanations’ you have discovered in my [book].” The letter is dated March 5th, 1939. As we now know, the year’s events would yield scant basis for consolation.

But if the “power of positive thinking” has become a dynamo for fantasists, what is the answer for the rest of us? I am certainly not suggesting that we throw up our hands in a spirit of defeatism. But to the extent optimism is useful, it is the cautious variety advocated by New York Governor Andrew Cuomo—nourishing itself on signs of a flattening curve, the courage of our medical workers, the kindness of strangers, and widespread gestures of solidarity.

What we need more of is hope, a stubborn and necessary quality that has survived much worse than COVID-19. Unlike public displays of optimism, inwardly experienced hope doesn’t push quack medicine on gullible seniors, or offer deluded forecasts of imminent normalcy. It plays the long game, in other words—a project for which many American optimists now seem emotionally unequipped.

Daphne Merkin is an American literary critic, essayist, and novelist.