In 1787, two years before he was elected vice president of the United States—a role in which he served until 1796, when he was elected president—John Adams completed a massive multivolume treatise titled A Defence of the Constitutions of Government of the United States. He supplemented it with a further series of essays later published in 1805 as Discourses on Davila.

When the Discourses were written, America was seized with the question of how to view the French Revolution. On one side were those who enthusiastically endorsed its egalitarian principles and wished to see them extended to the United States. Thomas Jefferson was their champion.

On the other were those opposed to the leveling demands of the French Revolution. In their view, these represented a dangerous species of lawlessness. Against it they defended the values of tradition and hierarchy. In Europe, their most forceful spokesman was Edmund Burke. On this side of the Atlantic it was John Adams, who is sometimes called America’s Burke.

The Discourses on Davila cover a great deal of ground in a wandering style. But there can be no doubt regarding Adams’ central message. It is that human beings are driven by what he calls “the passion for distinction”; that distinction is a fact of life with many different sources, including beauty, brains, upbringing and wealth; that the love of distinction is not objectionable in itself but dangerous if it gets out of hand; and that a principal function of government is to ameliorate the competition for honor and recognition in a way that preserves its good effects while suppressing its bad ones. To this end, Adams urges the advantages of a “mixed” government that contains elements of monarchy, aristocracy and democracy over those that are devoted to one of these exclusively.

According to Adams, human beings have a natural “affection for the good of others; but alone it is not a balance for the selfish affections.” To the passion for “benevolence,” nature “has kindly added…the desire of reputation, in order to make us good members of society.” Together these two passions counterbalance the drive for “self-preservation,” which, left to itself, results in anarchy and ruin. But that is only if the second—the longing for distinction—is suitably directed toward a productive end. At its root, this longing is the desire not to be “out of the sight of others, groping in the dark.” It is the desire to be “seen.” A man can escape from obscurity through bad deeds as well as good ones. If the passion for recognition is to strengthen rather than dissolve the bonds of social life, it must therefore be welded to genuine “merit.”

Wealth and a family name bring distinction. Depending on the circumstances, it may be an honorable one. The same is true of “beauty, elegance, and grace.” Adams does not discount any of these as sharply as some do. But the only enduringly good reputation, he says, is one based on “intellectual and moral qualities.” Citing a long line of philosophers reaching back to the Greeks and Romans, Adams calls virtue “the only rational source and eternal foundation of honor.” It is the only truly reliable basis of distinction.

“There is a voice within us, which seems to intimate, that real merit should govern the world,” Adams writes. But this raises an obvious question: “How shall the men of merit be discovered?”

The problem is twofold.

On the one hand, “real merit is confined to a very few.” But the people at large cannot be trusted to make the selection. They are subject to “intrigues and maneuvers.” They also are subject to the most seductive “deception” of all: the argument that “real” merit is a pretense, a device for shielding the privileges of the rich and wellborn, and that no man possesses more of it than any other.

This is the doctrine of “levelling.” It is what “the self-styled philosophers of the French Revolution” teach. But their teaching runs counter to nature. While “every man and woman” has “equal rights,” nature assures that some possess a degree of virtue others lack. For those who are less distinguished, this is a hard truth to accept. It is a source of envy and jealousy. And it makes them vulnerable to demagogues who preach the perfect equality of all human beings.

On the other hand, if the best are defined by an identifiable marker, like wealth, title or the possession of land, the problem of selection is solved, but there is no guarantee that those who possess these attributes will be individuals of “real merit.” In aristocracies, a gap eventually appears between the outward signs of aristocratic bearing and the true virtue of those who exhibit them. The divergence between the two is a perennial source of democratic opposition to all fixed orders of rank and privilege.

Adams grants that children born to privilege, with a family name to uphold, may be more likely than those in obscure circumstances to acquire a virtuous character. But their privilege is no guarantee. Many become vicious instead. Nature itself—a “voice within”—tells us that the best men ought to “govern the world.” But Adams vehemently rejects the idea that the problem of selecting them can be solved by adopting any European form of nobility. None, in any case, could grow in America’s egalitarian soil. Yet, if this solution is no good, the problem still remains, and must be solved in some fashion if we are not to descend to the unnatural and destructive equality proclaimed by the champions of the French Revolution.

Adams’s solution is a negative one. There is no way of guaranteeing that “power,” as distinct from “rights,” will be concentrated in the right hands. But if power is dispersed, that can at least help to prevent its concentration in the wrong hands—in particular, those who constitute only a “mob.” In Adams’s view, this is the principal function of America’s constitutional government, which divides one power from another through a system of checks and balances.

But a further question remains. Where are the men—and, today, women—of real merit that our form of government allows to come to the fore? They constitute a “natural” aristocracy, as Adams repeatedly says. An aristocracy of this sort differs from the artificial one constituted by lineage. But how is it formed and sustained? Natural aristocrats are known by their character and works, not their names.

John Adams was a vain man. His idea of how to build and support a natural aristocracy was based on his own experience and achievements. Some may carp, but America has had few models so good. In material terms, he came from modest but honorable beginnings. His family was neither rich nor poor. It was at Harvard College that Adams first began to study, in a disciplined way, the works that were to have a profound effect on his views about political life.

An education of the sort Adams received requires leisure. This inevitably gives it an aristocratic tenor, since “leisure for study must ever be the portion of the few.” It follows that “the laboring part of the people can never be learned.” Adams concludes that “knowledge will forever be monopolized by the aristocracy.” Indeed, “the moment you give knowledge to a democrat,” he declares rather extravagantly, “you make him an aristocrat.”

Hence, Adams says, “the more you educate, without a balance in the government, the more aristocratical will the people and the government be. There can never be, in any nation, more than one fifth—no, not one tenth of the men, regularly educated to science and letters.” An education of this sort gives its possessors “no peculiar rights in society.” But it deepens their understanding of human nature and political strife. This justifies our giving their more learned views a special “weight.” It confers a “distinction” and “privilege” upon them.

“There is no necessary connection,” Adams concedes, “between knowledge and virtue.” But Adams remarks that in his “humble opinion,” “knowledge, upon the whole, promotes virtue and happiness.” And the intellectual process of learning tends to encourage those affective qualities of moderation, decency and fairmindedness in which a virtuous character at least partly consists. 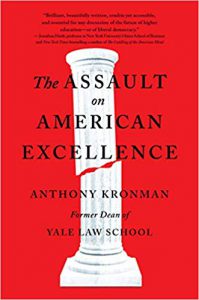 Anthony Townsend Kronman is a Sterling Professor at Yale Law School. This essay is adapted, with permission, from The Assault on American Excellence, published by Free Press, 2019.