If you count yourself among the secularists cheering for the demise of religion, it isn’t hard to find comforting statistics. Nearly every survey of the state of religion in my own country, the United States, presents a similar picture of faith in decline. Compared to their parents and grandparents, Americans are less likely to self-identify as religious, attend religious services, or engage in religious practices such as daily prayer. Full-blown atheism is still a minority position. But the ranks of the “non-religious”—a broad category made up of those who reject traditional conceptions of God and religious doctrines, or who express uncertainty about their beliefs—are growing.

Even those who self-identify as Christians are less inclined to talk publicly about God and their faith than their predecessors. Indeed, many Americans are Christian in name only—using the term more as an indicator of their cultural background than as a declaration of a spiritual life committed to the teachings of Christ. And the rest of the Western world is even farther ahead on this same path.

But secularism advocates should pause before celebrating such trends. A deeper investigation into the religious nature of our species casts doubt on the view that science-centered secular culture can succeed without a space for the sacred.

Scholars have proposed a wide range of theories to explain the persistence of religious faith in all human societies. Many of these theories involve a heavy dose of what may be described as “blank slate” thinking—by which human interests and beliefs are shaped entirely by social influence. Yet such top-down, culturally-driven explanations ignore the possibility that religious faith originates in bottom-up brain-driven cognitive and motivational processes.

Implicit in the blank-slate take on religion is the idea that religious faith may be diminished simply by changing the type of cultural inputs people receive. This would seem to be supported by the gradual replacement of religious doctrines with rationalist, evidence-based methods for explaining the world: The history of science is full of examples of science replacing old superstitions. But explaining the natural world is only one of religion’s functions. Ultimately, religion is about the human need for meaning. This need is inherent, not learned. It is a fundamental component of the human condition.

Indeed, the degree to which humans perceive their lives as meaningful correlates reliably with observable measures of psychological and physical health. A sense of meaning also helps people mobilize toward the pursuit of their goals (persistence), and serves to protect them from the negative effects of stress and trauma (resilience). In short, people who view their lives as full of meaning are more likely to thrive than those who don’t. 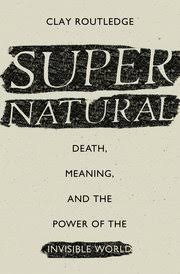 When people turn away from one source of meaning, such as religion, they don’t abandon the search for meaning altogether. They simply look for it in different forms. As I discuss in my new book, Supernatural: Death, Meaning and the Power of Invisible World, the decline of traditional religion has been accompanied by a rise in a diverse range of supernatural, paranormal and related beliefs.

Nearly one third of Americans report having felt in contact with someone who has died, feel that they have been in the presence of a ghost, and believe ghosts can interact with and harm humans. These numbers are going up, not down, as more people seek something to fill the religion-shaped hole in their lives. By no coincidence, infrequent church attendees are roughly twice as likely to believe in ghosts as regular churchgoers.

Americans are abandoning the pews, but are increasingly fascinated by astrology, “spiritual” healing practices, and fringe media sources that purport to describe the powers of the supernatural realm. The number of claimed “haunted houses” in the United States is growing. And paranormal tourism centered on such allegedly haunted locales has become a booming business, now accounting for over half a billion dollars in revenue annually.

This trend can be observed on the basis of age cohort: Young adults, being less religious, are more inclined to believe in ghosts, astrology, clairvoyance and spiritual energy. But it also can be observed geographically: The parts of the United States where secular liberals are predominant tend to be the same areas where the market for alternative spiritual experiences and products is most lucrative. Even prominent media outlets such as The New York Times and (in Britain) The Guardian, whose readership consists primarily of secular liberals, frequently publish articles about topics such as witchcraft and astrology—even if they are careful not to legitimize the claims made by proponents of these beliefs.

Polls in Canada and Europe reveal similar patterns. For example, surveys indicate that an increasing number of people in the United Kingdom believe in ghosts; over 50% today, compared to about 40% a decade ago. A survey of Canadian adults found that though Millennials were less likely than older adults to believe in God and Jesus Christ as the son of God, they are equally likely to believe in heaven, and more likely to believe in hell (as well as a range of other supernatural ideas—including the idea that humans can communicate with the spiritual realm).

Some who reject both traditional and non-traditional supernatural beliefs are attracted to what I refer to as “supernatural-lite.” This label encompasses beliefs that require a leap of faith and have characteristics reminiscent of religion, but do not explicitly rely on the idea of supernatural power. And they often are superficially wrapped up in scientific or technological conceits, which make them more palatable to those who do not fancy themselves people of faith (especially men). This includes the belief that intellectually superior aliens are monitoring and even influencing, the lives of humans. Some of these believers have even embraced the idea that extraterrestrials are responsible for human civilization, and will one day welcome us into a larger cosmic community once we reach some baseline level of enlightenment.

In his 2011 book, The Believing Brain, Michael Shermer argues that alien beings are “secular gods—deities for atheists.” And while most hardcore atheists aren’t dedicated UFO conspiracy theorists, the dream of life amid a larger interplanetary community reflects the hunger for collective human meaning that transcends the pedestrian scientific view of human beings as transient organisms inhabiting an inconsequential rock hurtling through an indifferent universe. As with the other patterns described, across the Western world, at the same time as traditional religions are declining, supernatural-lite beliefs are on the rise.

Another doctrine lying within this borderland between science fiction and religion is transhumanism, whose adherents dream of transcending mortality through medicine and bioengineering. The scope of transhumanism ranges from the relatively humble goal of defeating specific terminal diseases such as cancer, to the more ambitious goal of transferring human consciousness to a machine body or uploading it into a supercomputer that would allow people to live indefinitely in cyberspace. Even though many transhumanists do not subscribe to traditional religious beliefs, such beliefs are finding their way into transhumanism. For example, there is a growing Christian transhumanism movement and a Mormon Transhumanist Association.

And if you imagine that secular ideologies and political movements now seem to exhibit faux-religious characteristics, you aren’t alone. “We have the cult of Trump on the right, a demigod who, among his worshippers, can do no wrong,” wrote Andrew Sullivan recently in New York magazine. “And we have the cult of social justice on the left, a religion whose followers show the same zeal as any born-again Evangelical. They are filling the void that Christianity once owned, without any of the wisdom and culture and restraint that Christianity once provided.”

Some critics have responded to Sullivan’s essay by pointing out that politics and religion have mixed in many ways throughout history. This is true but doesn’t undercut Sullivan’s religious-substitution argument. The more people abandon religious spaces to meet existential needs, the more likely they are to turn to extreme political tribalism, and to blur the lines between spiritual and secular pursuits. Indeed, studies find that it is people who score low on commitment to a religious faith who are most likely to invest in political ideologies to counter threats to meaning in life. Also, the more extreme secular ideologies on both the left and right often involve conspiracy theories, which are cognitively similar to paranormal and supernatural-lite religious substitutes and similarly motivated by the need for meaning.

Importantly, there are reasons to doubt that these various alternatives to religion can successfully meet people’s need for meaning. Modern religious substitutes often reflect the individualism of the West, which is in tension with our species’ inherent social nature. Traditional faiths act as a buffer against the existential threat individualism poses because they activate the social self—the part of us that feels a moral duty to others. And a large body of research indicates it is our deep and enduring connections to others, which traditional religious beliefs and practices help facilitate, that provide meaning.

Traditional religious beliefs are really social beliefs. They are about transcendent connections across space and time. The more these beliefs bind us to family and community, the more they make us feel like we are part of something more enduring and meaningful than our brief mortal lives.

Some people may be disinclined toward religious-like thinking in all respects, but they are likely an extremely small percentage of the population. And I have seen no evidence that the underlying cognitive and motivational psychological characteristics that orient people towards religion and religious substitutes have diminished during the time that the Western world has supposedly become less religious. Instead, most people who imagine themselves as irreligious simply haven’t come to terms with their religious nature. They believe that because they have rejected the faiths of older generations that they have no faith at all. They may simply be unaware of how many leaps of faith they regularly take, and misjudging which ones will allow them to generate meaning in ways that allow humans to maintain a healthy harmony between the secular and the sacred.

Clay Routledge is a Quillette columnist and professor of psychology at North Dakota State University. His writing has also appeared in the New York Times, theWall Street Journal, National Review, and Scientific American. You can follow him on Twitter @clayroutledge

George Floyd and the Rise of the Rival Constitution

Jonathan Kay is Canadian Editor of Quillette, a host of the Quillette podcast, a regular op-ed contributor to the National Post, and a book author.