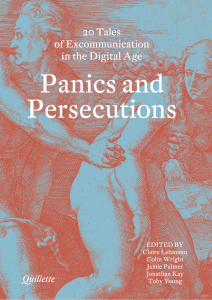 In an age when telling the wrong joke or using the wrong pronoun can cost you your career, Quillette magazine—founded in 2015 by Australia-based journalist Claire Lehmann—has provided a forum for thinkers of all political stripes to push back against the forces of intellectual conformity. Panics and Persecutions brings together a collection of especially compelling Quillette narratives, spanning subcultures from computer science to romance literature.

A limited edition hardcover copy is available to order now.

Early Praise for the Book

“Halfway through this gripping and disturbing book you will vow never to set foot on another university campus. You will recognize that North American academia is in the grip of a hideous mania, a cross between the early-modern witch craze and Mao’s Cultural Revolution, in which implacable zealots conduct grotesque show trials, innocent individuals have their reputations, careers and sanity destroyed, and everyone else cowers, terrified that they will be next to be ‘canceled.’ But then you read on and realize this mania is now everywhere where people with college degrees gather, even if only to discuss knitting.

No journal has done more than Quillette to expose the injustices of the ‘Great Awokening.’ One of many benefits of this invaluable compendium of cancelation is that you begin to see more clearly the distinctive patterns of the pathology.”

— Niall Ferguson, author of The Square and the Tower and Milbank Family Senior Fellow, the Hoover Institution.

“All mobs are the same. Only their victims are different. These essays are a tribute to the world’s sole source of genuine diversity: the unique individual.”

— Peter Thiel, entrepreneur, investor, and author of Zero to One: Notes on Startups, or How to Build the Future.

“For those who feel that academia and journalism are losing their minds, Quillette has offered lungfuls of fresh air—reasoned, nondogmatic, and often common-sense analyses that have been banished from the mainstream outlets. This timely collection showcases some of the new voices it has discovered, while spotlighting the repressive and regressive forces that are imposing orthodoxies on intellectual life.”

— Steven Pinker, Johnstone Professor of Psychology, Harvard University, and the author of The Better Angels of Our Nature and Enlightenment Now.

“We are living through an intellectual crisis.The woke ideology is overwhelming our cultural and political institutions, as well as captivating many of the young minds in our society. But, in these pages, you will find ordinary people standing up for what is right. Our society needs individuals like these who have the courage of conviction and commitment to liberty and equality for all. Each of the 21 essays enclosed provides a portrait and defense of liberal values, not just in revisiting the arguments and principles of a free society, but also in that these individuals are making the arguments at risk of themselves being cancelled, shamed or punished in various ways. They are willing to pay the price to pass the banner of freedom onto the next generation. These authors are living, breathing examples of how to fight for Enlightenment values and how to do it with dignity and civility.”