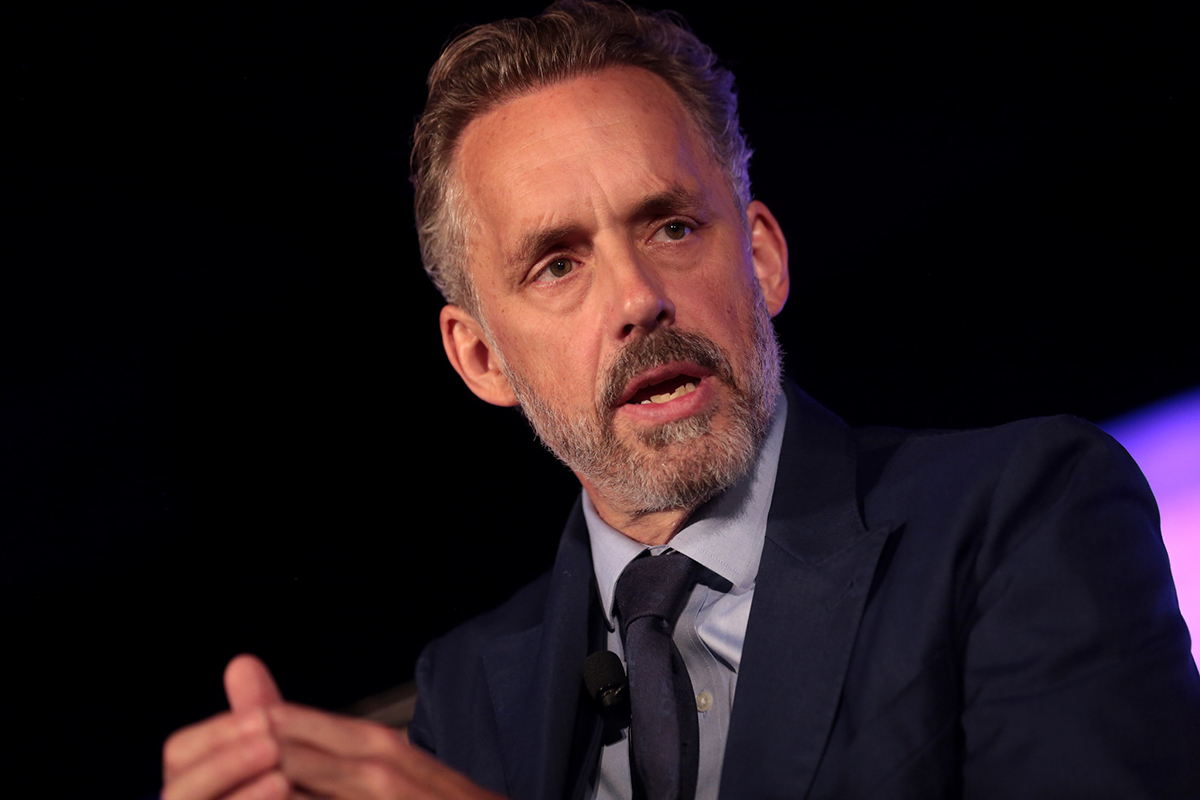 The most shocking moment of the Žižek-Peterson debate occurred during the first five minutes. In Jordan Peterson’s opening statement, he mentioned that he’d re-read The Communist Manifesto in preparation for the debate. This, in itself, wasn’t especially surprising. One of many reasons the event was so hotly anticipated—as Dr. Peterson mentioned, Toronto scalpers were charging more for seats than they were charging for Maple Leafs tickets—was that one of the most important Marxist intellectuals in the world would be debating one of the fiercest critics of Marxism. So, one would expect Žižek’s opponent to brush up on some Marxist classics in preparation for their encounter. The shocking part came a few seconds later when the 56-year-old Peterson casually added that he hadn’t read the Manifesto since he was 18.

Peterson has a deep and long-standing interest in totalitarianism. He’s filled his house with art from the Soviet Union in order to remind himself of the evils of that system. Oddly enough, something similar is true of his Marxist sparring partner. Žižek was a dissident Communist in Tito’s Yugoslavia who quit the Party to protest the ZBTZ trial, and he keeps a portrait of Stalin in his home. While he’s explained the significance of the portrait in different ways to different interviewers, at least part of the idea seems to be that it serves as a reminder of the ways in which the socialist project can go terribly wrong.

Unlike Žižek, Peterson apparently believes that attempts to carry out a political program inspired by Marx’s writings can only go wrong. Before he agreed to debate Žižek, Peterson turned down a similar offer from the Marxist economist Richard Wolff. Although Wolff is a democratic socialist who promotes workers’ cooperatives as “the cure for capitalism,” Peterson has called his introduction to a new edition of The Gulag Archipeligo “an answer to the Richard Wolffs of the world.”

The debate about whether there’s a straight line from Marx to Stalin is an important one, especially given the revival of interest in socialism in the contemporary West. Everyone should want the key participants in that debate to be as well informed as possible. Marxists should want to sharpen their minds by having to confront the best versions of anti-Marxist arguments, while anti-Marxists should want a champion for their position who knows Marx’s writings inside and out. Unfortunately, as he’s shown on many occasions, Jordan Peterson doesn’t fit this bill.

Many critics have taken issue with his claim about the relationship between these two schools of thought. Marxism is, after all, precisely the sort of “grand narrative” decried by poststructuralist thinkers. But what has been less widely appreciated is that Marx was far from an advocate of strict “equality of outcome.” In his 1875 Critique of the Gotha Program, Marx argued that in the earliest stages of a post-capitalist society, individual workers would have to be compensated unequally for a variety of reasons:

[O]ne man is superior to another physically, or mentally, and supplies more labor in the same time, or can labor for a longer time; and labor, to serve as a measure, must be defined by its duration or intensity, otherwise it ceases to be a standard of measurement…. Further, one worker is married, another is not; one has more children than another, and so on and so forth. Thus, with an equal performance of labor, and hence an equal [share] in the social consumption fund, one will in fact receive more than another, one will be richer than another, and so on. To avoid all these defects, right, instead of being equal, would have to be unequal.

Later on, cultural and technological progress would eliminate the need for such disparities. Under capitalism, automation puts people out of a job. Under socialism, Marx predicted, it would just mean that everyone had to work fewer hours. Eventually, he thought that there would be so much abundance that everyone could simply take what they needed, and what little work still needed to be done by humans could be accomplished by everyone just pursuing whatever projects happened to interest them. “From each according to their abilities, to each according to their needs.”

Critics of Marxism will likely roll their eyes at the utopianism of this vision. Some resources, they will argue, will always be scarce. Furthermore, it’s unrealistic to imagine that financial incentives will ever stop being the primary driver of human ingenuity. This is a debate worth having. To have it, though, all the disputants need to know what Marx is—and isn’t—saying. At no stage of his reasoning about how a socialist future might work does he envision anything like everyone having a strictly equal share of society’s resources.

In his opening statement in the debate with Žižek, Peterson said that Marx’s solution to the ills of capitalism was “bloody violent revolution.” That’s not quite right. Marx advocated revolution against the hereditary monarchs who ruled most of Europe when The Communist Manifesto was published. But I know of no passage in his and his collaborator Engels’s voluminous writings in which either man said that socialists would need to resort to a violent seizure of power in an advanced parliamentary democracy where the franchise had been extended to the working class. In, for example, his 1872 “La Liberté” speech to the International Working Men’s Association, Marx is explicit about that distinction.

What, though, about the cases in which revolution was necessary? Marx and Engels talked in a few places about the idea that a temporary “dictatorship of the proletariat” would be necessary to consolidate revolutionary gains. That certainly sounds undemocratic. But what exactly does it mean? As Slavoj Žižek pointed out in Toronto, any historically grounded discussion of “the dictatorship of the proletariat” must reference the real world example that Marx and Engels pointed to in order to illustrate the concept. In 1871, workers took over the city of Paris and created the Paris Commune. All elected officials in the Commune could be recalled by their constituents at any time and for any reason. There was a popular militia instead of a standing army. Factories abandoned by their owners were re-opened as workers cooperatives. The Commune was so radically democratic that it was viewed as a post-revolutionary model by both the Marxist and anarchist wings of the International Working Men’s Association.

Critics of Marxism may argue that radical experiments like the Paris Commune are by their nature dangerously chaotic. Perhaps there are even good reasons to believe that this ultra-democratic model would eventually deteriorate into something as ugly as the Soviet experience. Whatever one thinks about these questions, any reasonable debate has to start from the knowledge that when Marx talks about “the dictatorship of the proletariat” what he has in mind is the Paris Commune.

Capitalism, Poverty, and The Communist Manifesto

Peterson often points out that a great many people have been lifted out of poverty since the early nineteenth century. Here, for example is a tweet from July 2018:

Another reason to hate capitalism. All the poor people keep looking catching up! https://t.co/9FpaVesBXV

Here’s one from April 2019, a couple of weeks before the debate:

More evidence for the evils of private property and trade — you know, capitalism. https://t.co/Vu8IONhVhu

He made the same point on the debate stage in Toronto, this time referencing 1800 rather than 1820 as the starting point. In all three cases, the strong implication was that this point undermines the case of Marxists and other left-wing critics of capitalism. Why should it, though? One of the reasons Marx thought that the transition from feudalism to capitalism was progress is that it allowed the “forces of production” to develop in a way they couldn’t when they were fettered by feudal social structures. The opening pages of The Communist Manifesto are devoted in large part to a celebration of the wonders that had been wrought by that transition.

All fixed, fast-frozen relations, with their train of ancient and venerable prejudices and opinions, are swept away, all new-formed ones become antiquated before they can ossify. All that is solid melts into air… The bourgeoisie, during its rule of scarce one hundred years, has created more massive and more colossal productive forces than have all preceding generations together. Subjection of Nature’s forces to man, machinery, application of chemistry to industry and agriculture, steam-navigation, railways, electric telegraphs, clearing of whole continents for cultivation, canalisation of rivers, whole populations conjured out of the ground — what earlier century had even a presentiment that such productive forces slumbered in the lap of social labour?

In 1820, not only were islands of industry surrounded by a sea of countryside but a great many of the peasants who toiled in Europe’s countryside were (or, at least, had been born as) serfs. Capitalism was just starting to come out from the shadow of feudalism. A fact of far greater relevance to the dispute between Marxists and advocates of free market capitalism is the fact that the rate of extreme poverty has continued to decline two centuries later. Some of this is disputed territory. Is $2 a day or $5 a day a better indication of “extreme” poverty? Should we care about raw numbers or about the percentage of the population that is desperately poor?

In some ways an even more interesting point of contention concerns the role the People’s Republic of China has played in this process. China is full of private businesses these days, but the state continues to play an outsized role in shaping the Chinese economy. If one of the primary drivers of the global decline of extreme poverty is its decline in the People’s Republic, is this a success story for “free market” capitalism or for a modified and liberalized form of state socialism? An answer to that question might shed some light on the deeper issue of whether capitalism continues to be the most effective way of improving the lot of the poor or whether an alternative global system would be preferable. This is a debate worth having, but the pro-capitalist side deserves better-informed anti-Marxist representatives than Jordan Peterson.

Ben Burgis is the author of Give Them An Argument: Logic for the Left, which is available for pre-order from Amazon and Barnes & Noble. He’s also a regular on The Michael Brooks Show on Tuesday nights and he releases videos every Monday for the Zero Books YouTube channel. You can follow him on Twitter @benburgis